2016 has been quite the year for reminders.  So far we’ve been reminded that politics are still guaranteed to break our hearts and estrange us from our uncles, that Tom Brady is still as despicable as he is handsome and talented, and that it’s still embarrassing to poop on the first date – the typical sorts of things.  Far more important than any of these, though, and maybe more important than anything at all: we’ve been reminded in his glorious Netflix-funded return that Pee-wee Herman remains the greatest and most emotionally relevant character in the American canon.

Maybe you missed it, and consult a priest for forgiveness if you did, but Pee-wee’s Big Holiday debuted last week on Netflix.  It’s awesome and you should watch it.  And not just because it’s funny!  And charming!  And tightly-scripted! Primarily because it’s refreshing; it’s the kind of reminder that I’m glad to sit through.  Thirty years after Pee-wee’s big debut, the character still works for all the same reasons he did in the 80s.  Pee-wee’s Big Holiday is a road movie about a particular kind of love that’s easy to lose track of in our competitive market society: gentle friendship between two men.

I went to grad school with three Nepalese men who had known each other basically their whole lives.  When they walked around, they held each other’s hands.  It was really wonderful to watch, and simultaneously uncomfortable to think about.  This kind of unabashed masculine companionship was, on the one hand, inspiring to me and left me longing for that kind of support from my male friends and, on the other hand, cause for a real self-loathing and fear.  Regardless of my conscious thoughts and values, I was raised in a violently homophobic country and simply appreciating two other men holding hands in friendship left me feeling like I needed a The Crying Game-style cold shower.

This is not the sort of thing he has access to in his hometown of Fairville: his friendships are mostly with children or coworkers.  With children, he is able to have unfettered but not entirely meaningful relationships, and with the adults in his life, he can enjoy the commercial fruits of their shared labors but is also kept at arm’s length by the transactional nature of their relationships.  It’s like, I love my camp stove – it’s portable, it has a cool look, and it heats me foods – but I don’t love my camp stove.

When Joe Manganiello blasts into town, Pee-wee is able to make a new kind of friendship with him.  They immediately hit it off on a magical series of Jinxes, but there’s more to this story than chance: Pee-wee is able to move their friendship out of his place of work and into his home, his private sanctum.  Once there, Pee-Wee shows Joe a model of Fairville, of his whole world.  What’s fascinating about this scene is that the model, built by Pee-wee’s mind, is a representation of Pee-wee’s mind.  And while it is a near-perfect representation of his world, it also has one fantastical element: a little model treehouse in his model backyard, one that is not mirrored in reality.  What this treehouse means to Pee-wee is unknowable and unimportant, but what is important is that he hasn’t made it reality, despite professing a real desire to do so.

Joe takes a moment to try and inspire Pee-wee to build the treehouse, and then returns his attention to the model of Fairville.  He asks Pee-Wee what’s beyond the train tracks, that is, what’s going on in the part of his mind that he hasn’t modeled and tamped down.  Pee-Wee is unable to answer, saying he’s never been out of Fairville.  By the end of the movie, Pee-wee will have travelled all over the country, and in the process become acquainted with much of his unexplored self, including some of his darkest parts.  And he and Joe will have solidified their friendship, complete with a trip to Joe’s newly-built treehouse on the roof of his New York apartment.

What is it about their friendship that supports so many giant steps on the part of Pee-wee?  When the two of them interact, they don’t hold themselves back.  In New York, Joe shows Pee-wee the model he made after being inspired by the one of Fairville, and Joe’s, while it contains his world in New York, is utterly fantastic.  There’s a glitter mountain!  He is inviting Pee-wee into parts of his mind that he had to explore, that he couldn’t just take in from what he saw of our world.  And Pee-wee – inventor of the world’s coldest blowoff, “I’m a loner, Dotty, a rebel” – offers Joe a friendship bracelet.  They take in each other’s hidden depths and celebrate them.

Not to be too reductionistic, but let’s ride the elephant in the room for a moment: glitter and friendship bracelets were assigned by market analysts to girls.  If you were at Target, you would find them next to the pink clothes with the bows on them.  And it’s easy to take how things are marketed for how things are, but in this case it’s simply not true.  “Tricky” Dick Nixon lost his first Presidential bid because he was too embarrassed to wear makeup to a televised debate.  Meanwhile, Iggy Pop threw on a dress, invented punk rock, and told the world “I’m not ashamed to ‘dress like a woman’ because I don’t think it’s shameful to be a woman.”  And if none of that rings a bell, throw on your headphones, scootch on over to Youtube, load up the video for Queen’s I Want to Break Free, and get yourself educated before you finish this article.

This speaks to a truth that a lot of folks in America are very uncomfortable with: all people contain both masculine and feminine traits.  This is a big piece of Jungian analysis: we are able to resonate with all of the archetypes we see repeated in stories, even the ones that seem quite different from ourselves, because they are representations of our vast psyches.  If your question here is, “does enjoying Spongebob mean I’m gay”, the answer is: yes, a little (or a lot!).  We all have at least a little of everything going on inside us, that is how we relate to all the people in the world leading lives that are different than ours.  And if this actually worries you, cut it out; the scientist who developed the theory that sexuality was a spectrum was American, which means being gay is patriotic.

Regardless, this is missing the point: Pee-wee isn’t freed up to explore the disowned parts of his psyche because he and Joe are lovers.  Quite the opposite, in fact.  They’re men who are friends, and whose friendship provides a container for their disowned feminine traits.  Joe is manly, Pee-wee is boyish, and yet when they are together they are able to act with a level of intimacy that our society has reserved for women without feeling threatened and without shaming each other.  They’re as close as sisters!  This is scary for American men, and it’s also emboldening, sort of like at the end of Top Gun when Iceman has to remind Maverick that he’s still dangerous before inviting him to be his wingman anytime.

Having a buddy to explore the parts of yourself that society tells you to be scared of is a great thing.  In fact, don’t tell anyone, but that’s all that’s really going on in therapy.  In Pee-wee and Joe’s cases, getting to explore their gentler, more traditionally feminine traits in such easy company is a blessing that leads to deeper satisfaction within the lives they already lead.  Joe, just a little bored of his high class but stifling New York life, is able to truly enjoy his birthday party thanks to Pee-wee’s presence.  And Pee-wee, beloved man-child of Fairville, is able to engage with his already-existing life in a more experimental and creative way.  These aren’t massive changes, no one has ‘found themself’ by the end of the movie.  But, much like how a garnish is just a little slice of orange that classes up the plate, Pee-wee and Joe’s support of each other’s feminine sides fundamentally alters and broadens the experience of being who they already are. 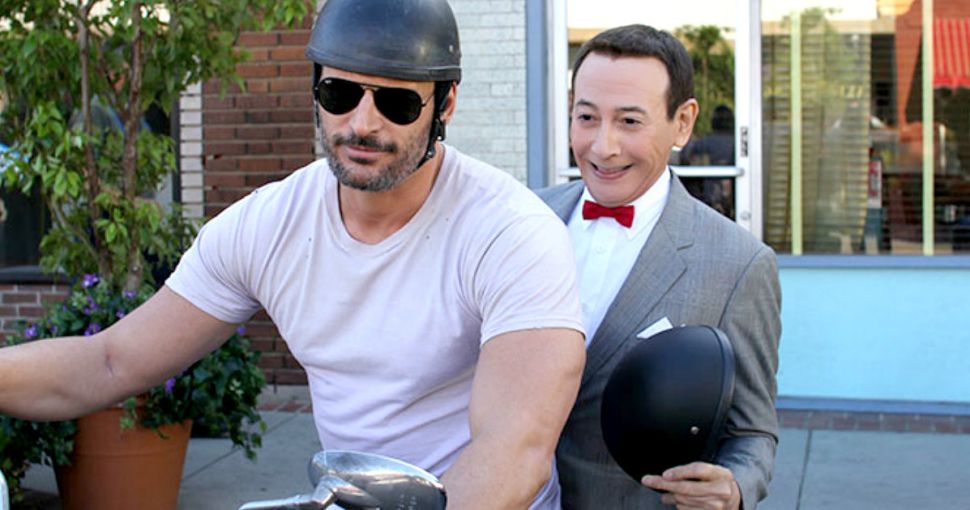