If you’ve seen Scott Pilgrim vs. The World, then you’ll know what to expect emotionally from watching Love.  Much like in that genre-bender action-comedy-romance, Love is a show designed to get you rooting for two people to turn their lusty chemical spark into a bonfire of romance.  By the end of Love’s first season, and particularly its last scene, I felt the same way about Love protagonists Mickey and Gus as I did about Scott Pilgrim and his paramour Ramona – I give ‘em about 6 months.  Here’s two people who are surrounded by better options – the tattoo lady from episode 5 for Gus, solitude for Mickey – but keep choosing the ongoing emotional disaster of being in relationship with each other.

In therapeutic circles, the gallows humor we use to balance seeing relationships at their worst moments is that people come to couples therapy to break up, not to sort things out.  In the same sense, it would be easy to write about how terrible Mickey and Gus are for each other.  But just like how in therapy I don’t give advice, when watching Love no one asks me my opinion.  These two have clearly chosen each other and are embarking down the relational path of getting to the heart of their own shit.  So instead of saying they should start over at square one, let’s meet them where they are.  They’re in relationship, let’s try to understand why that’s a good idea.
[youtube https://www.youtube.com/watch?v=Ym3LoSj9Xj8]

Mickey and Gus meet each other at bad times – Gus has just been cheated on by his long-term partner, and Mickey finds herself getting sucked back into a drug-fueled relationship with a schmuck she already left behind.  Essentially, they meet one another at some deep lows, though it’s important to note not at each other’s rock bottom.  Rock bottom is a term thrown around a lot in addiction treatment circles, and to hear people talk about it it’s a seemingly magico-tragic place where, on account of having already burned all your bridges, you’re free of consequence to try the things you’ve been terrified to try all your life.  It’s an extremely painful and powerful emotional state, and it’s  definitely not where our protagonists are.  These two are more marooned on a ledge in the mining shaft that contains rock bottom, desperate not to fall any further and completely at a loss for how to climb back up.

So it makes sense that when they meet, they stick together for a minute.  They’re facing something that may actually be scarier than the kind of existential dread and death symbolized by rock bottom – sinking back into the “I have no idea what I’m doing” state of being in your late twenties.  Gus has gone from picking out furniture for the house he shares with his partner to moving into his human Golden Retriever of a best friend’s low-quality apartment building.  Mickey has gone from being a person in active recovery from substance abuse with a stable job and secure home to getting high with her idiot ex who sneaks into her room while she’s asleep.  At least if they were dying they’d be through with this shit, but they’re faced with the horrifying knowledge that they’re going to wake up alive and faced with a bunch of choices they don’t want to pick through tomorrow morning.

So the stage is set for an initial spark.  These two look at each other and happily project everything the show so adroitly tells us about in the ninth episode: Gus sees his own disowned courage in Mickey, Mickey sees her own disowned stability in Gus.  The show is content so far to tell us that people shouldn’t look for their own displaced parts in their romantic partners, and that’s true, but it misses something essential.  Most people have to get it very, very wrong before they get it right.  I may have courage inside me, but until someone shows me what’s required to access it there’s about a 1% chance that I’ll be breaking out of my fearful cocoon on my own.  Mickey and Gus do a great job of showing the other what might be required to get off that mine-shaft ledge (hint: it probably requires falling all the way down).

And it works!  Chronic loner Mickey is able to see how nourishing it is to have real friends and to work collaboratively with them.  It’s no coincidence that she has to attend Gus’s house party, even though it “sounds stupid” before she finds herself taking her addiction recovery seriously.  And for Gus’s part, he practically has to be led by the hand into risky situations – not being a perfect/awful gentleman on a date, going to a party where he doesn’t know anyone – before he’s able to start asserting himself even a tiny bit at work.  For a moment, it looks like these two will be able to stand on each other’s shoulders and climb out of this pit.  You know, before they fall apart worse than ever.

That’s the thing with the relational path to not being a total sad-sack mess, it’s fast and it’s messy and it happens right out where someone else can see it.  It’s fucking hard and it hurts the whole time and then when you get through it you can’t imagine how you lived without it.  It probably feels a lot like giving birth to the giant-headed and whiny-yet-loveable baby Paul Rust must have felt back in 1981.  And, much like when you have a baby and realize you probably shouldn’t live your life based on making the lowest-effort choices anymore, when you date someone so that they can sort your life out, eventually you have to start sorting your own life out instead.  If they keep pushing you up to a higher ledge, eventually you’re gonna have to pull yourself onto it, turn around, and pull them up too or break up…you know, whichever…but only one of those options is TV appropriate. 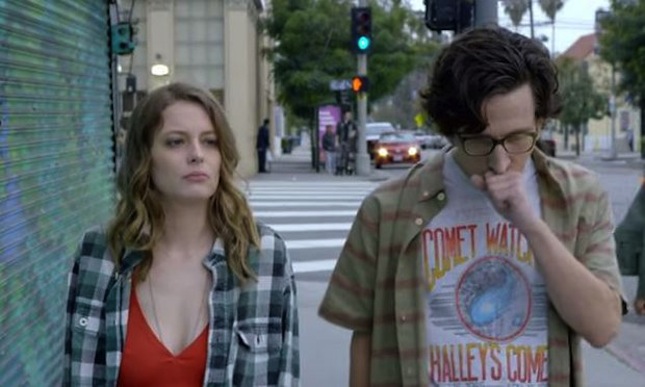