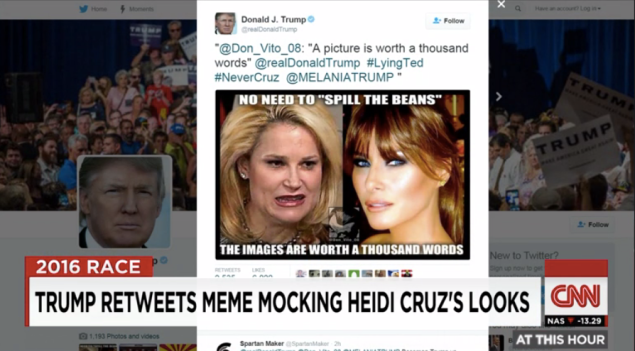 With DVR technology on television, you can record the three cable news channels simultaneously and study how they compete in the same time frame, how they choose what gets covered and how it is presented.

So let’s take a random day (like Thursday) and a random time slot (11 a.m. to noon) and watch CNN, MSNBC and Fox News Channel, back-to-back-to-back.

(First of an occasional series).

CNN After showing the blood and gore from the Brussels terrorist attacks, anchor Kate Bolduan of At This Hour gets caught up in another sideshow of the presidential campaign, with Donald Trump and Ted Cruz trading Twitter punches and counter-punches about their wives.

Mr. Cruz says he is not responsible for an ad that shows an old photograph of Mr. Trump’s wife, Melania, in the nude, from her days as a model, her private parts blurred by TV. The caption says “Meet Melania Trump, your next First Lady. Or, you could support Ted Cruz on Tuesday.”

Mr. Cruz says it came from a political action committee not under his control but Mr. Trump wasn’t buying that. He Twitter-vowed to “spill the beans” on Mr. Cruz’s wife. Later, he Tweeted mug shots of both his wife and Heidi Cruz, the photos placed side by side.

“No need to spill the beans,” Mr. Trump writes as a caption. “The images are worth 1,000 words.” With this on screen, Ms. Bolduan interviews Alice Stewart from the Cruz campaign. Attacking Mr. Trump on behalf of Mr. Cruz, Ms. Stewart says:

“I hate to inform Donald Trump we’re not in a version of his reality TV show. We are running for President of the United States and his action and his behavior is conduct unbecoming of someone who is running for president.”

She says it is “absolutely despicable” that Mr. Trump has “threatened Heidi Cruz” with “another disturbing Tweet” and that Mr. Trump makes “derogatory and insulting comments, repeatedly, against women. This is not just a whim. This is a pattern.”

When Stephen Miller appears on camera to defend Mr. Trump, the senior advisor to the Trump campaign says there was a “vicious, mean-spirited… uncalled-for attack on Mr. Trump’s wife” and that Mr. Trump responded “as any normal person would.”

As Mr. Miller then seizes great airtime to recite a Trump stump speech, Ms. Bolduan smolders on the split screen.

Finally, she breaks through Mr. Miller’s monologue, talking over him.

“Women also want to be taken for more than just what they look like,” she says as he keeps talking. “Tell your boss to stop perpetuating this conversation.”

Earlier in the hour, John Berman narrated a jarring video of the carnage at the Brussels airport right after the bombs exploded on Tuesday. CNN put “WARNING: Graphic Video” on a red background in the upper left corner of the screen.

The video—made by a taxi driver with a telephone camera—was blurry and grainy and that made it only more graphic and startling. Pieces of this film had been shown before in the previous two days but not at this length, almost three minutes.

The camera shows a baby crying beside its dead mother; puddles of blood on the floor, near a single red flower that someone dropped; a  small fire burning across the room.

Through the smoke and dust you can hear the screams of anguish from the wounded—howls, really, echoing in the halls. Mr. Berman narrates minimally. It is like a vision of Hell. The screams say more than his words and he knows it and respects them.

Afterward, Ms. Bolduan asks Tim Lister, “How do security services plan to stop ‘Mother of Satan’ (explosives) from getting into the wrong hands?” and Mr. Lister tells her, “Oh, they can’t. It’s quite simple, Kate.”

Throughout the show, you get a sense of CNN’s deep bench on foreign stories. Early on, Ms. Bolduan throws the show to two different reporters in Belgium and later to one in Turkey.

His name is Arwa Damon and he says Turkish intelligence officials wish to be taken seriously by Belgium next time Turkey warns the Belgians that someone in their nation is dangerous, as was the case this week and even before.

‘You’re going to drive them into the hands of the worst elements… What a gift this would be to ISIS.’ 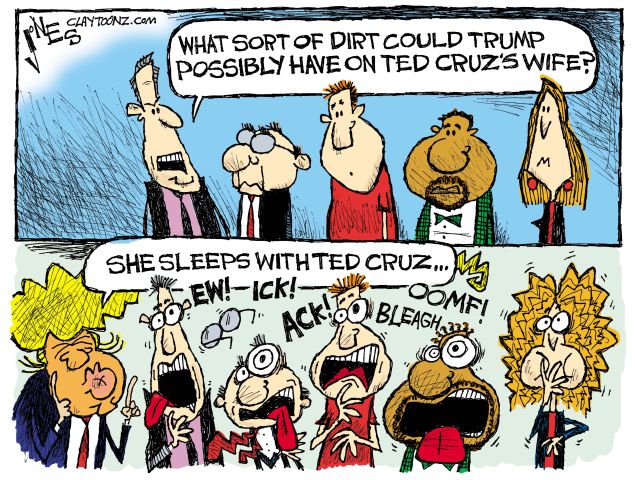 ‘No need to spill the beans.’ (Illustration: Clay Jones)

MSNBC Tamron Hall’s show is dominated at the start by reports from Belgium and one of them is heart-wrenching. It is video clip of a young American woman waiting to hear from her Belgian boyfriend. He called her from the airport, right before the blasts. He was on his way across the ocean to see her.

She hasn’t heard from him since. She is identified as Emily. He is Bart.

“I have hope that, Bart, you are coming home,” she says, her voice breaking. She is surrounded by her family. They look horrified. The last words he spoke to her on the phone were “I love you.” Through the camera, Emily says to Bart “I love you so much.”

While conversing with Erica Hill in Brussels, Ms. Hall notices people on nearby building steps behind her have gathered to sing “Stand By Me.”

In another report from Belgium, Olivia Sterns of NBC walks through a town square with Francoise Schepmans, the mayor of Molenbeek, the area where the terrorists lived.

STERNS: “Did you have any idea they were here, essentially under your nose, for the last four months?

SCHEPMANS: “No, no. Nothing. Absolutely nothing.”

Another report comes from Ketevan Kardava, a TV journalist from the former Soviet republic of Georgia. She took some startling still photos of the blast’s aftermath, including the shot of the wounded basketball player lying on the floor with a damaged leg, and that woman in a yellow jacket, dusty, bloody and dazed, lying across a chair with her shirt ripped open.

Ms. Kardava’s accent is heavy but easy to understand. She is a professional narrator and it shows.

“I had less than a minute to take photos,” she says. “And then the evacuation started and then armed soldiers forced us to leave the territory.”

She says she is making contact with those she photographed and is following their recovery. As she speaks, she occasionally brings her hand to her heart before extending it outward again.

In that ISIS took credit for the attacks, Ms. Hall turns to the suggestion by Mr. Cruz that Muslim neighborhoods in the United States be monitored. Opposing such an idea is Eugene O’Donnell, her guest, who is a professor of law at John Jay College.

“That won’t work,” Mr. O’Donnell says of the Muslim-monitoring proposal by Mr. Cruz, the senator from Texas. “It will spur radicalization, so that’s counter-productive. You’re going to drive them into the hands of the worst elements… You could just imagine how that would alienate law-abiding Muslim Americans to be targeted… What a gift this would be to ISIS.”

‘They’re afraid to investigate—afraid of being accused of Islamophobia… We’re next, sadly.’ 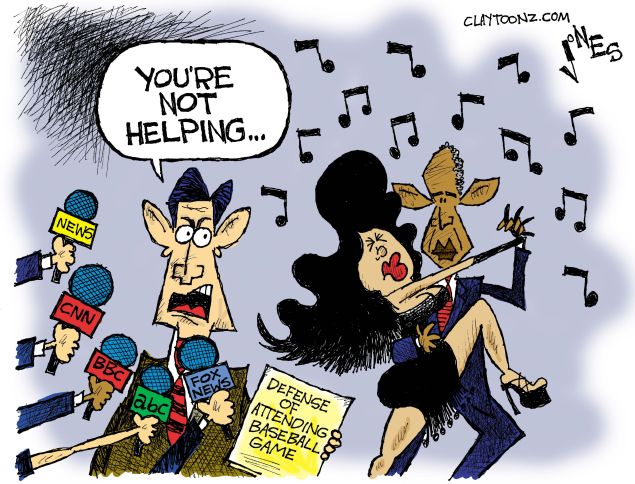 Fox News Channel The Happening Now hour opens with a loud Ding! and the word “ALERT” in yellow letters. But the top story is only that police are searching for the man in the hat in that picture of three terrorists arriving at the airport. This is old news, from yesterday. The other two blew themselves up.

John Scott, who co-hosts this day with Abby Huntsman, warns of “potentially, 5,000 suspects, many of whom are back in Europe now after traveling to Syria.” His first guess is KT McFarland, who worked in the Department of Defense under President Reagan.

She says refugees from the Syrian civil war are providing cover for terrorists migrating to western European nations like France and Belgium.

“They’re hiding within those migrant waves, those refugee waves,” Ms. McFarland says. “So, however bad it is now, it’s about to get a lot worse.”

She compares the jihadists to Nazis in World War II and the Communists in the Cold War.

“We need a comprehensive program with all of Western civilization,” she says. “This president is not going to do it. It’s going to be up to the next president.”

Compared to the other networks, the hour on Fox is much more diversified. They cover the nomination of Merrick Garland for the Supreme Court and other stories. It’s also interesting to see what they don’t cover: Donald Trump and the rest of the presidential candidates.

Instead, there is a lengthy segment about President Obama that shows a picture of him dancing the tango the previous night in Argentina while on a state visit. Ms. Huntsman—in the time-honored Fox way—starts with a loaded pseudo-question that implies the president should have cut short his Latin American trip to come home after the attacks in Belgium.

“President Obama is facing a lot of criticism for what some are calling an inadequate response,” she says. “Optics matter.” Her guests are Colleen McCain Nelson of The Wall Street Journal and Melinda Henneberger, the editor-in-chief of Roll Call.

Neither seems to buy the premise of the host.

“Fairly or unfairly, these optics have find of given his critics ammunition,” Ms. Nelson says.

“He would have been criticized either way,” Ms. Henneberger says. “I understand what’s he’s attempting to do.”

Next comes the guest Dan Bongino, a former Secret Service man, among other things.

He’s selling a book and says he hears from his police sources that American police are afraid to do their job against terrorists because of political correctness. This is a constant meme on Fox.

“They’re afraid to investigate, afraid of being accused of Islamophobia,” Mr. Bongino says. “You have a very dangerous cocktail. These attacks are almost impossible to stop… We’re next, sadly.” 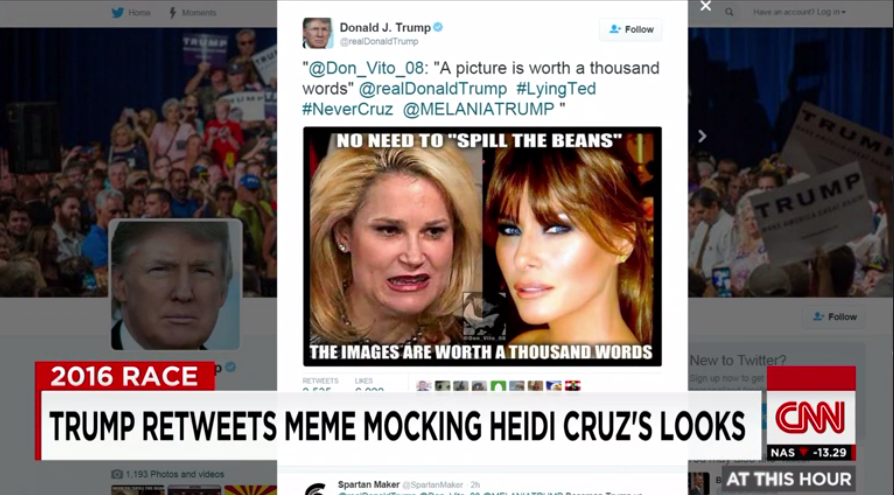