Last week’s premiere introduced us to our new best friends. But like any young relationship, first impressions can be misleading. You gotta have some sleepovers. Spend some time with the crew. Mix it up. Guzzle at the pool. Take a few to-go cups on a spin around the Vegas strip. You know, mingle. Pop the bottle and so on.

My fourth fave Baywatch babe after Nicole Eggert, Dione, with his long flowing hair and his closet full of Whose Line Is It Anyway? props has found himself dead smack in the middle of a love triangle. Kailah, who has previously sworn in the last episode that Dione gave up his one shot at hooking up with her, thinks he’s kind of dreamy. Sabrina, who is a guy’s girl but also too much for a guy, likes Dione because he continually shoots her down and she admittedly wants whatever she can’t have. It could even be a love quadrangle because Dione has an “ex”-girlfriend at home, Amanda (Please), they call her Amanda “Please” in parenthesis as in Weezy F. Baby Please Say the Baby. Dione calls her his girlfriend but when Ceejai calls him out on it, he’s like “I meant ex obviously but seriously she’s super hot so much hotter than anyone else here so like I’m gonna go lay in my hammock I packed to come with me to Vegas.” He swerves so hard, it’s got a lead role in the next Fast and the Furious movie. Amanda (Please) and Dione only dated for four months and she’s coming to visit in a few weeks, which at least makes her a Real World ex-girlfriend, which is to say “a current girlfriend who is going to get really mad when she comes to visit and finds out he hooked up with this roommate she’s been pretending to be nice to since she got here.” Although, from what we see of Amanda (Please) she’s probably not going to pretend to be nice to anyone because Dione introduces her to Jenna, one girl he isn’t in a love triangle with, and Amanda (Please) says “hi” and then rolls her eyes so hard it’s like when that naked lady statue shoots laser beams at Atreyu when he tries to cross the Sphinx’s Gate in The Neverending Story. Ceejai makes a bet for $100 with Dione that he’s going to sleep with Sabrina but Dione swears he’s not that dude to say he’s not going to do something and then do it.

In the midst of all this love triangling, the roommates get their first clue. Chris was right to think those icons on the wall were their missions because “DRAG” pops up on the computer. In Dione’s pre-show interviews, he told the producers that him and his friends like to go out in Cape Cod in drag. So the three guys, Dione, Chris, and Dean have to dress in women’s clothing to go out that night. Dean is not pumped because of the pressure of upholding heteronormative stereotypes as a straight man of color. But Dean has been skulking around the house in a bear costume that Dione brought so he could use with a night out. Chris is sort of pumped but because he is still shaking off his conservative upbringing he feels conflicted about it. Dione is ready to get to thrift store to get his outfit popping. I will give Chris credit as he tries to be thoughtful about the experience. He doesn’t want it to seem like he his making fun of drag, he wants to honor the community. Chris seems pretty thoughtful so far. The girls give the guys full makeovers, including Ceejai putting the full-face contour onto Dean and everyone is ready to go out.

Dione in a dress is just too much for either Kailah or Sabrina to handle. As a magical van appears out of the ether to take them to their third or fourth spot of the night, a drag show, everyone is lit up like that sparkler the waiter brings you when you buy a table and they bring you a handle of alcohol and an ice bucket. In the van, Jenna gets on the stripper pole and then makes out with Kailah. Chris screams out “everybody is bi-sexual at the end of the night” and then he kisses Sabrina. Dione and Kailah kiss so you’re like oh okay he chose the hypotenuse of the triangle but then Dione and Sabrina kiss and you’re like oh no wait maybe this is an isosceles again? But that is short-lived. Dione makes it clear that he is not interested in Sabrina when he makes out with Kailah directly over her body at the club. They’re in a booth. Kailah, then Sabrina in the middle, then Dione. Kailah leans over Sabrina. Dione leans over Sabrina. And they make out tunnel style.

The next morning, everyone is very hung over. Dione, who was on “autopilot” doesn’t remember that he and Kailah made out the whole way home. Neither does Kailah. The camera guy forces them to turn on the light to get a better shot, which is hilarious because they’re all really feeling totally faced and he has no mercy, it’s all about “the shot” and I respect his craft so much. Sabrina runs out of the room to throw up and when she comes back she tries to get a cuddle in with Dione who actually crawls like every dude in an army movie going under barbed wire, off the side of the bed and onto the floor to avoid the cuddle. Sabrina wants to know why Dione won’t “bang her.” He keeps saying it’s because she has blonde hair. Sabrina wants him to know her hair is not really blonde. Dione isn’t convinced into having sex with her still.

But Sabrina is about to be out of the love triangle. She gets a mission called “FIND.” Last week, we learned that Sabrina is adopted and her biggest fear is meeting her birth mother. Well, guess what? Her clue is a number for a private investigator who is going to help track down her biological family. The woman that gave Sabrina up for adoption actually got in touch with her adopted family three years after they took in Sabrina and put up Sabrina’s biological sister for adoption to them as well. Neither girl has ever met their birth parents. Jon from Elite Investigations, Las Vegas is going to find them. When Sabrina calls her adopted mom to get info for Jon, her mom is very concerned that Sabrina has gone full blonde. Is nobody on this season okay with blondes?!? But the whole plot line following Sabrina’s family stuff is very emotionally intense and it’s gotta be a trip going through this at all, let alone on television.

With all of this going on, Sabrina bows out and decides to help Kailah with Dione. She asks Dione if he likes Kailah. He does but he doesn’t want anything serious. Kailah doesn’t either. That night, they sleep together. Jenna is in bed next to them and leaves the room because she feels uncomfortable, probably when she hears Kailah say “come here you effin’ carny” which is either the most sexy or least sexy thing ever said, I truly can’t decide. The next morning, all of the roommates are giving Kailah a hard time about her late-night moans. Ceejai is mad because she lost her $100 bet. Kailah gets into a screaming fight with Jenna and tells her nobody in the house likes her. And that’s how it ends.

Oh wait, no also, Ceejai goes to the bathroom with he door open. Like always. That’s just a thing she does.

So far, I think they’ve gone a little big, I mean second episode sex is pretty big but they’re not BIG big yet. We’ll see what happens with Sabrina’s family. Dean said his biggest fear is getting stranded in the ocean, so maybe that will happen too…we shall see who goes the biggest and who goes the homest. 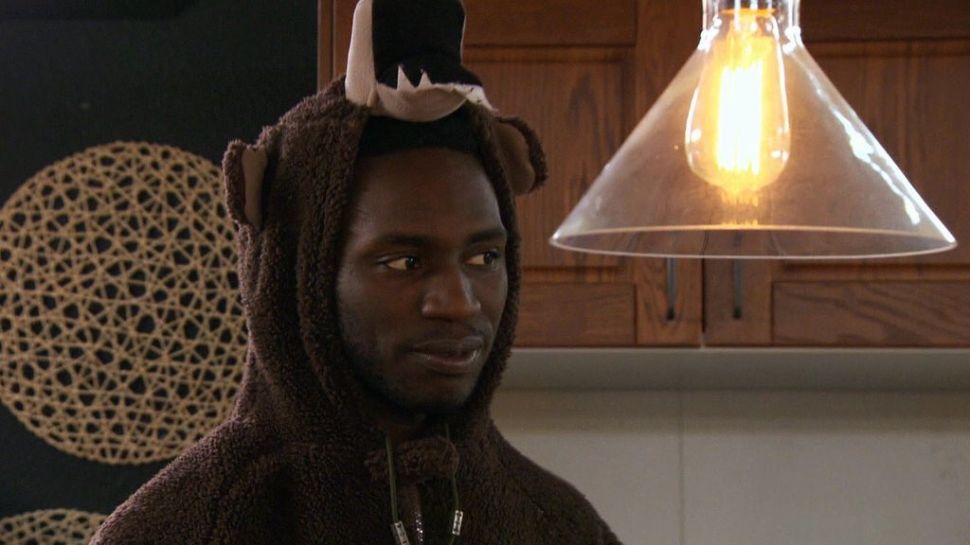