Sir George Martin was one of the cultural giants of his era. The world changed because of the Beatles, and more than any single person—more, even, than the members of the band—he made the Beatles possible. Martin didn’t just sign the Beatles, and he didn’t just produce them: He handed them the keys to the kingdom of invention (as no one else could have), and acted as their protector and guide as they made the magic that was a definitive element of our time.

Would there have been a Beatles with George Martin?

Would we have heard of the Beatles without George Martin?

It’s possible, but far from likely. The Fourmost were signed to a major label, too, and were even managed by Brian Epstein, but I don’t see Cirque De Soleil saluting their music. Howie Casey and the Seniors were considered one of the greatest acts in Liverpool, but I don’t recall Dave Grohl ever dueting with Howie Casey.

Absolutely not. You can point all you want to the very real genius of Lennon and McCartney; but unless someone tells them that their wildest musical dreams can become a reality, and actively nurtures, nudges, inspires and fuels those dreams (while shielding them from the budgetary limits and artistic interference applied to virtually every other act of their time), the Beatles might not have had greater status than the Swinging Blue Jeans (who made a cracking, chiming, harmony-filled debut album that is arguably a better disc than Please Please Me).

Producer George Martin saw something in the Beatles that they could barely see in themselves.

A genius that falls in the forest—or just stumbles out of the forest, Kasper Hauser-like—and sings a song written by someone else or paints a reproduction of someone else’s painting may never be recognized as a genius; but you hand Kasper Hauser an earthly heaven’s worth of tools, encourage him to do with them whatever he dreams (while you guide him carefully), well that’s something else entirely.

The Beatles were Kasper Hauser. They stumbled out of a Northern forest full of jangling bands driven by a big beat and close harmonies, but unlike all of their contemporaries, Sir George Martin handed them the keys to the kingdom.

And only George Martin held the keys. Not only did Martin give the Beatles the keys, but he also provided the bricks and mortar to construct castles absolutely unimaginable up until that time.

These events are so long ago (to put it in perspective, there is as much time between Please Please Me and now as there was between Please Please Me and Henry Ford’s invention of the Model T) and take place in such a radically different cultural and technological environment that it requires some effort to give Martin’s titanic achievements any perspective. I shall try, in a very small and compact way: In the early-ish 1960s, bands were signed by A&R people, most of whom also functioned as staff producers. Nearly without exception, these pop producers/A&R people provided their acts with their entire repertoire, and very carefully constructed a sound that relied in equal parts on economy (i.e., studio budget) and the relatively limited expectations of the record label and the marketplace.

But some kind of weird spark was ignited between Martin and the savage young Beatles; it was not entirely unexpected, considering Martin’s pedigree (more on that shortly), but it was unprecedented: Martin saw something in the band that they could barely have seen in themselves.

There will never be another George Martin. There can’t be. The wheel can only be invented once.

He correctly interpreted their insouciance and energy as the seeds of genius and originality, so he opened the door to creative and stylistic adventure and invention as no other producer would have or could have (with the possible exception of Joe Meek, and in America, Phil Spector, Nick Venet, and Jack Nitzsche; but none of these sages had anything remotely like the Beatles to work with, and nor were they looking for wildly inventive artists who wrote their own songs—and yes, Venet’s Beach Boys are an exception, but that is another very long story).

There will never be another George Martin. There can’t be. No one will ever be handed a blank canvas as open to musical and cultural change as the landscape of the early/mid 1960s. The wheel can only be invented once.

Certainly, producers have shaken the earth since George Martin, and without a doubt will shake it again; but the causes and conditions that led to the Beatles only existed once, and can never exist again. You can pretend to be George Martin—the largely insufferable Jeff Lynne has made a career of this—but the moment in time that made the Beatles so richly original and influential can never exist again. To be the next George Martin, you can’t just remake “Tomorrow Never Knows”; you have to invent something that would sound as radical to today’s listeners as “Tomorrow Never Knows” would have sounded to someone who only listened to Connie Francis.

I mentioned that there was something in Martin’s pre-Beatle life that made him uniquely suitable to his role as co-pilot of the future of the world. From the beginning of Martin’s career as a producer at Parlophone in 1953, he had worked largely making comedy records. This bought him into active and direct contact and collaboration with some of the most inventive and pioneering geniuses of his time—most notably Spike Milligan, Peter Sellers and the Goons, and Peter Cook, Dudley Moore, Alan Bennett, and Jonathan Miller of Beyond the Fringe.

Without going into an enormous fanboy sidebar about the evolution of British comedy, let’s say that these artists—specifically Milligan and Cook—were inventing and forever changing the future, in much the same way that the Beatles later would. Milligan and Cook used language and constructed humor in ways that were as revolutionary to comedy as the Beatles would be to music (to cut a very long story short, Milligan and Cook, working separately, literally invented what we know and recognize as British humor; specifically, Milligan inserted a Dada-like absurdity into comedy, whereas Cook integrated Milligan’s pioneering irreverence into a cool, hipster re-alignment of sketch comedy).

Not only did Martin’s work with these comic artists make him very open to wild invention and spontaneity (via Milligan) and a user-friendly and sexy revision of existing forms (via Cook), but in a very real and tangible way (that has been documented elsewhere, but not nearly enough!), the young Beatles’ affection for the comedians Martin worked with, coupled with Martin’s ability to see in the Beatles the same qualities of invention and rebellion that he had seen in the comedians he produced, made the extraordinary creative partnership between Martin and the Beatles possible.

And don’t call George Martin the Fifth Beatle, an inaccurate and over-assigned term that mutes Martin’s actual, equal-or-greater role in shaping the Beatles. Listen, there are five men (and only five men) who can accurately be referred to as Fifth Beatles: Stuart Sutcliffe, Pete Best, Jimmy Nicol, Chaz Newby and Tommy Moore.

Martin was far more than a fifth Beatle. He was the person who led them into the promised land of musical adventure and cultural resonance, the co-artist and co-pilot who encouraged and allowed them to go out on wild and heretofore inaccessible creative limbs, while at the same time containing and taming their vision so it could be accessible enough to attract a planet’s worth of converts (in other words, there’s a long way between “Magical Mystery Tour” and “Sister Ray”, though both are equally revolutionary).

He was John the Baptist. He enabled the conversion of four beat musicians into artists and messiahs. The seeds of genius may have lay within the brutish and beautiful bulbs of Lennon and McCartney, but at that time in history, there was literally one and only one man who could have watered and nurtured these seeds to germination, and that was George Martin.

(And I am very damn sincere about that John the Baptist analogy. I consider it entirely probably that the Beatles will one day be deified, their words and music turned into scripture and liturgy, and the characters in their story assigned quasi-Biblical places in the canon. For instance, brilliant, undervalued Yoko can be cast as Judas—remember, Judas made Jesus’ immortality and ascension possible by bringing about his death—likewise, Yoko’s role in bringing about the Beatles defenestration prevented the Fabs from receding into a future that may have greatly muted their holy effect. I mean, have you ever considered how lucky we are, and how different history might be, if the Beatles had stumbled on to make their equivalents to Face Dances or Bridges to Babylon?)

A world without the Beatles is inconceivable. They changed the course of pop—and popular culture—as perhaps no other artist ever has (the only artist that might be remotely comparable would be Louis Armstrong). It is arguable that not all these changes were for the better (I have written elsewhere that the Beatles’ ubiquity literally dammed the raging river of American rock, stopping dead in it’s tracks the natural evolution of an American rock and roll based in traditional Celtic, West African, and rural American forms), but let’s not consider what the Beatles took away.

We are here to honor the fact that Sir George Martin’s impact on the world-changing Beatles was equal to, and perhaps even greater, then the contributions made by their bold and brilliant individual members. I’ll underline this again: the Beatles as we know them are not remotely conceivable without George Martin. Any other producer would have handed the Beatles a pencil and a very standard coloring book, and told them to stay within the lines; Martin handed the Beatles a universe of paints and a very, very wide canvas, to be renewed and reinvented for every moment of their collaboration.

And try to imagine a world without the Beatles. Consider your life without the beacon of friendship and portal to the land of music they provided. Sir George Martin made that possible. 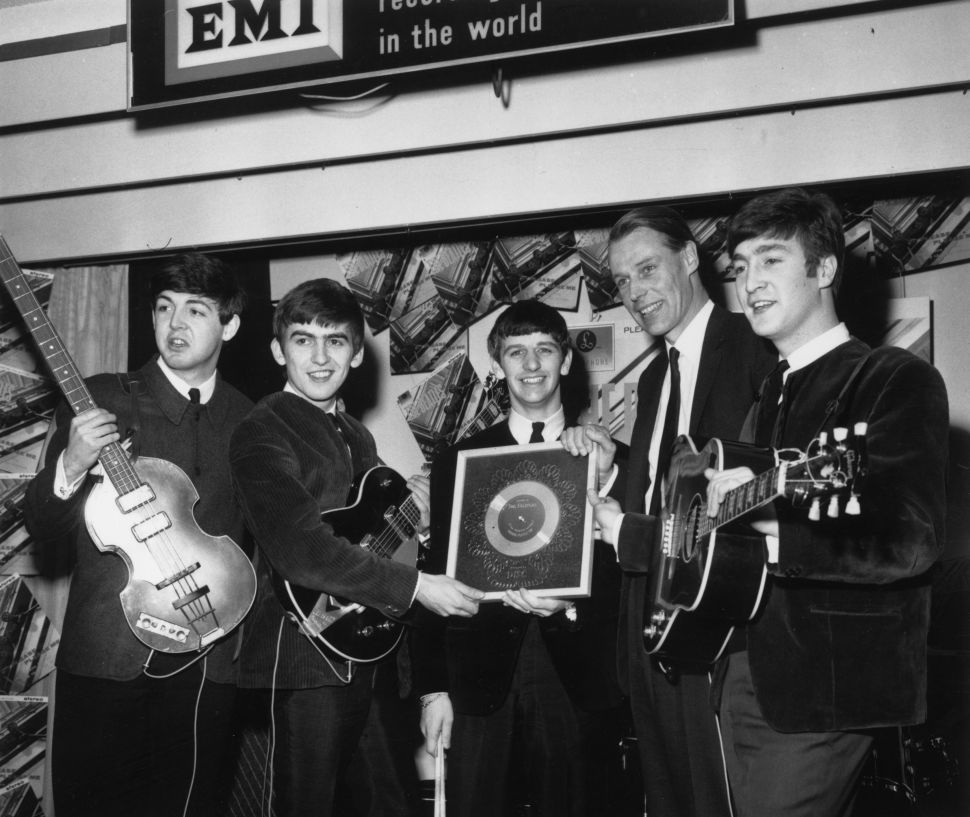