Republicans recoiling from Donald Trump may have stumbled upon an idea to stop him that is so diabolically cunning they might not yet even realize how clever—or how dangerous—it is.

In fact, it might be too clever by half.

Last week, The New York Times floated an idea circulating in Republican circles about possibly launching a third-party presidential bid in the event that Donald Trump secures the party’s nomination.

The article focuses on the desire of some in the GOP to put forth a choice for Republicans who cannot bring themselves to vote for Mr. Trump but also cannot support the Democratic nominee, who most presume will be their longtime nemesis Hillary Clinton. But it does not get into the mechanics of how such a third-party bid could actually block both Mr. Trump and Ms. Clinton and put a more acceptable Republican into the Oval Office in 2017.

However, longtime political analyst Taegan Goddard, the founder of the Political Wire website for political news and analysis, has suggested that such a third-party campaign by GOP regulars need not necessarily mount a national effort to achieve this result. The renegade Republican ticket would only need to win enough states to prevent either Mr. Trump or Ms. Clinton from attaining the necessary 270-elector majority required to win.

Here, some knowledge of the U.S. Constitution, and what it says about presidential elections, comes in handy. In the event that no presidential candidate gets 270 of the 538 total electoral votes, the U.S. House of Representatives chooses the president. Each state’s House delegation, regardless of number, gets one vote, with the votes of 26 state delegations required to elect a president.

It is difficult to see, short of a massive Democratic landslide, where the Republicans realistically could lose control of eight House delegations they currently hold.

Currently, Republicans control 33 delegations, Democrats control 14, and three are tied. Even if the Republicans lose a modest number of House seats in the coming elections, it is more likely than not that they will still control at least 26 House delegations when they convene in January 2017. It is difficult to see, short of a massive Democratic landslide, where the Republicans realistically could lose control of eight House delegations they currently hold.

The 12th Amendment to the Constitution also stipulates that the House must choose from among the top three finishers in the Electoral College. A third-party Republican candidate who received at least one electoral vote would qualify for the House election (presuming no fourth candidate received a larger number of electoral votes; more on this later). If such a third-party effort could deny victory to both Mr. Trump and the Democratic nominee, and land a more acceptable Republican candidate in the top three finishers, House Republicans could choose the renegade GOP candidate as the next president.

Here is one way that anti-Trump Republicans might accomplish this feat: Target only the seven states that went Democratic by fewer than six percentage points in 2012 (Florida, Pennsylvania, Ohio, Virginia, Colorado, Iowa and New Hampshire), with the goal of winning at least Florida, Ohio, Virginia and one of the other four states. If all the remaining states stay with the party they supported in 2012, this would send the election to the House and give Republican Congressmen an opportunity to elect a GOP president who isn’t named Donald Trump.

It would be a longshot, but consider this: Ms. Clinton and Mr. Trump, if nominated, would present a matchup of two candidates with low favorability ratings. According to a Gallup survey taken in January and February, Ms. Clinton has a rating of 41 percent favorable, 53 percent unfavorable, and Mr. Trump’s numbers come in at 31 percent favorable and 63 percent unfavorable. Imagine a renegade Republican candidate, backed by large donations from deep-pocketed Republicans, running in just six or seven swing states as an alternative to two unpopular candidates—perhaps at the head of a “unity ticket” with a moderate or conservative Democrat as the vice-presidential running mate. It is not inconceivable that such a ticket, pouring hundreds of millions of dollars into a handful of states, might have at least an outside shot at forcing the election into the House.

There are, of course, potential complications. First and foremost, there is the possibility that a third-party Republican candidate would only split the pool of votes available to Republicans in the targeted states, cementing a Democratic victory. There is also the possibility that a moderate Republican might win independent voters and even some conservative Democrats, but not significantly dent the populist uprising buoying Mr. Trump, thereby delivering him an electoral vote majority and the presidency.

There is also another risk inherent in such a strategy. According to FairVote.com, there are nine states, among those states that conceivably could vote Democratic in November, where electors are not bound by state law to support the candidate to whom they are pledged as a result of the November election. These states are Illinois, Iowa, Maine, Minnesota, New Hampshire, New Jersey, New York, Pennsylvania and Rhode Island.

Let’s say that a third-party Republican effort to win the electoral votes of Florida, Virginia, Ohio and at least one other state that went Democratic in 2012 were to succeed, and both Mr. Trump and the Democratic nominee were to fall short of the 270-elector threshold for victory. For this example, we’ll use Colorado as the fourth state. The Democrat, retaining all other Obama states from 2012, would have 263 electoral votes, while Mr. Trump would have 206, and the third-party Republican candidate would have 69.

At this point, the Democrats could engage in some trickery of their own. If the party could convince at least 70 of its nominee’s electors to vote for another Democrat besides the party’s nominee, that second Democrat would qualify for the House election, and the third-party Republican candidate would not. With 111 electors available in the nine Democratic states where electors are not bound by law to their party’s nominee, it would be entirely possible to achieve this, leaving Mr. Trump with 206 electors, the Democratic nominee with 152, and the second Democrat with 111. With only 69 electors, the second Republican would be ineligible for the election in the House, and Republican delegations would be forced to choose between Mr. Trump and two Democrats—possibly Ms. Clinton and Bernie Sanders, or Ms. Clinton and Vice President Joe Biden.

And then, there is one other potential complication. In the event that nobody gains an electoral majority, the Senate selects the vice president, and it is limited by the 12th Amendment to a choice between the top two finishers. While the House is electing the third-place finisher as president, the Senate would be constitutionally obligated to choose the running mate of another candidate as vice president.

Further complicating matters is the possibility that the Senate might be controlled by Democrats next January. Such an eventuality could mean the election of a Republican president and a Democratic vice president. Having a president and vice president of differing parties can be politically problematic, as it was in the early days of the republic, when the constitution stipulated that the runner-up in the presidential election became vice president. After the closely fought 1796 election, Vice President Thomas Jefferson used his office to snipe for four years at President John Adams, whom he then defeated for the presidency in 1800.

These possibilities may be why Republicans ultimately decide that the devil they know, in the form of Donald Trump, may be better than the devil they don’t. But if it begins to look like a Trump candidacy might pull down their entire tent, with downballot reverberations threating Republicans up and down the ticket, a renegade GOP third-party presidential run might be a risk some Republicans are willing to take. 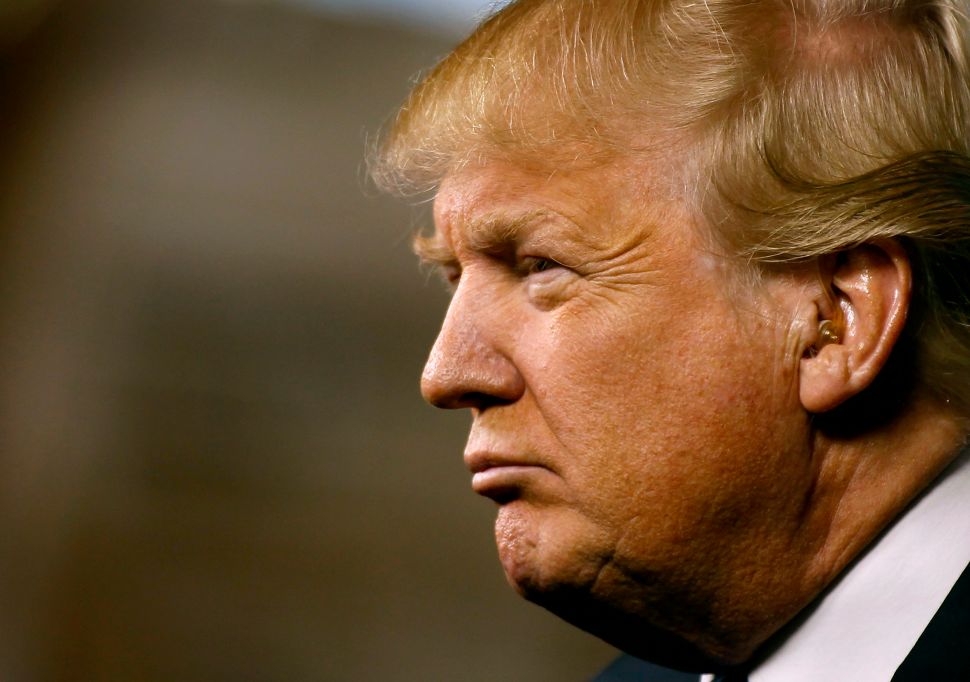