Former Mayor Rudolph Giuliani said tonight he would campaign for Donald Trump in New York’s primary next month—but only if Ohio Gov. John Kasich is out of the race.

Speaking after an unrelated event in Chinatown, the former Republican mayor and Trump confidante said that he would stump for the front-runner in their mutual home state if Texas Sen. Ted Cruz is the only other candidate in the contest. Mr. Giuliani, who led the polls in his party’s 2008 presidential primary before falling to Arizona Sen. John McCain, said he was still “thinking about how, when and the right way to do” an endorsement.

“If the primary is between him and Cruz, I’ll support him,” he told the Observer. “But I certainly think he’s a better candidate than Cruz. But Kasich is still in the race, and I have a lot of respect for Kasich.”

Asked if Mr. Trump, who has never held elected office before, was qualified to become the leader of the free world, Mr. Giuliani pointed to the billionaire’s surprising success on the campaign trail so far.

“I think Donald Trump has surpassed all expectations. There’s no reason to believe he won’t surpass that expectation,” he said.

New York has a rich trove of 95 delegates, all of which could go to the Queens-born developer if he wins more than 50 percent of the vote statewide. Polls indicate he could draw 45 to 54 percent of the electorate.

Mr. Trump currently leads his two rivals with 680 delegates. Mr. Cruz trails with 424 and Mr. Kasich has 143. To clinch the nomination before the convention, Mr. Trump would need to collect 1,237 delegates in all—an effort many Republican operatives hope to obstruct, believing that Mr. Trump’s anti-immigrant rhetoric could alienate key constituencies.

Mr. Giuliani also commended his successor, former Mayor Michael Bloomberg, for deciding to sit out the presidential race. The billionaire independent had teased he might run before concluding he did not have a path to victory—which his fellow ex-mayor agreed with, given intense party loyalties in much of the country.

“There aren’t enough states for an independent to win,” Mr. Giuliani said.

The former mayor was in Chinatown to make a speech at a fund-raiser for Republican businessman Lester Chang, running in a special election for the seat of disgraced former Assembly Speaker Sheldon Silver. The special election will be held on April 19, like the presidential primary, and Mr. Giuliani argued the competitive national race would bring out GOP voters (Democrats believe it will bring out many, many more votes for their party).

Mr. Giuliani took a moment during his speech to reflect on his own bygone ambitions.

“Who knows, maybe I could’ve been president?” the former mayor said, to applause from the crowd. 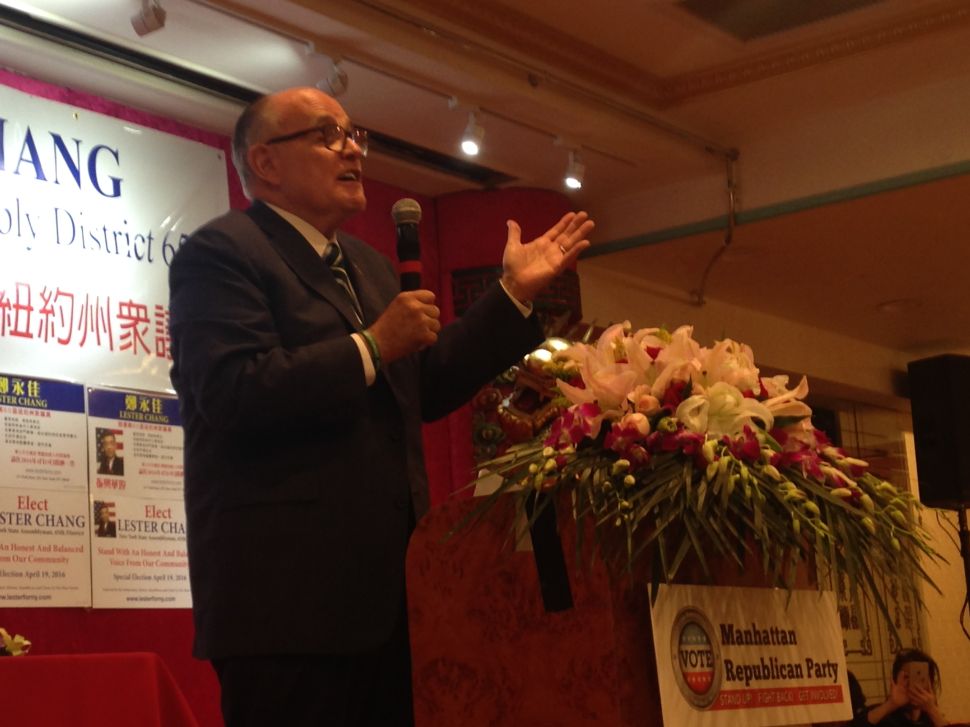