[youtube https://www.youtube.com/watch?v=dm6u4voY44g]
As a general rule, I’m pretty hard on the way Sarah Koenig has structured Serial Season Two. I’ve complained about how it sat on information vital to the case of Bowe Bergdahl for episode after episode, how it stretches a straightforward story into reed-thin complexity, how it crams in entire installments that should either be the focus of their own report or left out entirely. So you’d think I’d question her decision to save the news she broke at the end of “Thorny Politics,” this week’s ep, for the final moments of the hour—or indeed, for the freaking tenth episode of the season. If no less an Obama Administration authority than Defense Secretary Chuck Hagel testified under oath before Congress that he had no evidence any soldiers were killed during the search for Sgt. Bergdahl, despite never ordering the armed forces to conduct an investigation that could confirm or debunk this, that’s the kind of scandal you lead with, right?

Well, let’s hold our fire. Because instead of kicking off the ep with what the Serial team uncovered about the claim, she leads with a callback to the clip of Donald Trump that had been part of the season’s opening credits, in which he yearns for the good old days when “deserters” like Bergdahl were shot. This man, as you know, is the presumptive Republican nominee for President of the United States of America, barring a convention coup by party stalwarts unprecedented in modern times—a prospect he’s hinted would cause his followers, whose violent outbursts he’s encouraged at rallies and offered to cover for financially should legal troubles arise, to riot. Juicy, topical stuff, to be sure; if it bleeds, it leads, right?

But there’s more to it than that, I think. Between the Trump stump speech calling for Bergdahl’s death and the revelation that the Obama Administration blew smoke up the ass of a Congress it had already kept in the dark about the deal with the Taliban that saved Bergdahl, Koenig describes how highly, hotly politicized Bergdahl’s case became. That story, which climaxes in the apparently unsupported claim no soldiers died tracking him down, goes a long way toward contextualizing the crisis America now finds itself in—a state of political paralysis and paranoia custom-made for a demagogue to dominate.

The trouble with Bergdahl’s release and return was twofold: part publicity, part politics. Almost to a man, his fellow soldiers, up to and including members of his platoon, were supremely pissed off at him for wandering off base, getting himself captured, and putting them all at risk during their attempts to find him again. Whether or not this meets the lawbook definition of “desertion” is largely immaterial — they hate this shit, and given all we know about Bergdahl’s Don Quixote-esque ideas and ideals, rightly so. So when his release was announced not with understated press releases from the White House and Pentagon but with a grand Rose Garden press conference, followed by a Sunday talk show appearance by National Security Advisor Susan Rice in which she stated Bergdahl “served the United States with honor and distinction,” it was salt in the wound to soldiers who felt that, bare minimum, some statement regarding further investigation into the circumstances surrounding his disappearance was not only warranted but required.

From there, things snowballed. Sensing an opening, Republican PR flacks immediately started getting Bergdahl’s disgruntled comrades on TV to talk about their outrage, with Fox News serving as the logical staging ground for much of it. Even as some of the initial complainants backed away and started avoiding the cameras, the allegations against Bergdahl mounted in jingoistic, xenophobic, largely fact-free fashion, with Fox’s report that he’d become a Muslim and declared himself “a soldier for Islam” being only the most flagrant example. Both well-meaning soldiers and calculating GOP politicos took the Rose Garden ceremony—an almost impromptu incident spurred by the presence of Bergdahl’s parents in Washington and the elation of the staffers who’d worked to secure his release, understandably myopic about wider perception—and the “honor and distinction” comment—basically a boilerplate bromide Rice uttered without thinking—and hung it right around the Obama Administration’s neck. And since Obama himself was seen by large swathes of the right as a bigger traitor than Bergdahl could ever be, the former prisoner was guilty by association with the president at least as much as the other way around.

But the trouble began long before the homecoming. For years, Republican senators and congressman had alternated between tough-guy posturing and pants-pissing panic regarding everyone interned in America’s warcrime-on-the-Caribbean, the prison at Guantanamo Bay. Many were unlikely to approve of a prisoner swap under the best of circumstances, much less when the prisoner for whom we were swapping rested beneath a cloud of suspicion. While the Republican-controlled House Armed Service Committee had no veto power over the decision, the Department of Defense was obligated by law to give them 30 days notice prior to any detainee release—and any inkling such a deal was underfoot would likely lead to leaks that would, quite intentionally, scuttle the whole thing. So DoD did the only thing it could, if it wanted the deal to go through: It simply broke the law and didn’t inform congress until Bergdahl was on his way home. In a remarkable segment, Koenig plays testimony from an official who stated no negotiations were underway literally the day before he flew to Doha, Qatar to negotiate. Pretty sneaky, Secretary Hagel!

Koenig goes on to chronicle the fallout of this pretty straightforwardly illegal decision: the destruction of mutual trust between Congress and Defense, the retaliatory imposition of more stringent conditions for detainee release, a Congressional hearing in which Hagel was basically charged with keeping Bergdahl in a German hospital to avoid questioning about his possibly criminal conduct back home. (In reality, the process of decompressing and debriefing Bergdahl after years of total solitude in enemy hands simply took a long, long time unless they wanted to shatter the poor sap’s mind.) Throw in the awful PR optics and you have the recipe for a full-on partisan political battle, with real repercussions for the soldier at the center of it all.

Which brings us back to both the nonexistent investigation into deaths incurred during the search and rescue attempt and Trump’s hang-‘em-high routine. Who’s to blame for the Bergdahl debacle? The Obama Administration certainly broke the law by not informing Congress of its intentions, though as Koenig points out this is hardly unprecedented where the invocation of executive authority is concerned. And pretending there’s no evidence anyone died because of Bergdahl’s actions when the truth is no one ever bothered to try to collect any is impossible to excuse. Civilian oversight of the military is vital to a democracy, even when those civilians are Republican congresscreeps. At the same time, the Administration lied to Congress because Congress, and the entire Republican governmental, political, and media apparatus, has made it a matter of course to deny Obama anything he wants, ever, as well as maintain an hysterical level of fear-mongering about the Gitmo detainees (whose detainment, by the way, is also completely illegal, though you don’t hear HASC complaining there) and terrorism generally. Distrust met with distrust, intransigence with mendacity, illegality with illegality, until traditional political action became impossible. The result: an escalating pattern of hatred of the political enemy and a precipitous loss of faith in the existing institutions to do anything about it. Thus, a market is created: Gee, if only someone whose hatred of the enemy and contempt for the institutions could, somehow, make America great again. 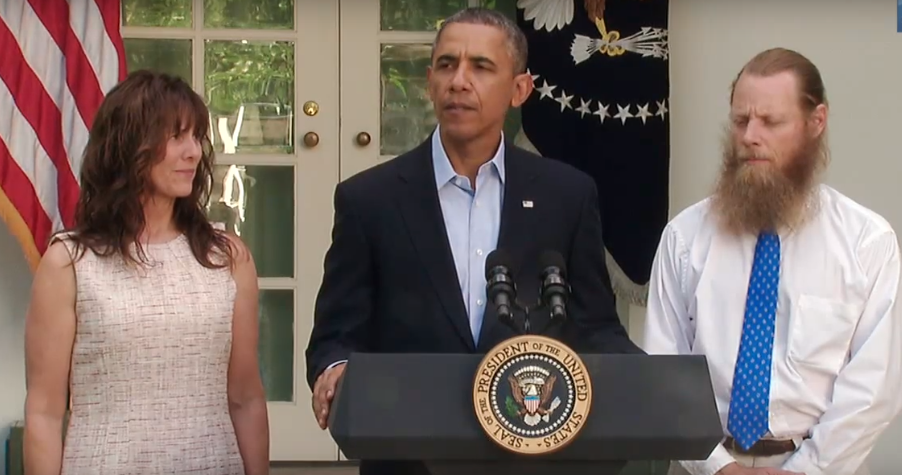