Earlier this week, I met with Pope Francis at the Vatican and raised the issue of Israel and the Jewish people.

I presented the Pope with a copy of my book, Kosher Jesus, and told the Pontiff I had written it with three objectives in mind.

The first was to highlight the Jewishness of Jesus.

The second, to educate about the Jewish origins of the Christian faith and how the only religion ever practiced by Jesus was Judaism.

And the third, to create a theological bridge of understanding between Jews and Christians in an era where Christians have emerged as some of Israel’s greatest supporters and defenders.

I then thanked Pope Francis for his courage in announcing last year that the Catholic Church would no longer be targeting Jews for conversion and acknowledged that Jews and people of other faiths can go to heaven.

This was a major step for a church that for 2,000 years has said Jesus is the only road to salvation.

I then implored the Pope to take a further courageous step and rise to the protection of the Jewish people in an age of frightening anti-Semitism.

The world needs leaders who do not close their ears as Iran incites an Israeli genocide.

“Your holiness,” I said, “the Jewish people are under threat around the world, with rising anti-Semitism especially here in Europe, and constant murderous attacks in Israel.” I then told him that as the foremost moral voice and spiritual personality in the world, his personal condemnation of anti-Semitism and hatred of Israel unconditional terms—either via a major speech or an encyclical—would be monumental. There is no difference between those who hate Israel and those who hate the Jewish people. Israel is hated simply because it’s the Jewish state.

Stating that clearly and unequivocally would provide a moral bulwark against the enemies of the Jewish people, especially as forces like BDS array to destroy Israel economically and demonize the Jewish nation.

“Iran, Hamas and Hezbollah all profess genocidal intent against Jews and Israel,” I added. I asked him to condemn the incitement in the strongest terms.

And here the Pope truly startled me.

Really? Me, pray for you? I thought it was the reverse.

But—OK. If leader of the world’s 1.3 billion Catholics asks me to pray for him I will.

I responded that the Jewish people were always praying for his welfare, wishing him God’s blessings in achieving this vital and noble aim.

The Pope is a man of immense warmth and caring, and he listened intently to my heartfelt plea to protect my people in an age where irrational hatred of Jews is growing. I will do as he asked and pray that this hatred subsides, with the Pope joining the chorus of those who condemn in absolute terms the vilification of Israel and Jewry.

It was my friend Gary Krupp of the Pave the Way Foundation who helped to arrange this papal visit for the second time, after an earlier visit with Pope Benedict at the Vatican in 2010.

Gary and I disagree on the canonization of Pius XII, who went through five years as Pope during the holocaust without even once condemning the annihilation of European Jewry. But we thoroughly agree on his other objectives to strengthen Israel and deepen the ties between the Jewish state and the Holy See.

Let us pray that this Pope—who has already inspired so many countless millions—will lead the charge.

Rabbi Shmuley Boteach, “America’s Rabbi,” is the international best-selling author of 30 books, winner of The London Times Preacher of the Year Competition, and recipient of the American Jewish Press Association’s Highest Award for Excellence in Commentary. He will shortly publish The Israel Warrior’s Handbook. 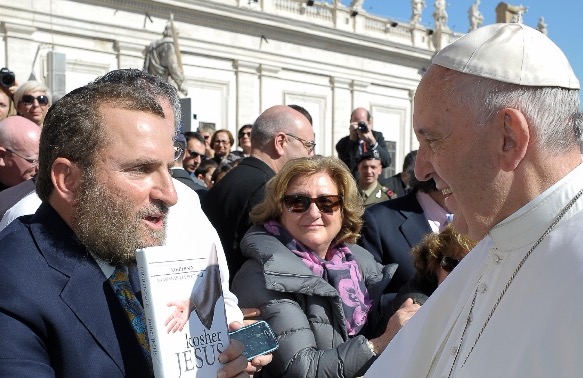