Behind the scenes throughout official Washington, Democrats can barely contain their glee about the rise of Mr. Trump. If election results in November even remotely resemble the average of all polling, not only would either leading Democrat win a powerful victory over Mr. Trump, but the margin would be so large that Democrats would almost certainly regain control of the United States Senate and make a serious run to regain control of the House of Representatives.

For Republicans, a Trump nomination would be a horror show on two levels. The GOP establishment and the conservative movement are horrified by the prospect of Republicans being led by a candidate who has long supported liberal candidates and liberal causes. The second level of GOP horror is that polls almost uniformly suggest a Trump nomination would probably result in their watching the inaugural address in January 2017 of President Sanders or another President Clinton after enduring eight years of President Obama.

While the huge lead of Mr. Sanders over Mr. Trump is the most interesting and revealing of the polling numbers, I worry about the mental health of the most emotional of the Hillary-haters. The hatred of Ms. Clinton on the GOP right is so intense, fanatical, irrational and obsessive—not to mention similar to their hatred of President Obama—that four more years of a Clinton presidency could well bring windfall profits to the mental health industries which would probably enjoy an influx of conservative patients!

I have long argued that the real political majority in America is a progressive populist majority and not a conservative or Republican majority.

The progressive proposals of Mr. Sanders have enormous popular appeal. Large numbers of students and parents like his plan for a free public education paid for by a transaction tax on Wall Street speculation. Large numbers of voters support the Sanders plans to create a single payer health care system, break up big banks, increase social security benefits, create dramatic reforms of the criminal justice system, and enact dramatic action against climate change and sweeping and historic reforms to end or dramatically cut back the influence of big money to corrupt our politics and government.

By contrast, Mr. Trump has offended one group of voters after another. His periodic insults of women he disapproves of, labelling of Hispanic immigrants as rapists and murderers, tolerance of black protestors being beaten up at his rallies, ghoulish physical impersonation of disabled people, retweeting with approval the words of Benito Mussolini, promises to be “even-handed” in the Middle East rather than express the strongest possible support for Israel, and his inability at key moments to flatly disown support from white supremacists—these positions and more make it obvious why both Mr. Sanders and Ms. Clinton would probably win huge landslides against him in a general election.

Mr. Sanders has had more influence on the policy direction of the campaign, by far, than any other candidate in either party. Ms. Clinton has been steadily moving in the progressive and populist direction championed by Mr. Sanders while the GOP candidates have been condemning, not imitating, the divisive political style of Mr. Trump.

It warms the hearts of liberals and Democrats that a shocking NBC Wall Street Journal poll finds Mr. Sanders leads Mr. Trump by 18 percent, Ms. Clinton leads him by 13 percent, and most polls confirm a substantial advantage for both Democrats over Mr. Trump.

Pundits through the media can tout the political success of the Trump brand but the numbers strongly suggest that in a general election Teflon Don would be swamped by Landslide Bernie. 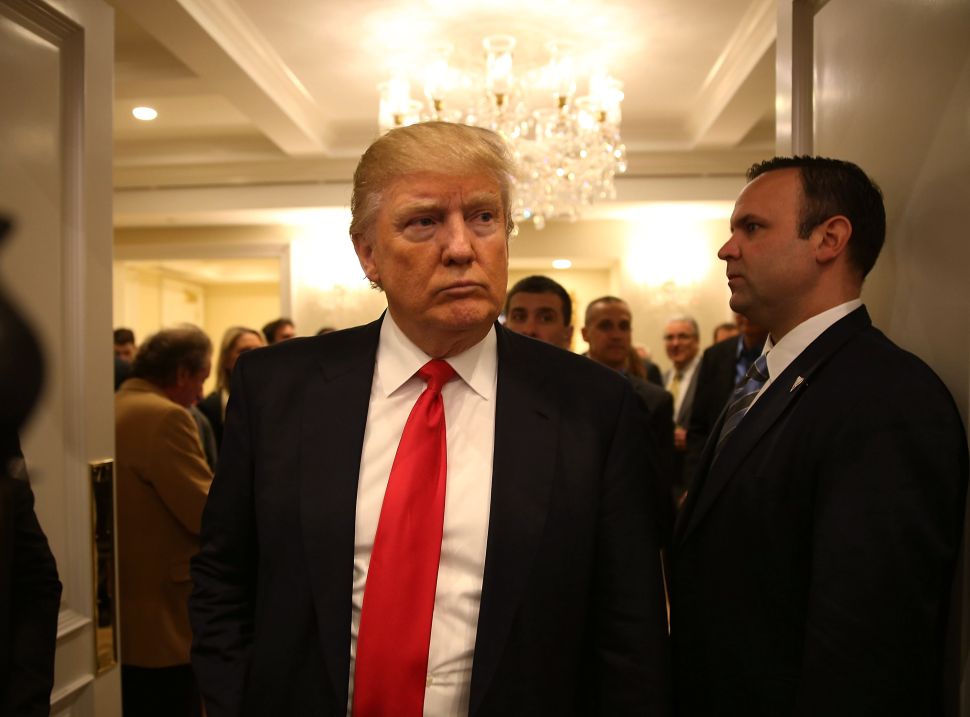