Imagine an artist armed with Picasso’s ability to jump from style to style with ease, yet who injects each artwork with the political gravitas of a Guernica. Believe it or not, that artist actually exists and happens to still be alive. He’s also probably the closest thing our country has to a “voice” of black America in Contemporary art.

That artist is David Hammons, and you need to know his work.

Why? He’s the only artist who has mastered the arcane language of 1960s Conceptualism while also fully understanding the tortured, vibrant enigma that 20th-century African-American culture can be.

Now, a survey of Mr. Hammons’ work spanning 50 years is on view at the stately Upper East Side gallery Mnuchin. The reclusive New York City-based artist gave this show his full support, so it can be considered a defining statement from the 72-year-old artist, who, also like Picasso, continues to deliver ever more beautiful, urgent and beguiling artworks as he ages.

His story begins in Springfield, Il., where he grew up the youngest of 10 children to a single mom. This retrospective of sorts—the show is not presented chronologically—begins with work from the late 1960s, when Mr. Hammons was just graduating from the Otis College of Art and Design in Los Angeles. It was both here and at a two-year stint at Chouinard (the school that would eventually become the California Institute of the Arts) that the influential art minds John Baldessari and Chris Burden would help form the then-19-year-old Mr. Hammons into an artistic force.

One of Mr. Hammons’ “body prints” from 1969, made by putting powdered pigment on top of an impression of his body in grease, clearly forecasts what this artist was going to be up to for the rest of his career. The print takes two reversed images of Mr. Hammons’ torso to create a large image of a playing card—complete with spades in the corners that make reference to the racist (and somewhat vexing) derogatory term for an African-American.

This piece, made when Mr. Hammons was just 26 years old, is a scarily efficient distillation of Mr. Baldessari’s language games (such as his riffs on art “How to” books) and Mr. Burden’s bodily investigations (such as when he was shot in the arm as an artwork, for instance). What we were yet to know was that Mr. Hammons would go on to push these explorations out in innumerable directions—via performance, sculpture, photography and other media—and always with an eye for castoff materials, wordplay and political implications as they pertain to his own body.

The art world didn’t really catch up to Mr. Hammons until the 1990s, when the ’80s art market tanked and the discussion moved away from nostalgic painting and toward less conventional forms. It was a fertile time for Mr. Hammons, with racial tension growing—and sometimes erupting—in Los Angeles and elsewhere, while, ironically, African-American athletes and stars like Michael Jordan and Michael Jackson reached a previously unseen level of icon status.

This was the era that birthed Basketball Chandelier, 1997, a basketball goal made from both high-end (glass chandelier beads) and low-end (exposed metal pipes) parts that references the disparity in potential futures for many African-American youths. There is also In the Hood, 1993, a Minimalist wall sculpture that mounts a gray “hoodie” hood from an athletic sweatshirt on the wall. The suspended hood, which looks to be violently ripped or cut away from its body like a hunting trophy, cannot help but foretell the tragic story of Trayvon Martin.

African-American style is often personified through hair. In One Stone Head, 1997, which has Mr. Hammons gluing a tight afro (complete with a razored ’90s geometric design) onto a head-sized rock that sits atop an old-fashioned hat, the artist deftly reference the African-American styles past and present—from the jazzman to the hip-hop artist—while nodding, however improbably, to the whole human history of art, from the objet trouvé exploits of Marcel Duchamp to Easter Island.

Mr. Hammons is not only talented at positioning his moving and humorous artworks in a literal sense, he’s also exceptionally savvy at positioning his art—and himself—within the art world and in the culture as a whole. Like Picasso, who crafted an unforgettable persona by aligning himself with or against other artists or institutions, Mr. Hammons fully understands his complex audience and their expectations. He always stayed a few steps ahead of them by staying acutely aware of how cultural machinations work. This much was clear when he mounted his Bliz-aard Ball Sales throughout the 1980s, performances where the artist sold snowballs on street corners with other vendors, daring to question value in art just as that decade’s art market was starting to boom.

“Doing things in the street is more powerful than art, I think,” Mr. Hammons told Kellie Jones for her book EyeMinded: Living and Writing Contemporary Art. “There’s so much of it [art] around in this town that it doesn’t mean anything. That’s why the artist has to be very careful what he shows and when he shows now. Because the people aren’t really looking at art, they’re looking at each other and each other’s clothes and each other’s haircuts.”

This is an artist that understands human nature and has never sought to escape the mean streets in favor of the ivory tower of art. But at the same time, he gets both worlds, and he plays each like a puppet for his own—and for our—amusement. 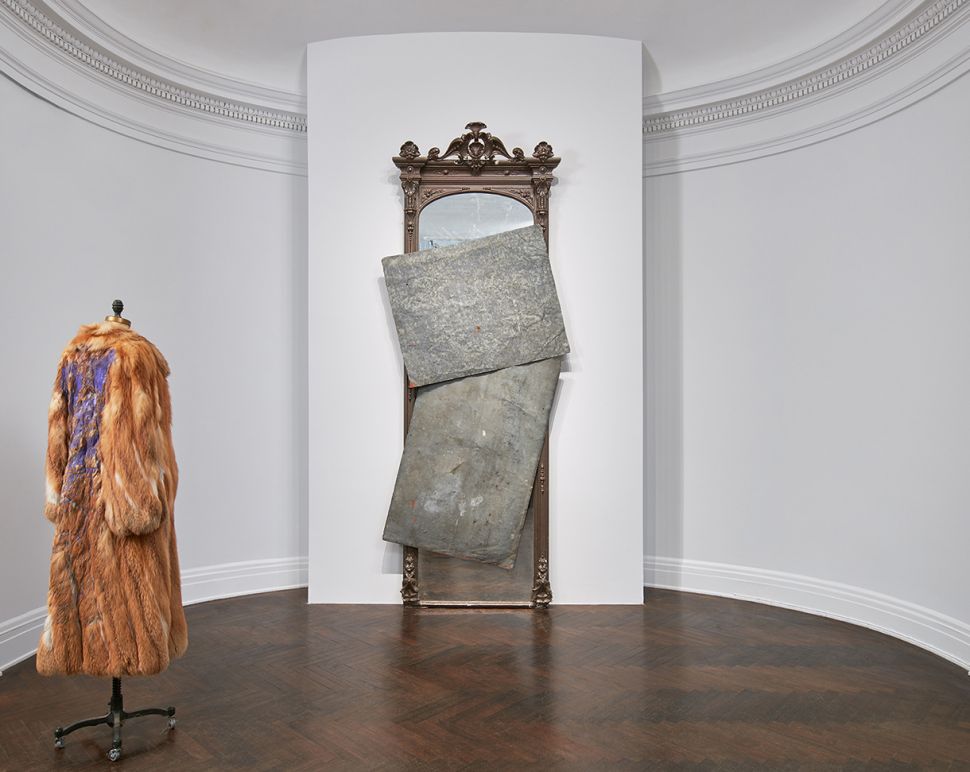