Former Newark Mayor Sharpe James is said to be interested in running for the chairmanship of the South Ward Democratic Organization, a source told PolitickerNJ.

The seat is currently occupied by Patrick Council, an ally of sitting Mayor Ras Baraka.

The City clerk’s Office told PolitickerNJ that the former mayor has not personally picked up petitions to run a slate of district leaders in June. The clerk’s office did acknowledge, however, that James might have sent a scout to pick up the petitions.

Close to the developing story, the source pointed out that Council is close to Baraka’s brother, Chief of Staff Amiri “Middy” Baraka. The former mayor wants to be more involved and does feel that “Middy” is allowing him his due influence and respect in the politically important South Ward.

The former mayor can be nerve-wracking at times, runs the buzz around South Ward political circles, but the younger generation dismisses him at its own peril, or so he would have it believe.

Indicted in 2007, former political powerhouse James did time on corruption charges. He returned to Newark in 2010 and got behind Baraka’s successful 2014 mayoral bid. His support for Baraka included the presence of his son, John Sharpe James, on Baraka’s winning ticket. But old guard/new guard dynamics quietly brewed over the course of the next two years to this point, where the older James stands poised to run a district leader slate against Baraka/Council.

Councilman John Sharpe James told PolitickerNJ that the rumor is bogus, and that his father has NO intention of running a slate, and that there is no daylight between the Barakas and the James’s.

“He’s personally running,” insisted the source, “but for him to run a whole slate – he doesn’t have the people for that.”

Any move by the mayor toward playing an amplified role could have 2017 gubernatorial implications. While none of the players has publicly backed anyone at this time, a play for more influence by the former mayor could give the old Essex power persuader a larger role in the coming gladiatorial games, which right now appears split five ways among Senate President Steve Sweeney (D-3), Jersey City Mayor Steven Fulop, former U.S. Ambassador to Germany Phil Murphy, state Senator Ray Lesniak (D-20), and Assemblyman John Wisniewski (D-19).

Fulop and Baraka are strong allies.

But it’s still volatile and the source told PolitickerNJ that while gubernatorial politics may factor in ultimately, James’s interest in the chairmanship has the makings of a decidedly local ward fight. 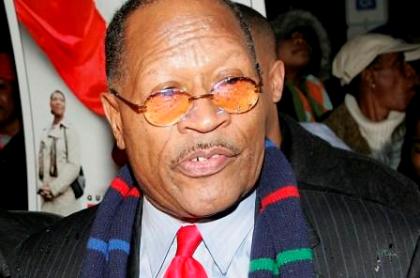