A refreshing reprieve from the usual lineup of campaign girls (we’re looking at you, Kendall, Karlie and Gigi) Stella McCartney took a different route when choosing the faces her new POP fragrance. The scent, which is billed as “a celebration of individuality, authenticity and adventure” is deserving of these four young role models. Or rather, vice versa.

The ad features Madonna’s daughter and performing arts student, Lourdes “Lola” Leon, indie pop musician Grimes, black rights activist and Hunger Games actress Amandla Stenberg and animal rights focused model, Kenya Kinski-Jones. Yes, some of these girls may have gotten a leg up from their famous parents (such as Lourdes from her mother Madonna and Ms. Kinski-Jones from her father Quincy Jones) but they are all forging a path towards a singular future, where speaking out is more important than taking selfies.

Fun and fearless! My latest POP girl @AmandlaStenberg! x Stella #POPNOW Sign up at #StellaMcCartney.com for more on POP.

Mr. Stenberg has been heralded for her outspokenness in terms of being a young, black female in today’s so-called progressive world. She may have gone viral for her YouTube video titled “Don’t Cash Crop on My Cornrows,” but even her first name has an underlying revolutionary meaning: Her mother named her after the 1989 Miles Davis album, titled “Amandla.” The actress explains on her website: “The phrase “Amandla Awethu!” was often shouted at anti-apartheid rallies in South Africa. It means “Power to the People!” She is now paving the road for female empowerment, using her role in the public eye to inspire young girls.

Meanwhile, Ms. Kinski-Jones is dedicated to Last Chance for Animals, a non-profit which aims to eradicate practices such as animal research, fur farming and vivisection. She’s also a vegetarian, which closely aligns with Ms. McCartney’s animal-free brand ethos. The 23-year-old has also already fronted a Calvin Klein Jeans campaign and appeared in the pages of Vogue, so expect to see much more from this budding multi-hyphenate.

Grimes needs little introduction, as the 27-year-old Canadian chanteuse is a favorite of the fashion set, as well as basically every other set. While she’s currently on tour with Florence and the Machine, dressed entirely in costumes designed by Ms. McCartney, Grimes is equally a pop star and an artist. Not to mention she’s one of the few female producers in the music biz. In a recent interview accompanying her Teen Vogue cover, she touched upon feminist issues (including her right to choose what to do with her body hair) and how she became a successful, self-taught musician.

So happy to have Lola on the POP team! Lola, who I’ve known her entire life, is at the beginning of her career as a performing artist. She’s an independent, inspirational and free-spirited young woman. Despite being born in the spotlight, she has kept her feet firmly on the ground! X Stella #POPNOW #LolaLeon

Finally, there’s Ms. Leon, who has received most of the publicity surrounding the POP perfume. This is the first major modeling job for the 19-year-old University of Michigan student, but Ms. McCartney pointed out that she’s much more than just her famous genes. On Instagram, the designer wrote: “So happy to have Lola on the POP team! Lola, who I’ve known her entire life, is at the beginning of her career as a performing artist. She’s an independent, inspirational and free-spirited young woman. Despite being born in the spotlight, she has kept her feet firmly on the ground!”

While the fragrance won’t drop until this summer at Sephora and on Sephora.com, with its tuberose and sandalwood notes, it’s well worth the wait. And not just because of the team of girls who are representing it. Ms. McCartney used the sustainable process of bio-mimicry to reduce the amount of flowers used in the formula, protecting the endangered sandalwood tree, while still producing a vibrant fragrance. Basically, POP is inspiring from all angles. 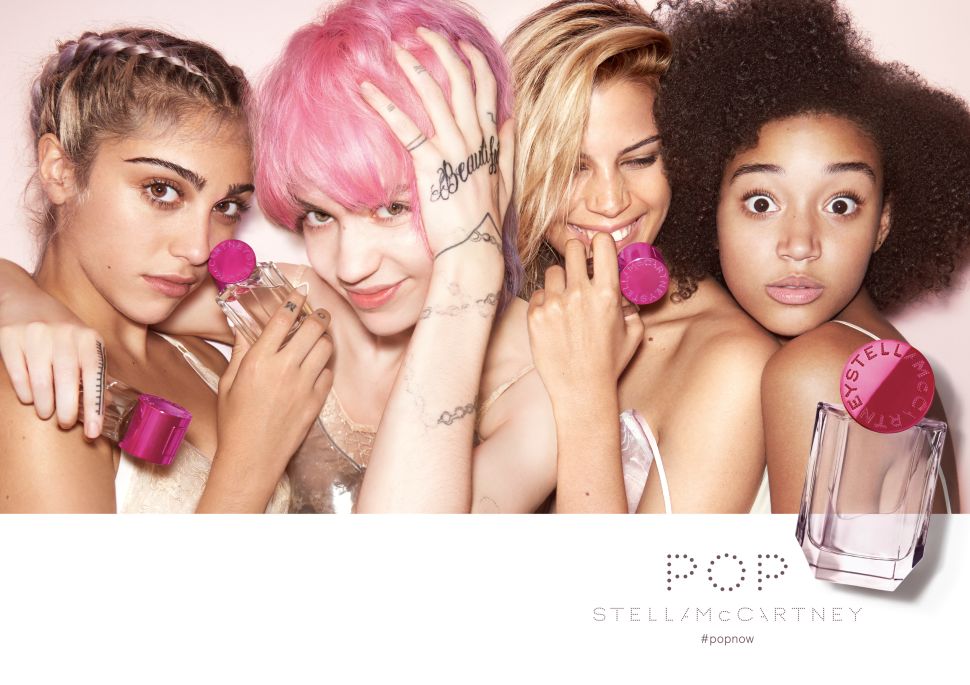