“It’s a shame that it’s snowing,” Core broker Jim St. Andre lamented as we rode the elevator up to the 28th floor of 101 Warren Street. “It’s such a nice view.”

While we found that the snow created a rather lovely cityscape, Mr. St. Andre needn’t worry—the precipitation had all but disappeared an hour later.

“People that walk in here ask if it’s staged—in a good way!” Mr. St. Andre claimed as we stepped into the foyer of the 3,800-square-foot abode, listed for $10.5 million. We did find the living room, with its tufted sofa and tree trunk-style coffee table, to be a tad sparse, but perhaps it was just going with the industrial vibe that seems to be de rigueur for a Tribeca loft.

On the other side of the living room is a separate den, with one side mysteriously covered by drapery spanning the entire length of the wall.

“There’s nothing behind it, there’s no secret room,” Mr. St. Andre admitted, flinging open the curtain to reveal a rather plain wall with a door that opens back to the foyer.

The master suite is “all custom,” Mr. St. Andre told us. “I don’t usually have photographers do the bathrooms or showers, but I think this one qualifies,” he explained of the massive shower. Built-in closets separate the bedroom from the office, which was made up of a glass desk and animal print chair in front of floor-to-ceiling windows, with assorted designer handbags adorning a miniature bookshelf.

A media room with a second kitchen and access to a covered terrace marks the “kids wing,” Mr. St. Andre said, which was made up of two nearly identical side-by-side blue bedrooms, one of which had direct access to the terrace.

“This is one of the very few two-unit combinations in the building—it sprawls like a suburban home,” Mr. St. Andre opined, just as we spotted two identical hoverboards placed in front of the doorway. “It’s in a way where you can really have peacefulness horizontally.” As long as the hoverboards aren’t used indoors. 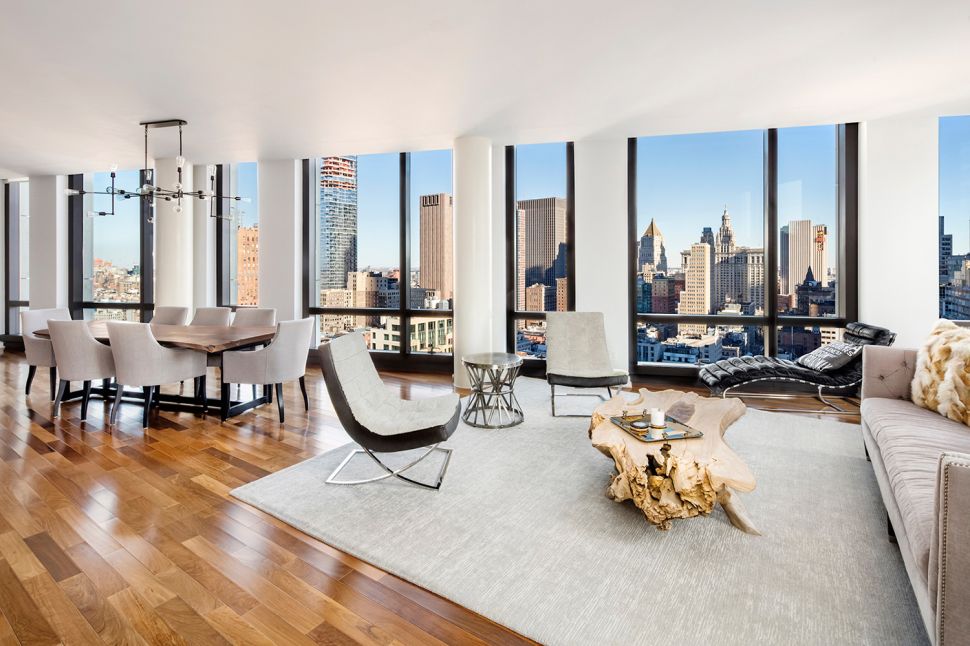