My impatience waiting for him to come up with a movie of any life, substance or emotion has worn me out. With the corpse of a nightmare called Knight of Cups, I have finally given up on Terrence Malick. This dog of a film is as riveting and fascinating as a walk-in bathtub.

Once upon a time, as a fledgling director from Illinois, Mr. Malick was a cause for rejoicing. Badlands (1973), a poetic killing spree by a lost girl and a greaser boyfriend in the Dakotas, and Days of Heaven (1978), a rhapsodic mood piece about a love triangle set in the wheat fields of the Midwest at the turn of the century, opened new windows for jaded moviegoers. It was downhill from there. A once fresh and gifted visionary who still knew how to tell a story came dislodged and turned out self-indulgent meanderings about his own visions of birth, death and dinosaurs. All that is left of Terrence Malick is an ability to assemble casts of A-list names and turn them all into zombies.

He passes himself off as a purist, untouched by crass Hollywood commercialism. But in truth, his work is just the opposite—while it has no commercial value, yet it is still shallow, gimmicky, undisciplined and manipulative. Knight of Cups is all of that—a conflagration of pretentious images and camera tricks that follow a disillusioned writer (Christian Bale, giving the deadliest performance of his life) through the toxic wastes of Hollywood and Las Vegas seeking the meaning of success. “All those years—living the life of someone I didn’t even know,” he whines in one of the film’s profusive voice-overs. Wafting across the Nevada desert at dusk like Sean Penn in the abominable Tree of Life, Mr. Bale looks blank as a cardboard UPS box. Inconclusive with knuckleheaded indecision like Ben Affleck in the paralyzing tedium of To the Wonder, he loses the audience through the looking glass before you can open your popcorn bag and mutter “Come back, Alice, all is forgiven.”

Kids swing. Cars skid across the endless freeways. A helicopter hovers over what passes for a skyscraper in downtown L.A. The camera peers into an aquarium, focused on schools of fish trapped in a tank. The rare moments when actual words are spoken are wrapped in dopey narration: “How do I begin?” “Which way should I go?” “Where should I meet you?” All questions Mr. Malick seems to be asking of himself. No answers materialize at any time in the 118 minutes of playing time that seem like 118 days at hard labor.

The film is divided into short subjections uninvolved with the narrative, illustrated by tarot cards. Apparently the Knight of Cups is one of them, which explains nothing about the title of the movie except the title itself. Other similarly inconsequential subheadings include: The Moon, The Hanged Man, The Hermit, Judgement, The Tower and The High Priestess. None of them make any more sense than the parade of stars who curl around the periphery like smoke rings. After a lot of inarticulate gibberish about a pearl, a cup and a prince who can’t awaken from a deep sleep, Mr. Bale’s beach condo is hit by a hurricane.

His father (Brian Dennehy) wanders through an empty room and washes his hands in a basin of blood. His brother (Wes Bentley) occasionally appears, acting mentally challenged. And a parade of beautiful women encircle Mr. Malick’s alter ego like the vampire wives of Count Dracula. Cate Blanchett is an old discarded love who walks barefoot on the beach, saying nothing. Natalie Portman is a married woman he may or may not have gotten pregnant. She is a worthless ingredient in this poisonous farrago of loss, pain and indifference, but at least she’s photographed in the beauty of the Huntington Library, Museum and Botanical Gardens in San Marino, Calif. Imogen Poots tags along briefly, wearing a pink wig, and Teresa Palmer plays a Vegas stripper. Freida Pinto is a bohemian model who leans against the furniture looking sick, like a Calvin Klein ad. What a waste of lipstick.

The point of Knight of Cups, if there is one, is to show the bleak dead-end emptiness of life in Los Angeles, which isn’t hard to do—and has been done much better elsewhere. (For a vastly more memorable and corrosive view of Hollywood, see Frank Perry’s underrated film adaptation of Joan Didion’s Play it As it Lays.) The loopiness of all this twaddle makes you want to scream. You could cut an entire hour out of it and nobody would know the difference. At a decadent party around a Hollywood swimming pool where nobody seems to know anybody else, Antonio Banderas and Ryan O’Neal appear as themselves in unbilled cameos. All of the people who don’t know each other jump into the swimming pool with their clothes on. At least Quentin Tarantino would have shown us some skin.

As the malaise sets in, you forget that these actors ever had any talent whatsoever. It’s easy to forget about Terrence Malick, too. Having lost all interest in his audience, he has launched a new career of excess based on surreal boredom, deliberately eschewing all concessions to logic, character motivation and linear narrative. There’s nothing to detain you here. Mr. Bale’s character is described as a “comedy writer,” but he’s as sterile and humorless as the Hollywood austerity that surrounds him. His own movie star charisma has been drained dry as a cactus in Death Valley, and as far as the immoral ennui of the film industry that he says is destroying him, there’s not a shred of profound insight in Knight of Cups within 100 miles of the Santa Monica Freeway. 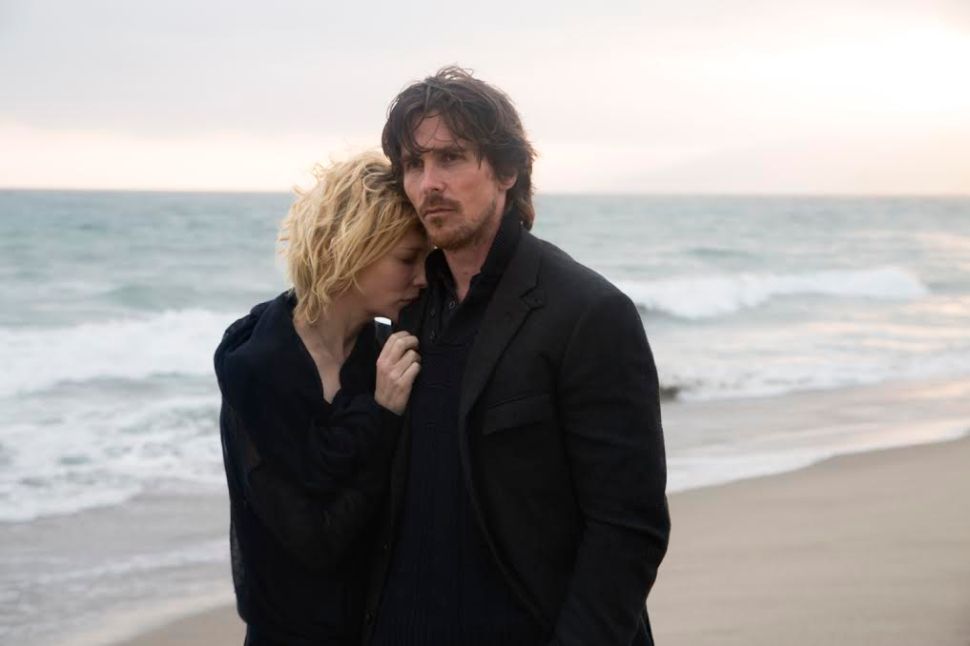