There was a time not so long ago when a TV series debuting at a time other than the fall season, particularly after the first of the following year, was called a ‘mid-season replacement.’ This type of series was considered (mostly by its own network) as an entity not quite strong enough to hold its own during the competitive fall season and only ready to air should another show stumble and fail. These series were akin to something like a second-tier offering.

With shows now debuting year round, those days are over. There is no use of the words ‘mid-season’ or ‘replacement.’

And, if you’re Shonda Rhimes you can debut a show whenever you want. Your network is just so happy to have anything with your name (even mildly) associated with it that you could debut anything at absolutely any time.

So The Shondaland Camp presents its latest Thursday night entre –The Catch.

As described by Executive Producer and Showrunner, Allan Heinberg, a veteran Shondaland team member, The Catch is, “A fun romantic caper about the best private investigator in Los Angeles who falls in love with a sophisticated con man who’s about to take her for everything she’s worth.”

Starring Mireille Enos (The Killing) as P.I. Alice Vaughn and Peter Krause (Parenthood) as Ben Jones, her almost-husband turned elusive con man, the two are entangled in a game of cat and mouse that begins mere minutes into the pilot.

Comparing the series to other Shonda series, Heinberg says, “There are a few elements that make this show like her others — it’s a fusion of a procedural drama and a relationship drama, it’s got a strong female protagonist and strong female friendships, and two people who are meant to be together, but it’s impossible for them to be together.”

Enos adds, “And Shonda is all about empowering women in her shows. She has a rule book for her shows with things like ‘women are not saved by men’ so we continue to make sure to stick to those rules.”

While there are those similarities, Heinberg discloses what makes The Catch different from other Shonda shows is, “Well, my voice is a bit different from Shonda’s and Pete Nowalk’s (who created How to Get Away With Murder) and that shows in the dialogue. And, the pace and tone of this show are different from the others series as well.”

Enos says that one of the other things that makes The Catch unique is its structure. “We’re working on three timelines throughout the season – there’s the love story part that goes from the beginning all the way to the end, then you have Ben’s cons, which last two to three episodes, and the investigators have their case of the week as well, so there’s a lot going on.”

Hinting at those weekly cases, Enos says, “The team investigates everything from a pharmaceutical case to an affair to military contracts to murder.”

Heinberg promises some kick-ass action as well, explaining, “We found out that Mireille has a black belt in karate and when you’re lead actress does that in her real life, you have to use it.”

For all its glamour, Heinberg feels that it’s the universal themes that will attract viewers to this story. “This echoes every relationship and asks ‘how well do you know the people in your life, the people that you love? What are they keeping from you?’ These questions reverberate not just in your romantic relationships, but also in your friendships and family life. I think we’re inviting people on a ride they can relate to. At the heart of this, it’s just a man and woman in love and trying to be together. It’s a heightened story, but still a love story.”

Heinberg also reiterates that while The Catch comes from the prolific producer of Grey’s Anatomy, Scandal, and How to Get Away With Murder, and it airs on ‘Shonda night (Thursday),’ “While we fit right in with those shows, but we’re our own thing. So, people who love those shows will feel at home with us but they won’t feel like they’re seeing something they’ve seen a hundred times before.”

The Catch airs on Thursdays at 10/9c on ABC. 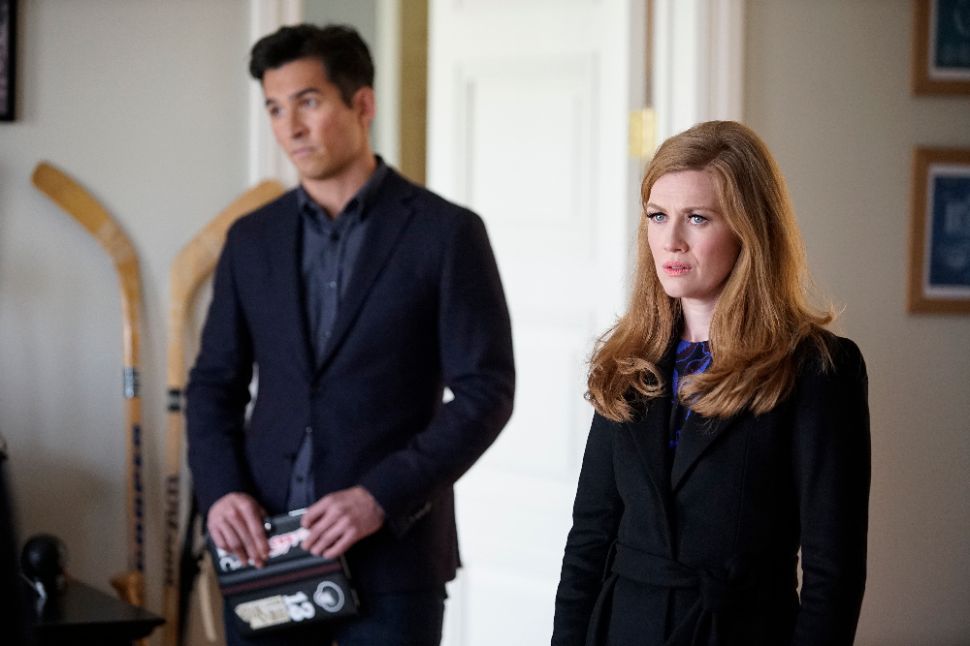