Prepare to be devastated. The new Broadway revival of Blackbird, the anguished and harrowing play by David Harrower that won London’s Olivier award in 2005 before opening to astonished and astounding reviews in its initial New York production two years later, is again ablaze with power at the Belasco Theater. Suffice it to say that in 80 mesmerizing minutes with no intermission, you will not see a darker, more polished, better directed or brilliantly acted play this year. It will knock you right out of your sensible shoes.

Jeff Daniels recreates the career-defining role he created in 2007—a tortured man named Ray, paunchy from years of nutritious neglect, unable to stand erect with pride or purpose, haunted by a sordid event from his past he has tried to put behind him without success. Ray, a beaten man in his mid-50s who has seen better days, has spent time in prison for pedophilia, which he insists was a mistaken debt for a love affair with a 12-year-old girl named Una whom he seduced when he was in his 40s. Rehabilitated and trying to survive, he now works in a dreary office building at a job he has no passion for. In fact, he hasn’t had much passion for anything since Una. Theirs, we soon learn, was not a case of sexual abuse but a full-fledged love affair oblivious to the social parameters of social acceptance and the law.

When Blackbird opens, Ray is forcefully dragging a woman by her tightly clenched arms into the cluttered snack bar and makeshift locker room of his antiseptic office building (a characterless set meticulously designed in the cold and sterile color of a filing cabinet by Scott Pask). This is Una, played with electrifying intensity by Michelle Williams. The first word she utters, mockingly but tremulous with anxiety and nervous tension, is “Shocked?” That’s putting it mildly. He hasn’t seen her for 15 years, but in the course of their feverish meeting he learns that the pain, ardor, tempestuousness and intoxication of the affair he struggled to forget is still very fertile and fluid. It’s shocking, all right, and throughout the play, the audience gasps.

He tries to throw her out—until he learns that his arrest, trial and imprisonment were nothing compared to the agony she has endured. He deserted her out of guilt, and she’s traced him through a magazine ad, determined to get even. He’s red-faced with indignation and panting with fear for what could happen next. For years, she wrote him letters filled with love and rage but never mailed them. Names have been changed. He’s been in a healthier relationship for seven years with an older woman, but he’s still plagued by memories that have never been resolved or blurred. She considers him the man who ruined her life psychologically and still bears the scars. But although society called it by an ugly criminal name, it wasn’t really pedophilia. What makes Blackbird controversial is the admission by both parties that what they had, and cannot redeem, was a full-out affair. They had codes to bypass her parents’ detection, they went away together to sensuous encounters in motel rooms, they were committed and incapable of logic—until he abandoned her like a coward in a roadside inn. Together again, they contemplate throwing caution aside, until history repeats itself in an ending so tragic it has to be seen to be described.

The title has no meaning beyond the author’s admission that while he was writing it he was listening to a jazz recording of “Bye Bye Blackbird” that influenced his mood swings. Never mind. Blackbird is a dazzling piece of writing—spare and brutal and frank, illumined by a pair of honest and penetrating performances that leave you drained. Cleanly and economically directed by Joe Mantello in a manner that utilizes every shadow of the play’s claustrophobic space, Blackbird is so purely concentrated that you cannot be bored or distracted for a New York microsecond.

This is as good as it gets, and the actors know it. Sturdy, restrained, racked with conflict, Jeff Daniels is perfect. But the experience is a titanic triumph for the elegant, sensual Michelle Williams. I didn’t think she could surpass her captivating, three-dimensional and heartbreaking performance as Marilyn Monroe in the unforgettable My Week with Marilyn, but as much as I have been captivated by her in everything she’s done, I was unprepared for her power and tenderness here. Acting with her mouth, her tears and legs that tremble with fervor, her body language reminded me of Julie Harris in I Am a Camera. In a fit of tension-relieving fury, she empties the garbage can and strews the contents all over the stage in a burst of fire more carnal and erotic than words. She should have won an Oscar for My Week with Marilyn, and she deserves a Tony for Blackbird. 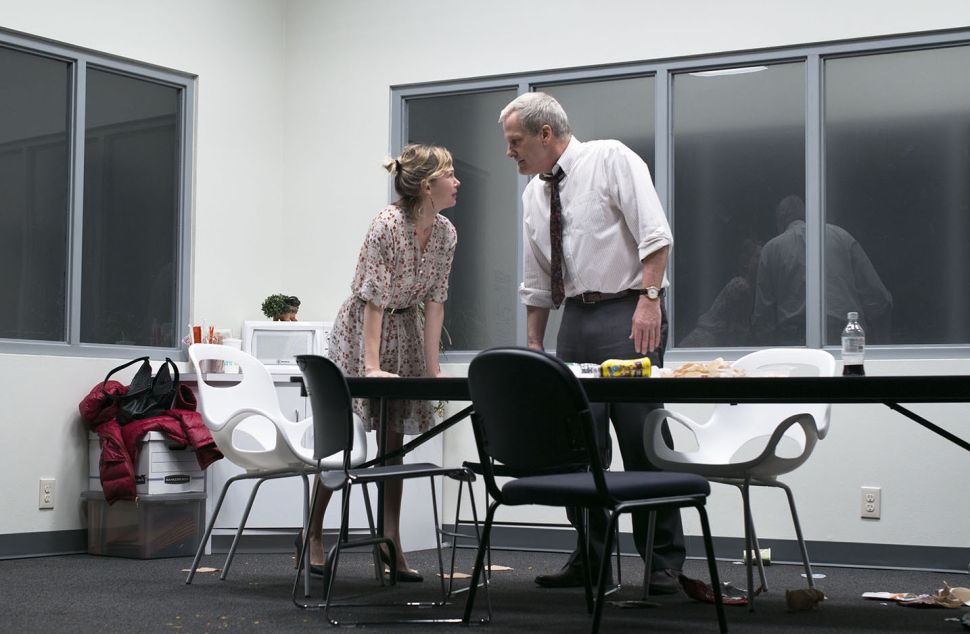