The GOP panic around Donald Trump has risen to new levels, following Mr. Trump’s strong Super Tuesday showing. Stern speeches by GOP establishment figures like Paul Ryan and Mitt Romney may warm the hearts of GOP leadership, but without a concrete plan they will do little to stop the controversial mogul’s march to the nomination. Crafting a plan is not easy due to the divided Republican field, the mood of the Republican electorate, the structure of GOP primaries and, not to be overlooked, the enduring, if perhaps surprising, popularity of Mr. Trump. Nonetheless, it is possible to explore what mechanically would have to happen for Mr. Trump to be denied the nomination.

Two issues, however, must be considered regarding the feasibility of any such plan. First, while we have heard the term “Republican establishment” from pundits since this campaign started, there is, in real terms, no such thing. The Republican establishment can be defined as a group of individuals and institutions that support the GOP, are generally most concerned with Republican foreign policy and economics, and have strong ties to the higher levels of American government and industry, but there is no steering committee or group of ten people in a room in Washington or Greenwich, Connecticut making decision on behalf of this establishment. Similarly, for years now the Republicans are simply a collection of the voters, local and state organizations, conservative interest groups and the like. The same is true of the Democrats, but, of course, with different interest groups and organizations. Thus, any sentence that begins with “The Republicans should” must be heavily discounted.

Second, while Republican opposition to Mr. Trump is clearly strong, three different strains of opposition to Trump have emerged. The first is that many Republicans believe he would be a weak general election candidate, making it easy for Hillary Clinton, or possibly Bernie Sanders, to win the general election. The second is that many Republicans claim to be concerned about Mr. Trump’s racial insensitivity, specifically his less than immediate and unequivocal condemnation of David Duke. Third, many Republicans believe that Mr. Trump is insufficiently conservative to represent the GOP.

These three reasons represent very different sentiments. Additionally, while they all have elements of truth to them, they are also all somewhat problematic. First, if the biggest concern about Mr. Trump is his electability, that is not an issue over which it is worth tearing the party apart. Clearly, at least on paper, Marco Rubio or John Kasich would be better general election candidates, but going to dramatic extremes to stop a very successful primary candidate simply because some feel he is not the most electable would damage the party a great deal, and could lead to the nomination of Ted Cruz, who also might end up winning a limited number of electoral votes against Hillary Clinton.

Concerns about Mr. Trump’s reaction to being endorsed by David Duke, his strong anti-Muslim rhetoric and his approach to immigrants that many find prejudiced towards Latinos appears to be more principled, but also should be examined more closely. While many Republicans who raise these concerns have a real opposition to racism, it remains true that view has not always been consistently applied within a party, that has long been accused of exploiting white racist sentiment and whose majority whip in the House of Representatives has described himself as “David Duke without the baggage.”

Liberals who are observing Mr. Trump’s campaign may be surprised to learn that many Republicans find him insufficiently conservative, but his positions on issues like the Iraq War, healthcare and Planned Parenthood strike hardline conservatives as inconsistent or, in the case of Iraq, simply in contrast to orthodox Republican views. Ironically, it is these very positions that might allow Mr. Trump to expand the Republican electorate and do better than expected in a general election.

The internal confusion, perhaps even contradictions, driving the Stop Trump movement are mild compared to the complex logistics needed to actually stop Trump from winning the Republican nomination. Mr. Trump could be prevented from winning the nomination if another candidate somehow manages to win a majority of delegates, or, in a more likely scenario, if Mr. Trump is denied a majority of delegates needed to win the nomination forcing a brokered convention.

To win the nomination, any candidate will need 1,237 out of 2,472 delegates. Currently, Mr. Trump has 319, or about 26 percent of the delegates needed. Ted Cruz is second with 226 followed by Marco Rubio with 110. Significantly, Mr. Trump has not received 50 percent of the delegates thus far, so at this pace, is not on track to win the nomination outright. To win the nomination, Mr. Trump would need to win roughly 51% of the 1,792 delegates remaining. That will not be easy, but is certainly possible—particularly if he picks up a few winner-take-all states like Florida and Ohio or if other candidates fail to qualify for delegates in some large states. Mr. Cruz, who has the second most delegates thus far would need fully 56 percent of the remaining delegates. That is also not impossible, but difficult to imagine for a candidate who currently lags far behind Mr. Trump in all national polls. Additionally, Mr. Cruz is hardly a favorite of the GOP leadership, so they will be very reluctant to rally around him, even as an alternative to Mr. Trump.

A brokered convention may be the most plausible way to stop Mr. Trump, but that will not be easy either. it will require the remaining candidates coordinating their efforts in a way that given, the campaign so far, seems unlikely. The first test of this approach will be March 15th when both Ohio and Florida hold primaries. If favorite sons Marco Rubio and John Kasich can win those primaries, with the support of anti-Trump Superpacs, a combined 165 delegates will be denied Mr. Trump. If a week later, one of the candidates, most likely Ted Cruz, can win Arizona (another winner-take-all state), that number will increase to 223. It is unlikely, but certainly possible, that Mr. Trump could lose all three of those winner-take-all states. If that happens, Mr. Trump would face the substantial challenge of winning 58 percent of remaining delegates. Thus, the best way to force a brokered convention is not to clear the field for a candidate to go one on one with Mr. Trump, not least because that candidate would very likely lose to Mr. Trump. Instead, the remaining candidates, and the GOP anti-Trump leaders need to do the hard work of creating a tactically sophisticated and coordinated approach to stopping Mr. Trump from getting the required 1,237 delegates.

A brokered convention, while difficult to achieve, would bring about its own set of problems, including potential confusion about the rules that would govern that process. Additionally, even if Mr. Trump does not do as well for the rest of the primary season, he will have a substantial amount of delegates, probably no less than 40 percent, at the convention. Those delegates will be very reluctant to vote for an establishment figure like Paul Ryan, who is frequently mentioned as the candidate most likely to emerge from a brokered convention. If, however, somebody like Mr. Ryan is nominated without those Trump delegates, Mr. Trump can make a good argument for leaving the party and running as an independent, likely guaranteeing a Democratic victory in November. Mr. Trump’s leverage over a brokered convention should not be underestimated.

Ultimately, the Stop Trump campaign will either fail or likely damage the party. Republicans must now assess their motivations and decide whether or not is worth what would inevitably be a very high risk gambit. 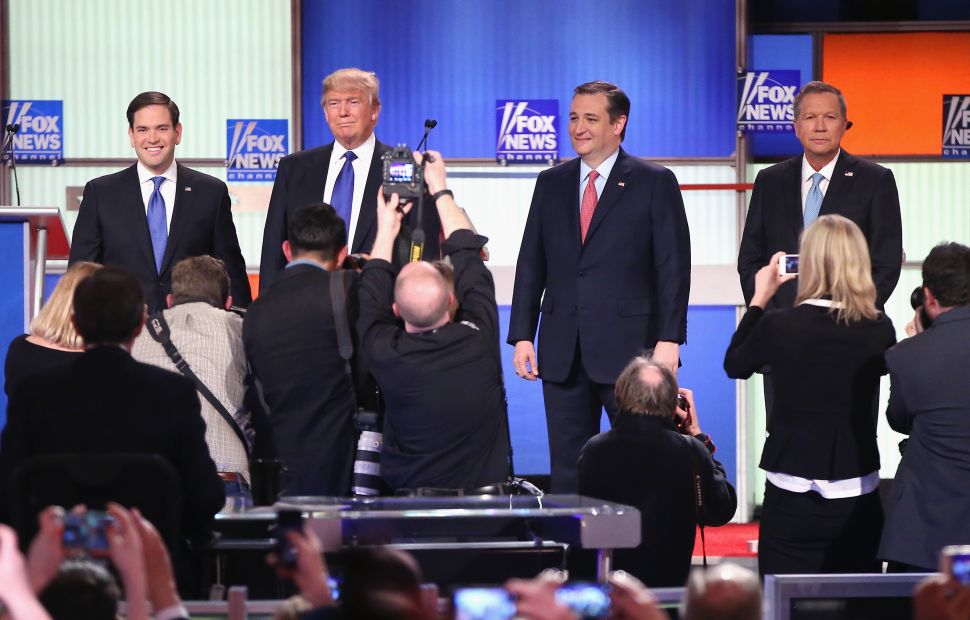