Mourn the loss of the Chelsea’s Dia building no longer, the Independent art fair has found an even more gorgeous space for its annual event, if such a thing were possible, at Spring Studios in Tribeca. Dare we say it: the new location is even better than the last, and creative booth design from participating galleries makes it an ideal space for viewing art during the New York art world’s biggest week. For a trade fair, Independent has undoubtedly traded up.

The fair is spread over four floors at 50 Varick Street: the ground floor, five, six and seven with a mezzanine that provides a jaw-dropping view in the late afternoon of the Manhattan skyline. We advise visitors to start at the top and work their way down.

On the seventh floor, New York gallery and bookstore Karma is presenting a series of bright and colorful minimalist paintings by Marina Adams alongside stuffed chairs by designer Katie Stout. Ms. Adams’ 17-part, 10-foot-tall wall installation of works on paper titled Large Dream is made dynamic by the streaming light that pours in from the skylight above, and is an aesthetic “match made in Heaven” with Ms. Stout’s chairs, which are covered in thick clear plastic and stuffed with cloth, colored metallic paper and fur—surprisingly comfy.

Also on seven, London’s Herald St gallery brought a series of architecture-inspired sculptures and watercolors by Argentinian-born artist Pablo Bronstein. His small ink and watercolor works on paper, all titled Two-story, two room pavilion in the Oriental Taste fuse historic architectural styles with clashing colors and ornate flourishes to create spaces that would otherwise be impossible to construct in real world.

A cascading metal staircase connects the mezzanine to the sixth floor, where gallery booths are separated by two-foot thick X-shaped walls. Thicker than your typical art fair drywall dividers, the walls provide a firm separation between each booth, and a give the floor layout a sophisticated feel.

Standouts on six include Gavin Brown’s Enterprise, with an eye-catching collection of works by Karl Holmqvist. The installation features black-and-white text paintings and wall paper, standing white neon sculptures, and a pile of clothing spread across the floor that viewers can walk across though few do.

Nearby, Independent co-founder and dealer Elizabeth Dee is showing a series of red and green paintings by Philippe Decrauzat. The small works are only slightly different from one to the next; a shadow painted on each canvas’ right side creeps across the composition, covering the color on some almost entirely and only faintly on others. Ms. Dee’s booth also sits on an elevated platform accessible by stairs on two sides, creating the feel of an isolated room within fair. It’s quiet and meditative, and in the center of the line of paintings is a canvas-sized window cut out in the booth wall that lets in the city view.

Also on six are bronze and plaster sculptures by California artist Evan Holloway at Los Angeles’ David Kordansky Gallery. Mr. Holloway takes delicate natural forms, such as tree branches, and creates winding and angular geometric shapes by casting the branches in bronze and painting them in rainbow color combinations. The seemingly delicate works are priced around $24,000 each, and shown alongside a life-size replica of a house plant and fluorescent light rendered in clunkier, low-fi materials like cardboard and CelluClay, selling for $55,000.

“The new space is great for showing sculpture,” gallery director Kurt Mueller told the Observer. “We loved the old Dia building, but at some point it just sort of felt like we were having to cram stuff in there—it got crowded.”

David Kordansky is one of the few with a corner spot, and a solid wall of floor-to-ceiling windows. “People have just been coming to our corner and standing in the light, taking it all in,” he said.

Larger versions of the sculptures on view are currently on view in Mr. Holloway’s exhibition at the gallery through March 26.

The fifth floor boasted eclectic finds from Thomas Erben, who brought a bright green double-sided painting by Dona Nelson, priced at $48,000. Venus Over Manhattan arguably had the brightest colored booth, with neon paintings and drawings by Pop artist Peter Saul.

A dealer from Thomas Erben also spoke highly of the new space, saying “This feels more official, like a fair. At Dia, people would get confused between what [artwork] was ours and what was being shown by another gallery.”

The ground floor is reserved for six newcomers to the fair. Among them, was our favorite work of the bunch: a knockout painting by Mark Greenwold at Garth Greenan‘s booth. The gallery is also exhibition at The Armory Show, but at Independent they’ve chosen to show single large-scale early painting from 1971-75 titled Bright Promise (for Simon). While Mr. Greenwold’s imagery is painted, it more closely resembles collage since elements in the painting are all taken piecemeal from magazines and found images. The background elements in Bright Promise were taken from design magazines, and the nude figures from pornography—though the latter element isn’t typical of his other work according to a representative from the gallery. The painting, she told us, Mr. Greewold considers his masterpiece, and is sadly not for sale. However, an exhibition of newer works is currently on at the gallery through March 26, and everything there is up for grabs. 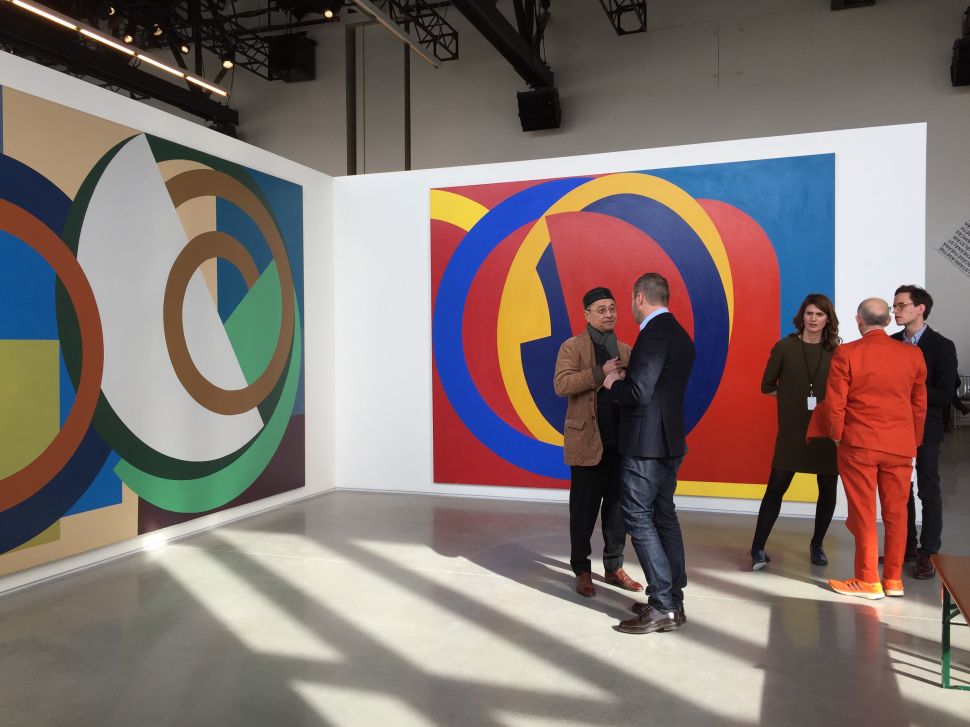