The mythology of truthtelling in American politics may have begun with the hagiography of the Father of Our Country, who “could not tell a lie” about chopping down the family cherry tree, but George Washington would be weeping around a bonfire of burning pants over the untruthful rhetoric and incivility engendered by an apparently acceptable approach that’s infected the 2016 presidential campaign.

Unencumbered by euphemistic language of yesteryear, the straight-ahead charge of “liar” has been so readily employed as a flaming shuttlecock between rivals, both within the same party and across the aisle, that political pundit James Moore, the co-author of Bush’s Brain, hears the charges as an essential element to what he’s termed “lying-as-a-tactic” in this year’s presidential contest.

Anyone who witnessed the recent cage match better known as the Republican debate, prior to the South Carolina primary, heard just such a barrage of name-calling, which Mr. Moore characterized as “three children arguing over the playground monkey bars.” And indeed, shouts of “You’re a liar” rang out, often simultaneously, between Ted Cruz, Marco Rubio and Donald Trump.

Partisanship in our current Congress has already polarized the parties, so that there are few real “friends across the aisle.” What happens when you add inflammatory language to the mix?

I’ve never seen anything like it in my entire life,” says Professor R.B. Bernstein, who teaches political science at the City College of New York. “I felt bad for the moderator, who lost control of the proceedings, because it just hadn’t happened this way before. In the past it fell to a candidate to document a lie, or it was expressed euphemistically. Remember when Nixon was called “Tricky Dick,” and ads asked “Would you buy a used car from this man?” Or when Ronald Reagan stood at the podium with Jimmy Carter and said, “Well, there you go again?” What was he saying but “You’re lying again!” It was a skillful and potent claim of someone not telling the truth. He appeared serene, confident in his own integrity while he transformed Carter from truth teller to a liar in just five words.

George W. Bush, added Mr. Bernstein, seized upon John Kerry’s unfortunate statement that he was “for the Iraq War before I was against it” and turned it into ‘flip-flopping,’ a thinly veiled charge of “liar” without invoking the actual word.”

Incivility took a quantum leap when Rep. Joe Wilson shouted out “You lie!” during President Barack Obama’s 2009 State of the Union address in front of the joint houses of Congress, which set a precedent by breaking an unwritten rule of comportment that had never been broken before in American history, not since the first year following the American Revolution. It’s a matter of etiquette that derives from British Parliament, where such language is strictly forbidden and subjects offending MPs to the serious charge of contempt of Parliament. (Rep. Wilson was rebuked by a partisan vote in the House that fell short of official censure.)

By last July, first-term Sen. Ted Cruz took the erosion of historical decorum further when he called his own majority leader, Mitch McConnell, a liar on the Senate floor. This is what happens, asserted Mr. Bernstein, when “political amateurs” become part of the election process, and people no longer understand, or agree on, the rules governing their behavior. Thus we have Mr. Trump referring to Sen. Cruz as “Lying Ted” in the most recent candidates’ debate.

This leads us to wonder: How does the shredding of courtliness between the candidates trickle down in the election process? Partisanship in our current Congress has already polarized the parties, so that there are few real “friends across the aisle.” What happens when you add inflammatory language to the mix? For an answer to this we turn to two sources: Renaissance statesman and philosopher Michel de Montaigne, and the Broadway hit musical Hamilton.

Montaigne, who himself had been Mayor of Bordeaux and a member of the French Parlement for 13 years, considered lying the worst of crimes because he valued a person’s word so greatly as the cement that held society together. “He wanders from the truth who thinks that government more absolute and durable which is acquired by force than that which is attached to friendship,” he wrote. Such friendship led to compromise and effective and longer-lasting legislation, Montaigne believed. When friendship was undone by lying and charges of lying, it threatened the very basis of civilization because then their word was worthless…and a betrayal of society.

And so Montaigne would have had all liars punished severely: “Lying is an accursed vice. We are not men, nor have other tie upon one another, but by our word. If we did but discover the horror and gravity of it, we should pursue it with fire and sword, and more justly than other crimes.”

This, of course, is the lesson of Hamilton, which acts out nightly the results of Aaron Burr demanding Alexander Hamilton retract his inflammatory language about his integrity, about lying and accusations of “liar”: Weehawken. Dawn. Pistols drawn. There was a price to pay for such a breach in decorum and that price could be your life.

Fortunately, the public has developed a distaste for duels. “These are rules worth having,” noted Mr. Bernstein. “The only way anyone will learn from this is a sound defeat.” 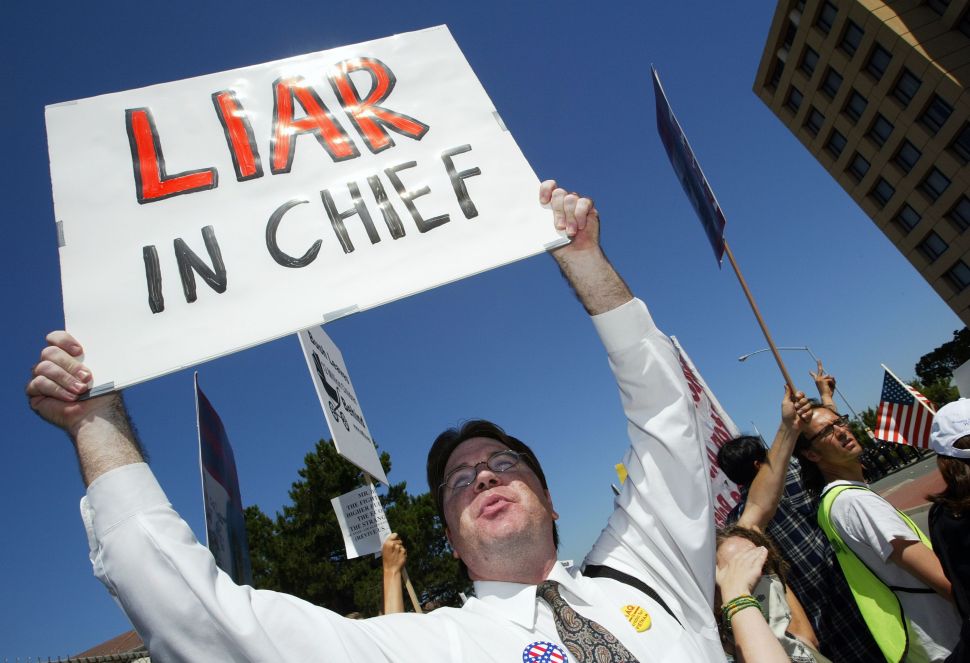