Ideally Donizetti’s Roberto Devereux should be a perfect “queen” opera, in both the “regal” and “obsessed fan” senses of the term. The 1837 melodrama, loosely based on the ill-fated love affair between Queen Elizabeth I of England and the Earl of Essex, boasts some of the composer’s most heartfelt music as well as a public-pleasing diva role for the conflicted monarch.

It’s a pretty spectacular accomplishment, then, that the Met could take so surefire a property and transform it into something as dreary as the company premiere of this opera that opened March 24.

The debacle seems to have developed from a basic misunderstanding of the work’s dramatic form, the “tragedia lirica.” To a composer of the 1830s in Italy, this kind of “tragic” musical drama would not imply anything austere or existential. Rather, it would be closer to our idea of historical romance or even a lavish nighttime soap opera, full of sudden dramatic reversals and reveals.

Any chance for “suddenness” in this Devereux was thoroughly quashed by conductor Maurizio Benini, whose grotesquely slow tempos, attenuated by long pauses between phrases, made me wonder if someone had slipped a Quaalude into my pre-curtain espresso.

Mr. McVicar’s hackneyed interpretation of the Elizabeth character leaned too heavily on the historical fact that the Queen was in her late 60s during her affair with Essex. So the singer of this role, soprano Sondra Radvanovsky, was made up to look like Jessica Tandy as the Crypt-Keeper and directed to twitch and dodder in the timeworn Bette Davis manner.

The sheer ugliness of her singing stood in stark relief to the unforced, limpid voices of tenor Matthew Polenzani (as Essex), mezzo Elina Garanca (as his mistress Sara) and baritone Mariusz Kwiecien (as her jealous husband Nottingham).

True, the two men struggled with the more bombastic pages of their roles, but Ms. Garanca’s singing from her first phrases defined what is meant by “Met quality,” abundant, sumptuous tone and generous phrasing. This is an artist we need to hear in the great roles of her Fach: Donizetti’s Favorite, for instance, or Eboli in Verdi’s Don Carlos.

Though I have to wonder whether the audience at the Met are ready to appreciate Ms. Garanca’s relatively subtle art: last night they cheered their heads off for Ms. Radvanosky’s vulgar exhibitionism. 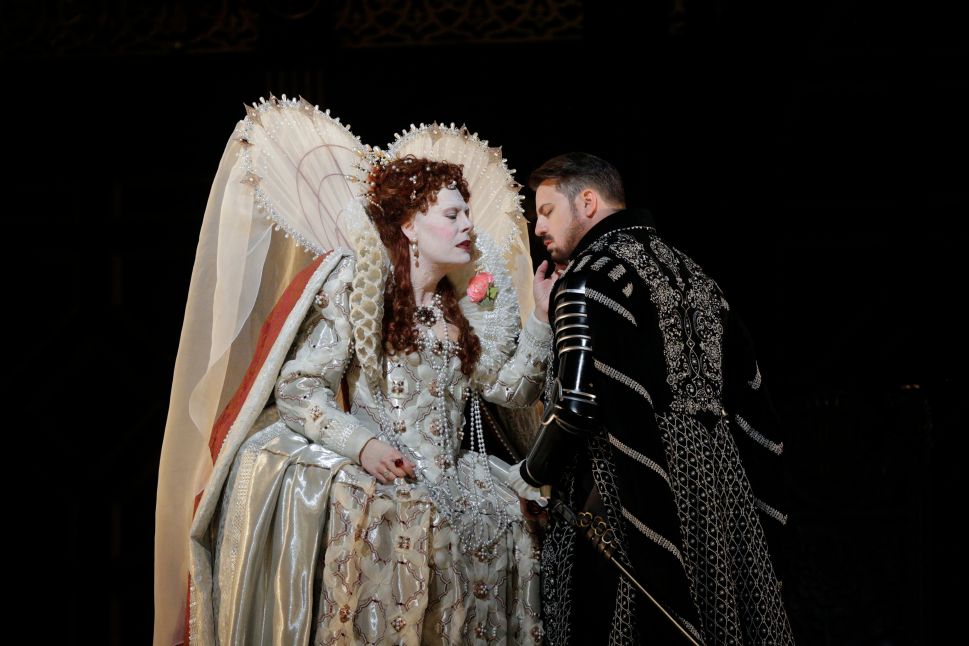