The meme famous for helping us explore the deep and existential questions actually began as a T-shirt design on LonelyDinosaur. A man named Sam Smith conceived of the idea in the summer of 2008, inspired by his friend Devin, who earned the nickname “philosoraptor” among their friends because he was a philosophy major and was always hunched over his desk thinking. In an email exchange with Memegenerator, Mr. Smith described how he designed Philosoraptor:

The image itself was a mix of several images of velociraptors I got online, which I compressed to one-color images, then mixed together. I took the jaw off of one at the mouth, and cut it open to make the mouth look like it was hanging open. The claw was based off an image of an eagle talon that I flattened, drew in some bits, and moved and enlarged one of them to make the raptor-like claw. The last thing I did was nudge the eye slit over to the right like three times, and that pulled it all together- really gives him that far-away look.

Mr. Smith copyrighted the design on October 8 of that year, and when Memegenerator launched in 2009, users started pasting text over the image, and that’s when it blew up. Today, Philosoraptor remains one of the most popular memes. Of its unintended popularity, Mr. Smith told Know Your Meme, “We put a creative commons non-commercial license on it, so all your stuff is cool and we think what you’re doing is great, but now everyone thinks that the shirt we’re selling is just something we cut and pasted off the web, which kind of sucks for us.”

Trollface, the rage comic also known as the “problem?” meme and “coolface,” wears a mischievous smile and is used to portray or identify oneself or another as a troll. According to Know Your Meme, Oakland-based artist Carlos Ramirez—known by his deviantART handle Whynne—based the image off a comic character called “Rape Rodent” and drew the image for an MS Paint webcomic about the pointless nature of trolling on 4chan’s video game board. He uploaded it to deviantART on September 19, 2008, and it soon gained traction on 4chan as the universal emoticon for troll. In 2009, it circulated Reddit and began gaining traction on other sites like Imgur and Facebook.

The original Doge (left) and a meme rendition (right). (Photo: Know Your Meme)

The misspelling of “dog” as “doge” dates back to June 2005, when it was mentioned in an episode of Homestar Runner’s puppet show. It wasn’t until 2010 that a face was put to the name when Japanese kindergarten teacher Atsuko Sato posted photos of her rescue-adopted Shiba Inu dog Kabosu to her personal blog, including the most famous Doge image that featured the dog with its head tilted sideways and paws crossed. From there, Doge went viral when it was covered by the Verge and submitted to Reddit, 4chan and Tumblr. In 2012, a blog launched on Tumblr that added interior monologues written in Comic Sans to Doge pictures, and today, this remains the most popular form of the Doge meme. 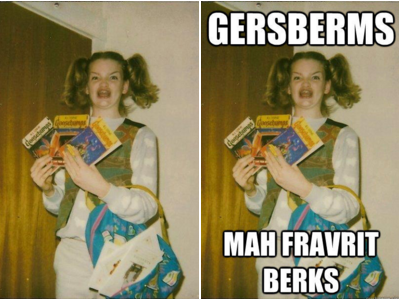 What was once no more than an awkward adolescent photograph is now one of the most popular memes of all time. It all started on March 14, 2012 when a post featuring the photo titled “Just a book owners smile…” was submitted to the subreddit /r/funny, which prompted another user to comment with a link to a Quickmeme submission of the photo captioned, “Gersberms / Mah fravrit berks.” That same day, the new image was posted on its own and reached the front page, accumulating over 17,000 up votes in two weeks. In the following days, it spread all over the Internet, eventually finding itself the subject an Etsy category, a Nerdist music video and so much more. Maggie Goldenberger, the photo’s subject, eventually came forward on Reddit and was later profiled by Vanity Fair. Jeff Davis, who never knew Ms. Goldenberger, is credited with first posting the original image, which he found randomly on Facebook.

The origin story behind Scumbag Steve is certainly unique. The photo—which is now accompanied with text revolving around drugs, partying and being a jerk—is actually from the cover of the rap album “Ma Gangsta” by the group Beantown Mafia. The image first surfaced in meme form on Reddit in January 2011, and immediately the man was recognized to be Blake Boston, also known as “Weezy B.” Within a few days, Buzzfeed published a compilation of “Scumbag Steve” memes and the scumbagsteve.com domain was registered. The Daily Mail soon published an interview with Mr. Boston, in which he revealed his mom took the famed photo that was later taken from his MySpace page.