You know, you’ve got to hand it to American Crime Story: not only is it the most entertaining drama out right now (well, depending on how you genre-qualify The Magicians), but it’s so goddamn thorough. This show could have easily spun out into the Marcia Clark Hour, or the Johnnie Cochran Experience, or even a Lego Movie spin-off starring Robert Shapiro’s big ole’ blockhead. But after last week’s practically Shondaland-esque “Sizzling romance-meets-high stakes courtroom drama,” The People V. O.J. Simpson: American Crime Story made good on its pedantic name to go BACK in time and make sure it double-dotted all its colons.

Now, this might seem like a letdown, or at least a momentum-grinding halt to the action we’ve seen build up linearly since the show premiered. Going BACK in time to see the original jury selection; sitting through the tedium and frustration of being on said jury…we’re basically talking 11.22.63-levels of “in real time” minutiae. But against all odds, Scott Alexander and Larry Karaszewski manage to keep us riveted through this whole process, which, in retrospect, may be the single most important episode of the series.

Because more so than Marcia Clark’s stridency or Chris Darden’s fumbling, more so than even Johnnie Cochran’s alliterations and O.J.’s celebrity, this was a case that had the country divided almost entirely on racial fault lines. White people, for the most part, believed O.J. Simpson was guilty of the murder of Nicole Brown Simpson and Ronald Goldman. Black people, for the most part, were so used to a corrupt, institutional racism of L.A.P.D. after the indignities of the Rodney King murder and trial that O.J. Simpson’s guilt or innocence was almost besides the point. What made this case so iconic was simply: neither side was entirely wrong, and neither were entirely right. The L.A.P.D.–typified here by handsome neo-Nazi wannabe Mark Fuhrman–was horrifically, inexcusably racist. AND O.J. Simpson murdered his wife and her friend. It was just that in this particular case, the L.A.P.D. had been too blinded by its celebrity worship to frame a black suspect for murder. Kind of a LOSE-LOSE-LOST situation, if there ever was one.

So: the racial makeup of the jury was incredibly important, not just for the defense and prosecution–seen here subbing their opponent’s picks for the grab-bag of alts to the tune of “Another One Bites the Dust”–but because of what they represented. Not a jury of O.J. Simpson’s peers, certainly, but something else. Something larger, more indefinable and perhaps even more destined to fail: a bloated pool of 22 souls who spent 265 days in what one juror aptly described as a “psychological experiment” of sequestration (no doubt referring to Milgram’s famed Prison one); so compromised by their own unnatural living conditions that Judge Ito should have called a mistrial. (The fact that Cochran’s team–the defense!!–is already worried about jurors transcending their racial category to side with their guards because of “Stockholm Syndrome” is a pretty good sign that something is rotten in Downtown L.A.)

And what about those jurors themselves? In the show’s source material, Jeffrey Toobin’s book The Run of His Life: The People V. O.J. Simpson, we find evidence that few parts of this week’s episode were manufactured wholesale. The Target v. Ross episode did indeed occur, although it was Jeanette Harris (later dismissed for her domestic abuse history), not Tracy Hampton, who brought this issue up with Judge Ito and lead to the “jury revolt” when the guards were switched over. I can’t find evidence of the Martin vs. Seinfeld dynamic, but the guards did get to veto any selection sent over from Blockbuster, which must have been a blast. In addition, the jurors weren’t allowed to watch the news, and many of them did become increasingly paranoid of bugs in their room. A juror was dismissed for taking notes that appeared to be for a future book about the case, and another, Francine Florio-Bunten, was taken off after Ito received a “tip” (that Toobin strongly implies was planted by the defense) from a supposed literary agent’s assistant about someone who matched her profile shopping around another one. However, Florio-Bunten has never published a book about the trial, while Michael Knox, who was dismissed for lying about his criminal record, released Private Diary of an O.J. Juror before the verdict (helped by Mike Walker from National Enquirer…who also co-authored Faye Resnick’s book about the case). Another dismissed juror, Tracy Kennedy, wrote Mistrial of the Century, while three jurors who made it to the verdict–Amanda Cooley, Carrie Bess, and Marsha Rubin-Jackson– co-authored Madam Foreman: A Rush to Judgment? in the aftermath.

Should we demonize these jurors the way Cochran’s team literally demonizes one old white lady alternate with that nickname? It depends on your perspective: for my money, the people who had to spend almost a year living in prison conditions, shut off from their friends and family, who lost JOBS and were paid a measly $15 per day for their services, deserve their day at the bank just as much as Johnnie Cochran, Marcia Clark, Jeffrey Toobin, Robert Shapiro, Christopher Darden, Alan Dershowitz, Dominick Dunne, Mark Fuhrman, LAPD officers Tom Lange and Philip Vannater, Faye Resnick, O.J.’s girlfriend Paula Barbieri, Cochran’s ex-wife Barbara Cochran Berry and the juice himself. The only justice here is that O.J. can’t cash in the paychecks for If I Did It, which a Florida civil court’s jury awarded the proceeds of to Ronald Goldman’s family, who promptly re-fonted the book to appear like this: 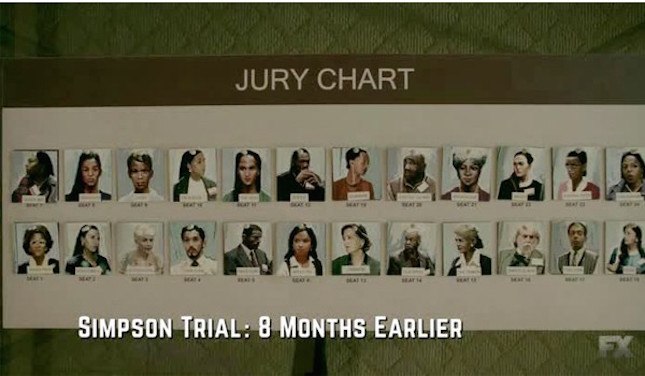