It’s getting harder by the day to separate the dramatized version of the O.J. Simpson case from the actual thing, as evidenced by last Friday’s L.A.P.D. press conference that a knife from O.J.’s house had been recovered by former police officer George Maycott, who had been holding on to it for 18 years as a souvenir (and whose memory was apparently jogged by watching Cuba Gooding Jr. on FX). It’s especially tricky to discuss “characters” on The People V. O.J. Simpson as such, without lapsing into profiling the actual people in the case. This is problematic, because the show–as evidenced most clearly last week in its “Race Card” episode–does ascribe motivations for dramatic effect in what it chooses to reveal, or not reveal, about its main players. Conversations are created from whole cloth–in the voice of the real people involved in the case–and this is understood without having to be spelled out for us, because audiences are smart enough to know that otherwise we wouldn’t be watching a scripted show with famous celebrities, but a documentary with well-paid reenactors. And even then, there are blurry ethical boundaries of what series creators choose to show and tell when they train their camera on true crime subjects.

But what can I say? It’s still very, very hard to talk about Marcia Clark: a woman who is up there with Lena Dunham and Hillary Clinton in the annals of history for famous victims of the modern-day Salem Wardrobe Trials. All three women have been tried in the court of public opinion and found guilty of daring to appear in front of the cameras without movie star looks. It sucks. It’s sexist. Coded language seems to blow around them like dirt around Pigpen in those old Peanut strips; their true selves have long been obscured by thick word clouds of “frumpy,” “shrill” and “brave.”

It’s not fair. It’s sexist. It’s demeaning. But here we need to take a step back and separate what we think or thought about Marcia Clark the person from the character of Marcia Clark on the show, and on the basis of that alone, I’m willing to go there: Marcia Clark is a pretty flawed person. She’s like…not the best mom? We can just go ahead and say that right? Marcia Clark: right about O.J. Simpson, wrong about letting her son use an electric carving knife to mash potatoes because she was too busy awkward-dancing with Chris Darden to “Who’s That Lady?”

And, again, this is not the real Marcia Clark that I’m talking about. It’s the show’s portrayal of Marcia. Before I read Jeffrey Toobin’s book the show uses as source material, before I delved back into a world I was too young to remember the first time around, I watched the first three episodes of The People V. O.J. Simpson and predicted that the show was going to have a B-plot about Marcia Clark getting a divorce and being called a negligent mother. It was clear from the first scene we have of her, stressed and scattered, trying to feed everybody breakfast and shuttle them all in the car before school, only to be distracted (and then strangely invigorated) by the news of Nicole Brown Simpson’s murder. It was clear from that mashed potatoes scene, which is pretty much confirms the Chekhov’s Electric Knife Rule. And it was clear from this episode, in which a link is drawn directly from Marcia mounting frustrations with the Simpson case to bad–and by “bad” I mean petty, neglectful and maliciously punitive–parenting.

Let’s start at the beginning, which is a tight shot on Marcia Clark’s annoyed face, before panning out to a courtroom empty of all spectators. For a moment, it’s not clear what we’re looking at, because Marcia’s on her side of the desk, but not with Darden, and the judge isn’t Ito, and the opposing counsel isn’t the Dream Team.

“If you continue to express yourself outside of protocol, I’m going to hold you in contempt!” the judge admonishes, before twisting the knife just a little: “I’m not Lance Ito.”

This episode is supposed to make us sympathetic to Marcia Clark in the way last week was supposed to contextualize the plight of both Darden and Cochran. We see Clark running from her divorce proceedings to the O.J. trial, belatedly trying to sneak past the line at the metal detector before being ushered to the back. Marcia Clark might be the definition of the meanest (and most on-point) hate tweet I ever received: “Harried white bitch.”

At least at this point, the prosecution is coming out ahead in the O.J. case. Which oddly conflicts with how the testimony of Nicole’s sister Denise really went down: we see it as a win for the prosecution, when in reality, the jurors and most of the public were put off by her stridency and felt– like Cochran did–that she was “crying on cue.”

How lame is Darden and Cochran’s continuing bitch-fight, by the way? “What the jury heard, they’re going to remember all weekend,” Darden says, breezing past Johnnie on his way out the door.

Haha, what? Like, I’m not even sure what Cochran means by that. Points for realism, as it definitely sounds like the kind of lame retort that most people come up with on the fly. On the car ride home, I bet Cochran was all “Ugh, did I really say ‘I certainly hope so?’ I SHOULD have said: ‘I certainly NOPE so.’ …Wait, dammit! That’s so stupid. Come on Johnnie, we’re better than this!”

It is ironic that Marcia Clark, the one person in Los Angeles who doesn’t give a flying fuck about celebrities, is now finding out how difficult it is to be one. While the newscasters bump Denise’s testimony until after the commercial break, there seems to be new end to roundtable discussions about how ugly the D.A.’s outfits are. And her terrible hair! The author of Looks Aren’t Everything, They’re the Only Thing (not a real book) goes on prime time to call her “frump incarnate” and lambast the prosecutor’s outfits by saying “This isn’t a look, it’s a cry for help.”

This is enough to win the audience’s’ sympathy by any standard, but, like last week’s preachy episode, the writers again over-extend the moment in an attempt to get extra points, only to push the moment over the edge from “devastating” to “cloying.” Clark is interrupted from her pity party by the approach of her adorable son asking silly kid questions about lunchtime protocol. For a brief second, we see Marcia Clark as a loving, attentive mother, which would be more believable if six episodes in, we knew either of her kids’ names. Instead, her son’s arrival just seems like a good excuse for Marcia to take her mind off her bad haircut for a moment.

Now, divorces are difficult. Everyone knows that. But it is telling that this story doesn’t give us any backstory on why Clark doesn’t want her husband to get more time with the children she’s obviously too busy to care for. By the way, we know her ex-husband’s name: it’s Gordon, as in “Jesus Christ Gordon, a petition for solo custody??!” Sure, Gordon is a wanker, going out in front of the cameras to blow up Marcia’s spot about her after-work plans. But it’s not clear why Marcia wouldn’t let her ex-husband–who we’re told has an excess of time on his hands–take the kids while she’s in the middle of this SUPER busy trial. Is it because he’s after more money? Is it because she’s worried that he’ll retain solo custody? Is it because he was abusive and manipulative? Who knows! All we know is that Clark treats him pretty much the same way she treats every man who isn’t Chris Darden: with furious dismissiveness tinged with disgust, like he’s a bug she found on the back of her shoe. If the show wanted to make Marcia Clark more sympathetic, maybe it shouldn’t have painted her as a complete misandrist.

Meanwhile, over on the defense side, we hear Cochran take control of the narrative. “We need to tell a better story. We need to get the jury around a fire and make them believe.” Cochran could be talking about the thesis of The People V. O.J. Simpson as well as the Dream Team’s strategy. Did Marcia Clark ever slow dance with Chris Darden? Rumors abounded during the trial of a possible tryst between the two D.A.s, but nothing was ever confirmed. In this retelling, Darden is a smitten puppy, and Clark the stocking-clad leg, steeling itself for an unwanted hump. 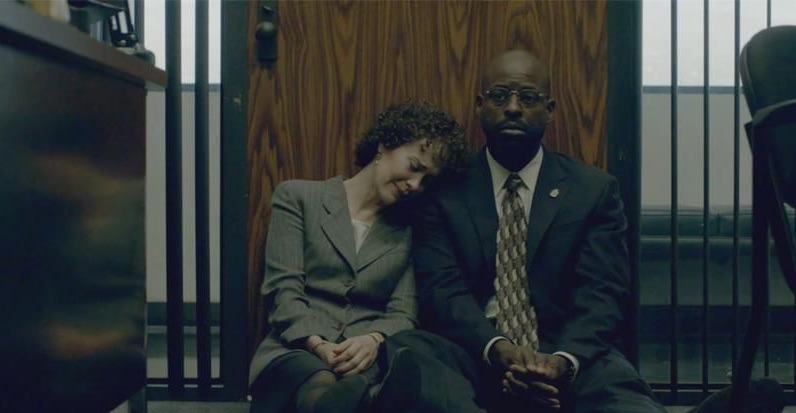