It’s hard being a lady-boss! It’s all downsides and practically no perks. Consider: While we hear all these stories about coked-out Wolf of Wall Street types treating their secretaries like slabs of meat, you hardly ever hear about a female boss seducing her subordinates. I mean, it probably DOES happen, but it plays out like Ariel Levy’s “Dirty Old Women” article, which found that both research and common opinion held that boys who had sex with their female teachers didn’t suffer from the trauma that came with the gender roles were reversed. Like many things in the O.J. Simpson trial, the relationship between Marcia Clark and Chris Darden reveals a lot of uncomfortable things about long-standing popular opinions.

Did Chris Darden not make a move on Marcia Clark because she was his boss and it would have been inappropriate, or because he was a pussy? Did Marcia Clark not GO FOR IT during their Oakland vacation (an oxymoron if there ever was one) because she worried about professional repercussions, or because she thought, as the man, Darden was required to make the first move. There’s a third option, which is that Clark wasn’t interested, but The People V. O.J. Simpson certainly doesn’t seem to think this was the case.

If Darden and Clark DID have some sexual tension brewing alongside the tepid District Attorney’s office coffee machine–and there is circumstantial evidence in both attorneys’ memoirs to suspect that may have been the case–did it not come to light during the event because the two were super good at hiding it, or because in a trial of salacious details, the copulation of two over-worked prosecutors letting off a little steam just wasn’t that fascinating?

It’s hard to imagine the latter being the case. After all, EVERY LAWYER had exes coming out of the woodwork and going on national television to besmirch the character of their former spouses. Not just Clark, who took the hit last week (fuck you Gordon!) but Johnnie Cochran, whose ex-wife and mistress went on A Current Affair to tag-team his reputation and raise the specter of his own domestic violence issues. It’s kind of fun to see Johnnie Cochran wig out like a paranoid Richard III and start claiming conspiracy: “Who the hell is behind this?! It’s the D.A.’s office! It’s…it’s…Shapiro!” Haha, nope. Hoisted by his own petard, Cochran can’t see that there is no bigger force at work here than his own celebrity status. Like Shapiro, like Clark, like O.J. and Nicole (who this week has her reputation further ruined when the defense implies– thanks to Alan Dershowitz’s crucial MID-HARVARD SEMINAR FAX– that her death was the result of an international drug cartel confusing her for Faye Resnick), Cochran’s personal life is now public property.

Still, Cochran is better at leaving his shit at the door than Darden, as evidenced by this week’s BIG COUP: the glove found at the scene of O.J.’s house. Now, this glove was supposed to MAKE the prosecution’s case. They found that receipt from Nicole that tied O.J. to the glove, and they had that glove witness on the stand and everything. There was enough evidence–again, circumstantial, but pretty compelling nonetheless–to allow the jury to connect the dots in their head. But Darden, who (as the show postulates) was feeling the burn of rejection after Oakland and needing to prove that he had some balls, allowed himself to get conned by Cochran by demanding that O.J. try on the gloves. (Something which, for some reason, the defense wouldn’t have been able to do. I forget why. Go look it up.) Cochran is all like “Oh, oh, PLLLLEEEASE don’t MAKE my client try on this glove that didn’t fit on human turkey Robert Shapiro’s talons!”

And then O.J. pretends to try on the glove (but bunches up his thumb and forefinger so they wouldn’t fit, or else it was the latex, or else it was because the glove wasn’t THE GLOVE but rather a replica pair of the glove found at the scene that was brought into evidence, or else because he didn’t do it and it really WAS a Colombian drug cartel?! We may never know!) and it doesn’t fit and you can hear Marcia Clark’s legs close faster than the entrance to the Cave of Wonders in Aladdin. 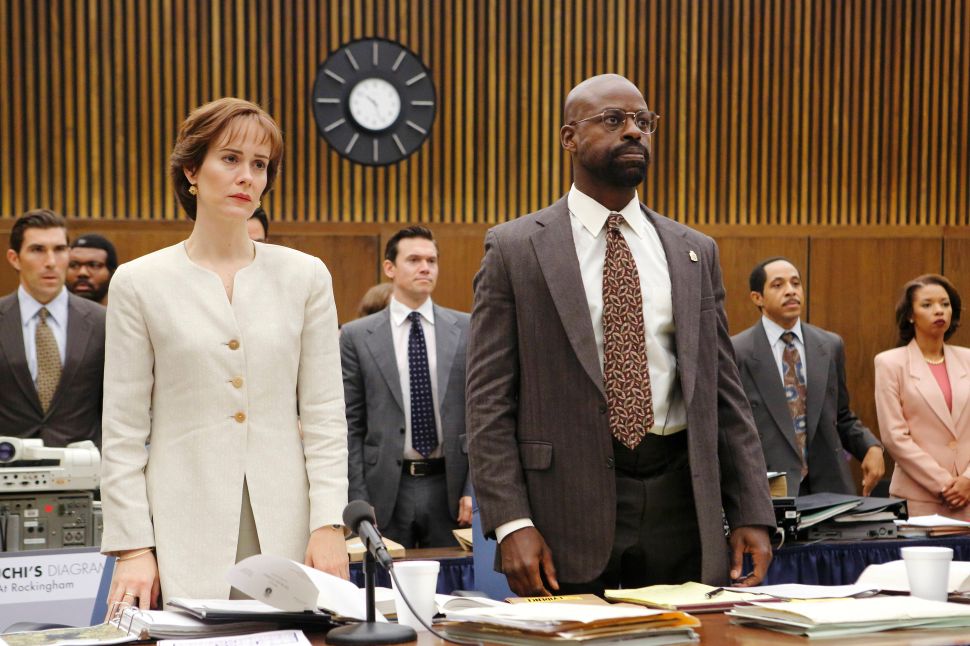