A photo of Hillary Clinton and George W. Bush smiling in embrace recently surfaced at former first lady Nancy Reagan’s funeral. The image gives light to the intimate relationship between the Bush and Clinton families—particularly that of Hillary and George W.

In the most recent Democratic town hall on MSNBC, Ms. Clinton told Chris Matthews her vote for the Iraq War—a manifestation of the Bush administration—was born from her agreement with George W. Bush to secure $20 billion toward rebuilding New York City after 9/11.

“I’m sitting there in the Oval Office, and Bush says to me, ‘What do you need?’ And I said, ‘I need $20 billion to rebuild, you know, New York,’ and he said, ‘You got it.’ And he was good to his word,” Ms. Clinton said. “Literally, that same day, I get back to the Capitol, and the Republicans are trying to take that money away. We kept calling the White House, Bush kept saying, ‘I gave them my word, I’m going to stick with it.’ So, you know, I had a different set of experiences.”

Ms. Clinton’s response was a tangent in defense of her vote for the Iraq War, which Senator Bernie Sanders—who voted against the war—often cites to highlight her poor judgment in foreign policy affairs.

‘As these cases illustrate, family connections can partly substitute for campaign skills, allowing candidates with insider status to get by with less raw talent.’

Despite the Bush family being Republican and the Clinton family being Democrats—especially as the polarity between parties is arguably broader than it ever has been in the past few decades—the two political dynasties have maintained a surprisingly close relationship. In a 2014, George W. Bush called Bill Clinton his “brother from another mother” on Instagram, in response to a tweet from Mr. Clinton about Mr. Bush’s latest book. That same year, in an interview with Real Clear Politics, Mr. Bush said of Mr. Clinton, “He’s got a good spirit about him. We’re the only baby-boomer presidents. We were both Southern governors, and we both like each other. He’s fun to be around. I hope he would say I’m fun to be around. And we’re both grandfathers.” In a separate interview with CNN, Mr. Bush described Ms. Clinton as his “sister-in-law.”

The 2016 presidential election marked the possibility of having another Clinton or Bush as President. Although Jeb Bush never gained ground in an overloaded field of Republican presidential candidates and an unprecedented voter embrace of the anti-establishment, Ms. Clinton’s aspirations for the White House remain intact as the Democratic National Committee and the Democratic Party rallied around her as their nominee before anyone else had a say.

Since the 18th century revolutions have been fueled by the abuse and corruption rampant in monarchies and family dynasties. When democracy took place, the people were heard and represented. The Bush and Clinton families have since circumvented what democracy, in theory, is supposed to accomplish: Although they were elected, their rise to power was ensured by the influence of George H. W. Bush and Bill Clinton. Each presidency built the foundation for another Bush and another Clinton to reach the White House.

Their closeness exhibits the façade and pseudo-dramas both political parties engage. Aside from a few differences in opinion on certain issues, both the Bush and Clinton families share moderate political stances, especially when it comes to foreign policy.

Hillary Clinton and Jeb Bush also shared many of the same wealthy donors—more than 60 of whom contributed to both campaigns, according to The Daily Beast. Given Ms. Clinton’s lead in the Democratic Primaries, she may revert back to her friendship with the Bush family and embrace past stances that are more in line with moderate liberalism and conservatism.

“If they came from different families, would either have been their party’s leading presidential candidate? Would they even have run for office?” asked Brendan Nyhan in a February 2016 New York Times article discussing the downsides of political dynasties. “As these cases illustrate, family connections can partly substitute for campaign skills, allowing candidates with insider status to get by with less raw talent.” 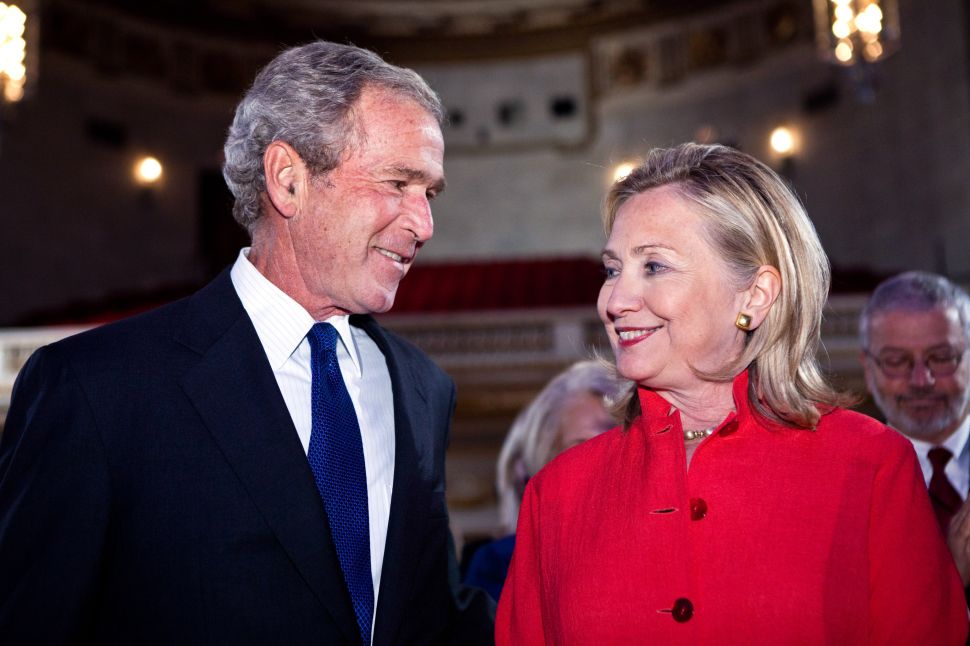