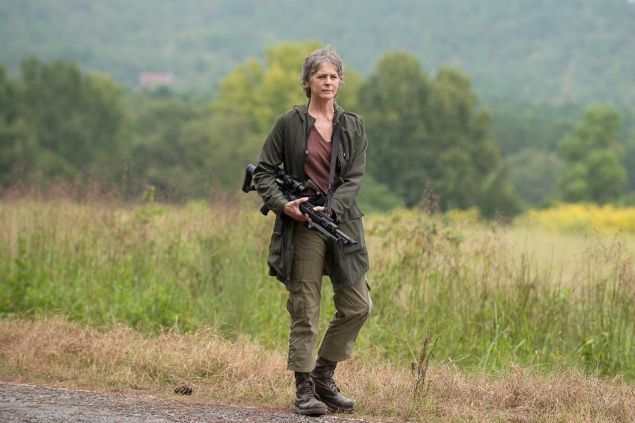 Is there any character on The Walking Dead more interesting than Carol Peletier?

When we first got to Alexandria, and Carol started wearing her sweater sets again and going around baking cookies and mothering everyone, it was portrayed as a disguise, a ruse to get the Alexandrians to let their guard down around this sweet, gentle lady who actually happens to be one of the team’s most formidable warriors.

But now that everyone in town knows and appreciates what she can really do, and there’s no longer any reason for deception, she hasn’t dropped the act. Because now we’re shown that it never really was an act in the first place. This is who Carol is—she’s both the person who forages for acorns to bake cookies for everyone in town and the person who calmly machetes the walker that comes across her path. The one who blew Terminus up with a rocket launcher and the one who lies awake at night, torn by guilt, listing the names of everyone she’s killed. The one who leaves a cookie on little Sam’s grave and the one who basically goaded him to his death.

And, of course, this is why it’s Carol specifically who is given the role of constantly fighting with Morgan over his pacifism (rather than, say, Rick, from whom she is keeping the extent of Morgan’s no-kill activities a secret). Carol deeply needs to believe that she’s not a killer at heart, that killing is something she does because she has to, not something that gets to the core of who she is. And here comes this guy who says, against all reason, that you never have to kill. That killing someone makes you into something else, changes who you are. And some part of Carol, the part that keeps her up at night staring at those names, suspects that he’s right.

In previous episodes, I’ve been annoyed by this fight between Morgan and Carol, because Morgan’s perspective seems so backward. As Rosita says, none of them likes to kill, but when the world is ending and survival is on the line, sometimes you have to. Everything we’ve seen so far on this show drives toward this conclusion. The people who aren’t willing or able to do what needs to be done, they’re the ones who don’t make it. In the face of this, Morgan’s pacifism is dangerously quixotic. And so their conflict has been boring, like watching a debate about whether the Earth is round or flat. We already know the answer.

But suddenly in this episode we’re not talking about killing someone like the sick Wolf, a person who is actively trying to kill you. Rick and Maggie have made a deal with the Hilltop to get rid of their problem with the Survivors in exchange for food. And the way to do it, Rick says, is to “kill them all.” While it’s almost certainly true that Negan and the Survivors would have eventually found Alexandria and done them damage, this planned attack is nevertheless verging pretty damned close to mass murder for hire.

So when Morgan stands up and says they should try to negotiate with the Survivors first, he’s not 100% wrong. It may not be the smartest or safest play, but it also means that Alexandria won’t suddenly now be a community of cold-blooded killers. Morgan’s certainly right that this kind of killing—calculated murder—will change you.

Ask yourself this: Could you slip a knife between the eyes of a sleeping man if you were pretty sure he’d try to murder you one day? I sure couldn’t. And if you can’t honestly say that you could either, then you have to admit that Morgan is right on some level.

This is what Glenn and Heath discover, as they stalk around the Survivors’ lair killing them in their sleep. It doesn’t really even matter that the people they’re murdering have grisly Polaroids of the people they killed collaged on their wall. They’re still knifing defenseless bad guys in their beds.

They get inside the compound through a cute little ruse involving finding a walker who looks enough like the Hilltop’s leader Gregory, cutting off its head, and then giving the head a little makeover via a haircut and a few hilarious punches to the nose. They present the trophy to the guards as their ticket in and manage to face-murder quite a few Survivors without raising the alarm. But eventually things get loud. It still comes off as all too easy, though: Barely anyone on our team even gets hurt, and even more suspiciously, they don’t encounter anyone who looks remotely like Jeffrey Dean Morgan. There must be some other Survivors still out there.

A suspicion that is confirmed when they’re about to ride out, mission accomplished, and a voice comes over the radio and announces that they’re holding Maggie and Carol. See, pregnant Maggie came along due to some misguided sense of duty, since she was the one who negotiated this deal with the Hilltop. And Carol has stayed back with her because new love-interest Tobin tells her that what makes her special is that she’s everyone’s mom. That, combined with her ongoing doubts that Morgan may be right, make her go into full protective mode toward Maggie and her unborn child. So they both stay outside to “watch the perimeter,” i.e. be useless and get themselves captured, and now their bad choices have put the plan and everyone in jeopardy.

Also making poor choices: Abraham, who up and decides to leave Alexandria because he’s a big gruff man with lots of man feelings who can’t just break up with Rosita like a normal person but needs to abandon civilization to do it. Because of all the toxic masculinities on this show, his is possibly the most toxic. Definitely the dumbest.

And speaking of dumb masculinity, where was Carl all episode? Just off-screen, babysitting? 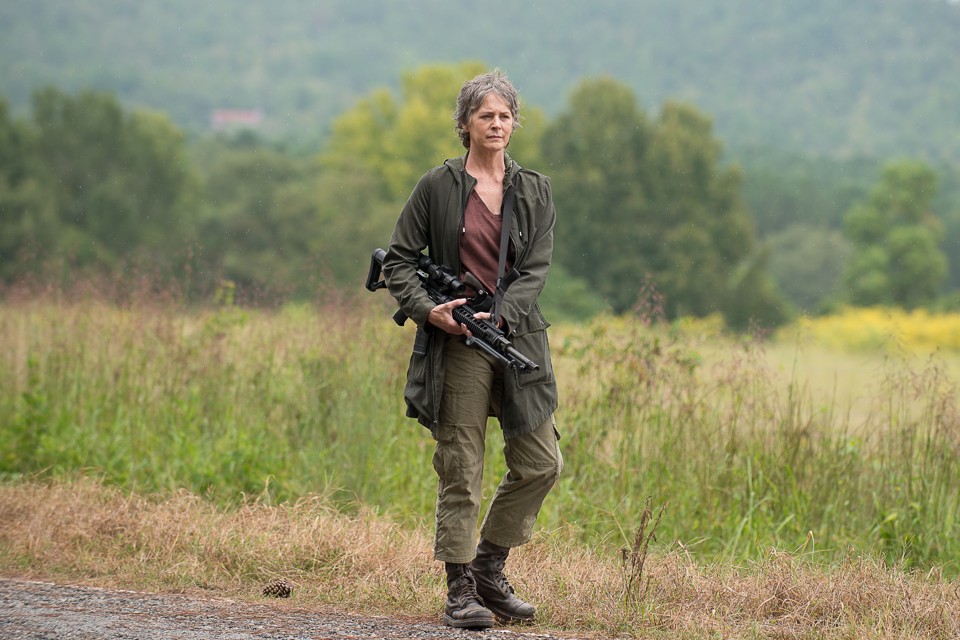