If The Walking Dead just full-on turned into The Carol Show, would anyone really mind? Well, maybe the legions of Daryl Dixon fanatics out there—but the two of them already have such a good platonic rapport going (they have yet another touching moment at the end of this week’s episode), I’m sure we could keep him on as her sidekick or something.

After last week’s action-packed episode, which managed to spend a good amount of its non-murder running time focused on Carol’s motherly protective feelings toward her friends and her related ambivalence about her own prodigious talent for killing, this week focuses on her even more, elaborating on these themes at length, as Carol struggles to keep her soul intact while struggling to keep herself (and Maggie and Maggie’s unborn child) alive.

Nowadays Carol finds herself in the strange and unenviable position of being a killer who acts out of compassion—the group’s violence-seeking conscience, its gentle protective angel whose face you can’t look directly at or you’ll die in flames. It’s a role thoroughly at odds with itself, and clearly (in the weeks since Morgan’s pacifist nonsense has started worming its way into her thoughts) it’s beginning to tear her apart.

And just in case it wasn’t thoroughly obvious that that this set of issues is specifically gendered female—or at least that that’s how The Walking Dead wants us to see it: Tobin told Carol last episode that she can do the violent things she does because she’s a mother—her antagonists this week are a group of women.

Last week, when Rick & co. were running amok through the base, we didn’t see a single male Savior. Only the voice that came over the radio at the very end, demanding the release of the last survivor, was female. And as this week’s episode unfolds, with Carol and Maggie finding their angle against their captors Paula, Michelle, and Molly, we get a portrait of the apocalypse as filtered through a female lens. Not a stereotypically “feminine” one, mind you—these women are all survivors, cold-blooded killers, and not particularly inclined to sympathy for those who exterminated/would have exterminated their friends—but one nevertheless focused on issues that women particularly face in this new world: their embrace or rejection of traditions and traditional roles, their distinct perspectives on weakness and strength, pain and hardship, and, of course, their responsibility, or lack thereof, for the perpetuation of the human race.

Delving into these would be well beyond the scope of an episode recap (though clearly the academic papers about gender in The Walking Dead that will inevitably be written in the years to come are going to have a field day with this episode). But this does start to explain why Carol’s opening gambit as she tries to find a way to escape from captivity is to immediately reveal Maggie’s pregnancy to their captors. My first thought was: Wait, why is she giving them this information? Their abductors are already at an advantage when bargaining with Rick, as they have two prisoners to Rick’s one. Now she’s telling them that Maggie’s even more valuable than they thought?

(Side note: How obsessed are the creators of this show lately with the movie Children of Men? It was a fantastic movie and all, but the references are becoming a bit thick on the ground if you ask me. I mean, we already had a pregnant character on the show seasons ago, but nobody was treating Lori like the freaking Virgin Mary…)

Carol is fully wearing her meek housewife mask at this point, though, and it is clear that this revelation of Maggie’s status is a ploy, if not for direct sympathy—which Maggie does not get—then at least as a tactic to measure what kind of people these women are, and to get them to open up a bit more.

Carol and Maggie then push it further by aligning themselves with the Savior women against the sole male member of their group, Donnie, who Carol had shot and is slowly bleeding out over the course of the episode.

Eventually, despite themselves, their captors do indeed begin opening up. So we learn that Paula, the group’s shrewd and tough leader, used to be a secretary with a husband and four daughters; she was trapped with her boss at the end of the world and, seeing that his weakness would be her downfall, she killed him. We learn that Molly is dying of lung cancer and that Michelle lost her boyfriend to Daryl’s RPG blast and then lost her own unborn child.

And in the end the gambit pays off: Though they give little outward signs of sympathy, the three women do let their guard down a little—enough, at least, to leave Carol and Maggie alone while they go prepare to meet the Saviors’ “scout crew” and fight off Rick & co., giving our heroes enough of a chance to stage an escape.

It’s important, though, that even thought it is part of her plan, Carol’s concern for Maggie’s child is also genuine. Of course it is—that’s why she stayed outside the compound with Maggie in the first place. This gets to the core of who Carol is: It’s not that somehow half of her is feminine and motherly and the other half is a badass killer. Or that one of these parts is the real her and the other is the mask. They both come from the exact same place. Carol is at once expressing real concern for Maggie’s child and using that concern to find an advantage over their captors. Much as she is actually really terrified and using her rosary beads to calm herself, and at the same time making the Saviors ignore that she is holding a tool in her hands that she can use to get herself free.

Which she does, cutting through her restraints with the sharpened end of the crucifix and going to free Maggie. And then the two of them systematically work their way through their kidnappers, killing them all. They let Donnie turn walker and then use him (future gender scholars take note!) to kill Molly. Then, with her gun and knife, they best Michelle and Paula. Though Carol, in full flight from the killer she’s becoming, really wants to let Paula go. It’s Maggie, who made the devil’s bargain with the Hilltop, who has to urge Carol not to let any of them go—and then it’s Paula, amazed that she got taken in by Carol’s “frightened little bird” disguise, who finally goads her into doing it.

That’s far from the most brutal of the carnage, though, as they still have the approaching “scout crew” to deal with. In the best scene of the episode, Carol turns down the sides of her lips in an approximation of Paula’s mouth and mimics her into the walkie-talkie, telling the scouts to meet them on the (all too aptly named) “kill floor.” (I guess they’re in some kind of slaughterhouse? Again?) Then they just douse the floor in gasoline and set the bad guys on fire.

The smoke leads Rick & co., who had been tracking them, directly to Carol and Maggie, who are both extremely shaken by the whole thing. Carol, devastated by her choices, clutching the cross so hard her fingers bleed. And Maggie, gasping for breath and forgiveness, finally realizing that she can’t keep going to war.

Then Rick, taking the group’s final captive at his word that he’s Negan, summarily executes him. He’s not Negan, of course. Molly claimed that Negan wasn’t so much a name as a title all of the Saviors use. But that’s not true either. It appears we’re going to have to wait a few more episodes to meet the big bad himself. 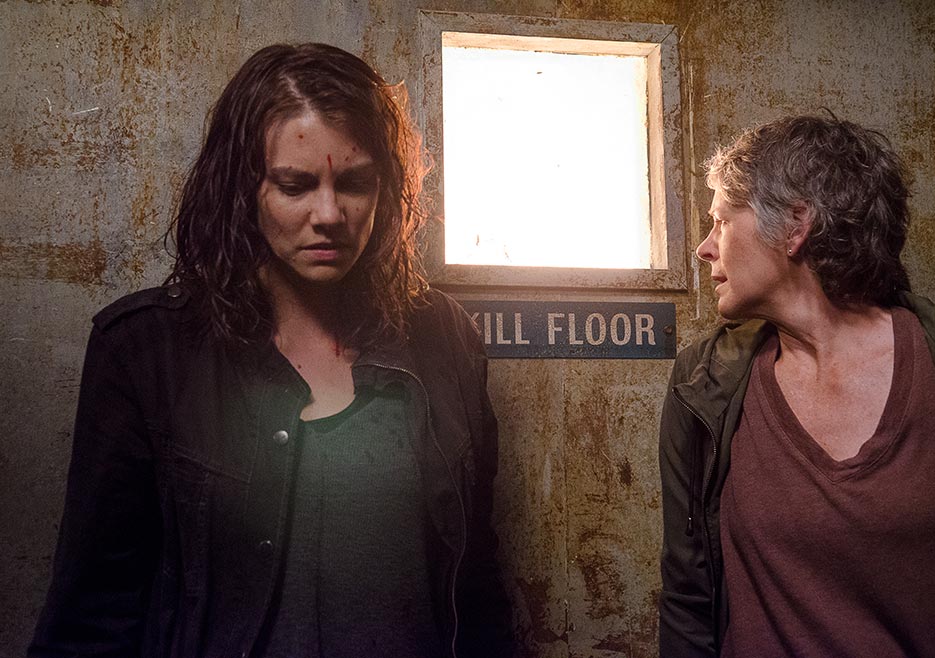