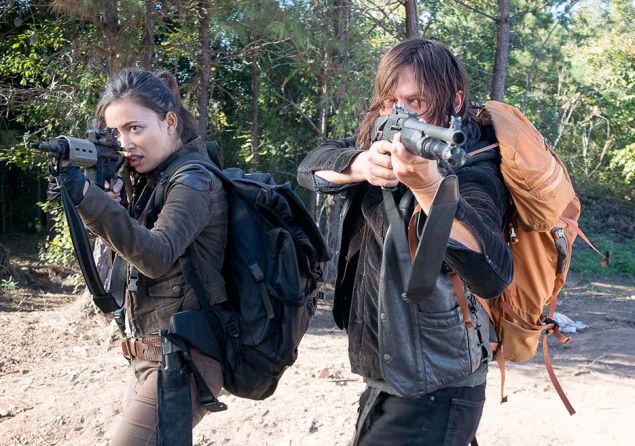 When your “calm before the storm” episode features a woman getting killed with a crossbow bolt through the eye, you know you’ve got a show that’s hard to watch. I love it, but each week it just gets a little bit more difficult to stomach, no?

Several weeks have passed—we don’t know exactly how long, but enough for Alexandria to have fallen into something of a routine. Guard duty. Patrol. Stocking the pantry.

Enough time has gone by that Rosita’s found a new super-clingy beau in Spencer. Enough time for Tobin and Carol to be in some kind of relationship, which seems mostly to consist of Carol sitting on a porch swing chain smoking and fondling her recently-very-useful rosary. Enough time for Morgan to have finished his mysterious welding project—which turns out to be a jail cell. Rick thinks that’s kind of nuts, until Morgan explains that having one will at least give them choices next time. Hard to argue with that.

Enough time hasn’t, however, gone by for Tara and Heath to return from their very long supply run (which they oddly kept mentioning in previous episodes but never actually told us anything about except that it was going to be weeks long). So long that Tara’s girlfriend Doctor Denise starts getting itchy and weird about the fact that she didn’t take Tara up on her offer to come along.

So all stir-crazy and feeling like she’s not contributing enough (um, you’re a doctor? Literally the rarest and most important kind of person left in the world?), Denise decides she needs some experience outside the walls and devises a stupid plan to go out there. She asks Daryl and Rosita to be her chaperones, for reasons that sort of make sense if you don’t think about them much. She wants Daryl to know he makes her feel safe, because he reminds her of her reckless and angry deceased twin brother. And Rosita needs her sense of herself as a strong woman reinforced because Abraham left her—or something? Denise used to be a psychiatrist, remember. It still seems like an odd reason to make someone your bodyguard on this idiot mission.

Not that the mission itself is dumb—she knows where a stash of medicine might be, and medicine is vital these days. What’s dumb is that she claims she needs to come along to identify the right drugs for them to pilfer, which is silly because a) she could have written them a list, because the names of drugs are written on the bottles, and b) when they get there they just take everything on the shelves anyway, rendering her presence entirely useless.

So she just wanders aimlessly around the pharmacy until she finds what seems to have been a man who drowned his child to shut the kid up. Which freaks her out, understandably—but is just sort of a yawn for us, because this is The Walking Dead and we’ve been through six seasons of this by now. And maybe it’s terrible that we’ve become numb to baby-killing, and maybe that’s the point. But it also underscores just how profoundly different Denise is than people who haven’t been behind walls this whole time.

Paralleling her story is that of Eugene, who goes out on his own similarly productive-if-weirdly-planned mission with a similarly capable bodyguard, Abraham. They’re on their way to a factory forge that Eugene thinks may allow them to make their own bullets. He keeps the purpose of their trip secret until they get there, for no apparent reason except to watch Abraham’s impressed reaction.

But that’s not the dumb part. The dumb part is that Dr. (not a doctor) Tennessee Waterfall isn’t content with being the brains of the operation; he wants to be a badass. He’s killed some walkers now and knows how to use a machete, so he feels like he’s well on his way to being a warrior like all of his friends. So when a walker happens upon them in the factory, Eugene calls “dibs,” as if dibs is a thing that exists in the apocalypse. And then when he has some trouble killing the thing—its skull is protected by a layer of hardened lead (kudos to the show for continually finding new weirdly deformed walkers to show us)—he gets super pissy when Lt. Handlebars steps in to save him. Because of the rules of dibs, dammit.

So the two of them have an unnecessary and grating junk-measuring contest, which concludes with Eugene idiotically declaring that he doesn’t need Abraham’s protection anymore, and Abraham even more idiotically leaving him to fend for himself.

Meanwhile, Dr. (actual doctor) Denise is off getting herself into even more trouble for no reason, and while giving an impassioned speech explaining exactly why it is a great idea for her to get into trouble, a crossbow bolt shoots right through her eye, killing her dead. And yes, it’s a good reminder that sudden deaths can still be shocking on this show.

But this one really shouldn’t have been. See, at the beginning of the episode Daryl is tending to his motorcycle, which he has been reunited with. Maybe you made this connection, but I hadn’t: The bike Primo came roaring out on two episodes ago after the raid on the Saviors, that was Daryl’s old bike that the obnoxious hipster dude jacked along with his crossbow from him earlier in the season. Now it’s clear that they were members of the Saviors, and so it stands to reason that there are likely lots more Saviors out there. After you killed so many of their friends. Probably out plotting revenge. And still they’re all just like la-di-da, just another routine day in Alexandria, let’s go for some casual runs for pharmaceuticals. Instead of preparing for the obvious war right over the horizon.

Anyway, the bolt came, of course, from Daryl’s own crossbow, shot by the hipster dude himself, Dwight, now disfigured by a burn on half of his face—presumably his punishment from Negan for running away. With him he’s got a bunch of guys with guns, and a captured Eugene on his knees. See what becomes of terrible decisions and useless pride, kids?

Luckily Abraham hasn’t left Eugene completely alone; he’s off lurking in the shadows. And Dr. Tennessee Waterfall comes up with a pretty decent distraction—he bites down on Dwight’s crotch as hard as he can. Abe, Daryl, and Rosita take immediate advantage of the situation, kill a few of their attackers and set the rest on the run.

But now Alexandria knows it is going to war. The Saviors are on their way. And everyone is mobilizing. Well, except Morgan. And except Abraham, who’s decided it’s now time to go pitch woo to Sasha. And Carol, who is leaving town because she can’t deal with being a killer anymore. For her, the equation has become very simple: Being good at killing + Being around people she wants to protect = Being a killer. So she’s gone. And if you think that’s the last we’ve seen of Melissa McBride, you’ve clearly been watching some other show.

And—what was the point of all this? Do we really need episodes focused on people like poor dead Denise and penis-biting Eugene, who are at best minor figures, and not particularly interesting? (Throw had-two-lines-until-this-season Rosita into the mix as well.) Do they really carry the story forward? By now, it seems pretty evident that The Walking Dead keeps introducing new figures into its ensemble primarily to 1) provide people they can kill off to keep the stakes high but without devastating viewers by offing fan favorites, and 2) remind us how high those stakes are by showing how easy it is to get into real trouble if you make stupid choices, but avoid having to have our seasoned pros go out of character and actually make those stupid choices. Whatever it all is, it doesn’t add up to a very interesting hour of television. 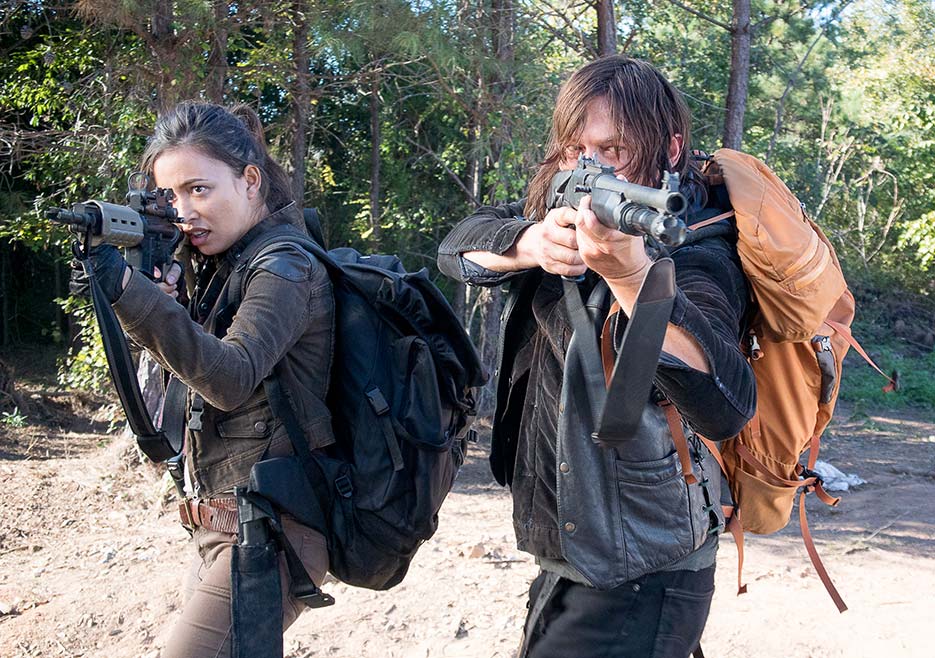