In case you were wondering, even though she’s soured on the idea of killing people, Carol Peletier is still a stone-cold badass. Meanwhile, everyone else is still an idiot.

I mean seriously, guys, what is going on with you these days? You’re supposed to be like the ultimate survivors, but you all keep making such impulsive, likely-to-get-lots-of-your-friends-dead choices.

You’re obviously making preparations for what is bound to be a huge battle with the Saviors. You all seem to know it—you’re building new lookout posts, hiding weapons around town, adding guard shifts. But when two different people decide to leave town (for their own dumb reasons), those of you who just happen to be closest to the gate at the time jump into cars to chase after them? Even if this non-plan plan removes some of your best warriors from town, thus leaving Alexandria more exposed than ever?

At least Carol’s reasons for leaving are somewhat reasonable. She doesn’t want to keep being a killer, and being around people she loves and things she needs to protect makes killing necessary. Her actions in her one scene (the only truly engaging part of a very weirdly paced episode) demonstrate this clearly. Attacked by five Saviors, she singlehandedly kills all but one of them in signature Carol style: this time, with a machine gun hidden literally up her sleeve. But her desperate tears before she starts shooting make it obvious how deeply she hates being put in this position. She basically begs the men not to make her kill them. She’s like Bruce Banner begging his attacker not to make him Hulk out. But if these guys capture her, she makes Alexandria more vulnerable; she has to kill them, but that horrifying look in her eyes means she just can’t stand it.

Of course, if she was still back behind the walls, she wouldn’t have been putting Alexandria in any risk at all. Not to mention that she knows as well as anyone that living out there on her own, she’s going to have to kill people no matter what, just to survive. So this “I can’t be a killer anymore” runaway plan seems a bit suspect.

What makes even less sense is the fact that Rick, quasi-leader, shoutiest father figure, and certainly military commander of Alexandria, takes it upon himself to go find her. Not only is he needed at home, but Carol explicitly asked that nobody come after her. It’s not like they think she can’t take care of herself, so why exactly is it so important that they go chasing her right now instead of staying behind and doing your job of protecting everything else you claim to love?

But Rick doesn’t even hesitate, he just jumps in the car with Morgan and they go off in pursuit. Morgan seems to be on the hunt because Carol’s flight is his fault, for infecting her with pacifism. Or at least guilt. Less than a logical choice for either of them, the pairing really just seems to be an excuse for long meandering scenes of Morgan and Rick talking in that existential mode that Morgan seems to force everyone into. Nothing really gets said that hasn’t been hashed over to death by now, but Morgan does confess to a shocked Rick his shady dealings with the creepy Wolf. Also, Rick finally comes right out and says that Carol was right to murder the sick people back in the prison.

After tracking Carol for a while from the scene of her Savior-killing triumph—and failing to notice the fifth, shot-but-still-living Savior hanging around—Rick leaves Morgan behind to find her. So maybe the whole reason Morgan came along was so that just when things are looking at their worst for our heroes during next week’s finale, he can ride up on his steed of self-righteousness and save the day? (Of course we’d rather Carol than the guy who doesn’t kill, but that’d be a little repetitive, no?)

Daryl also goes running off, so chewed up over Denise’s death—which he’s decided is his fault for not killing Dwight when he had the chance—that he’s determined to track Dwight on his own. Which: come on, man. If you think you know how to track the bad guys, then just bring a whole army with you. Or do what Rick says: Wait for them to attack Alexandria, which they will inevitably do, and kill them from a position of strength. (Which is the exact opposite of what Rick said when convincing them they needed to go attack the Saviors’ compound, but ah well, who really needs consistency from your leaders anyway.)

But we should be used to Daryl going off half-cocked by now. The obnoxious part is that Michonne, Glenn, and Rosita just drive off after him without pretty much any rationale or plan. And then when they catch up with him, Rosita decides that instead of trying to help him back, she’s joining him. And I guess Glenn and Michonne just give up trying to convince them and head back?

So what was the point of this whole trip except to have them all divided into two small groups in the woods and easy to capture? Which they are, of course. And Dwight shoots Daryl at the very end of the episode, at close enough range that we may not be seeing much of Norman Reedus again. Except that Dwight says “you’ll be alright” over the blackout, so maybe they’re pulling some kind of a Glenn/Jon Snow on us. Again.

Maggie either has a premonition that Glenn has been captured or is having a miscarriage or both. Which is even more scary when your town’s only doctor went and got herself dead yesterday.

And maybe Maggie’s complications are stress-induced? She’s the one spearheading the town’s new security measures in her role as the new Deanna. Toward the beginning of the episode Michonne and Rick discuss Maggie’s plans while sharing an apple in bed. Just in case you think that their return to a state of relative peacefulness is a good thing. There’s always a snake in the garden, right? I usually like the religious imagery in The Walking Dead, but this one struck me as way over-the-top.

As did the episode’s cold open, which teased Carol’s human-shishkebobbing badassery by showing us gruesome images of its aftermath: bullet holes through a windshield, a spike dripping an unholy amount of blood on the pavement, Carol’s rosary tangled on the ground. A device lifted straight from the Breaking Bad playbook—so much so that it seemed pretty close to outright theft. The Walking Dead has a lot going for it, but it’s no Breaking Bad. And just because you’re both AMC originals doesn’t mean you get to steal their ideas. I’m sure nobody’s looking forward to the season finale in which Rick sees a horde of walkers stumbling over a hillside and is inspired to singlehandedly invent post-apocalyptic television advertising. 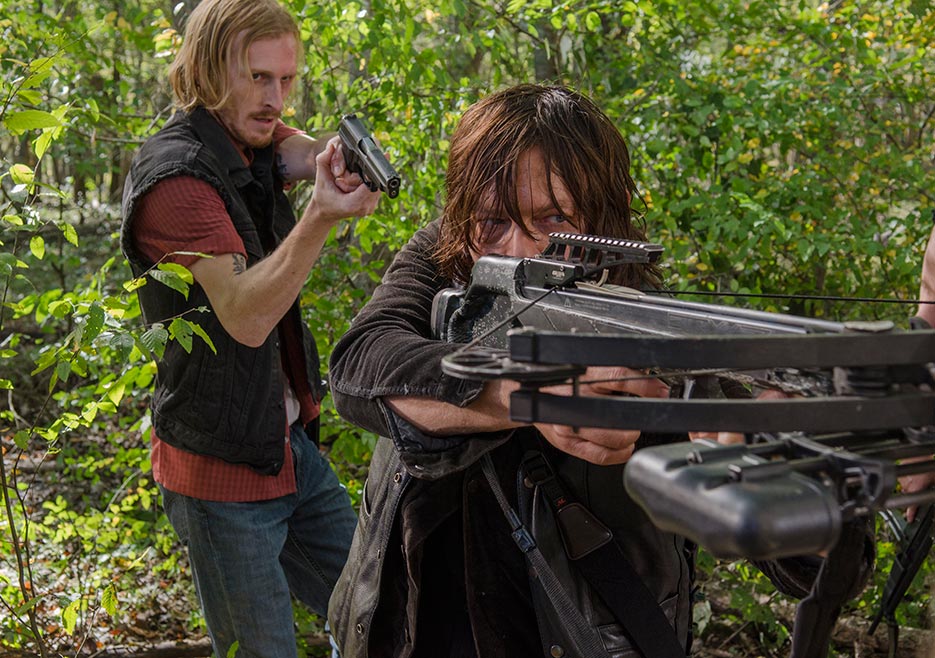