During the holiday of Easter, Christians throughout the world commemorate the Crucifixion and Resurrection of Jesus Christ. Yet for one group of Christians in Iraq and Syria, this Easter will not be celebrated with chocolate bunnies and colored eggs.

The Assyrians are an indigenous people of Mesopotamia who have a long history, spanning over 6,700 years. Though the Assyrian Empire came to an end in 612 B.C., the Assyrian Christians of today are the descendants of that ancient civilization. In the first century C.E., the Assyrians became the first people to convert to Christianity as a nation. The official language of the three main Assyrian Churches is Syriac, which is a dialect of Aramaic, the language that Jesus would have spoken during his lifetime.

Prior to the Islamic conquest of the region, the Assyrian Church had an estimated 80 million adherents. Today, their worldwide numbers have been reduced to a little over 4 million. Continuous murder, rape and forcible conversions to Islam have led to as much as 95 percent of this ancient community being forced to live in diaspora.

It is up to Americans of all faiths to put pressure on the Obama Administration to call the Assyrian Genocide by name—and stop it.

The Assyrian Christians are suffering genocide at the hands of ISIS, in the worst possible meaning of the term. Since ISIS conquered the city of Mosul in June 2014, all 45 Christian churches have been destroyed, converted into mosques, turned into Islamic headquarters, or shuttered. As a result, tens of thousands of Assyrians in Northern Iraq have fled persecution at the hands of ISIS. Those who do not pay a special tax against non-Muslim religious minorities face a choice between exile and death.

In Syria, 400 churches have been destroyed. More than 700,000 Christians in Syria have been forced to leave, out of a population that formerly numbered 1.1 million. In areas controlled by the Islamic State, Christians have been crucified, beheaded, raped and subjected to forced conversion to Islam.

“Crucifying these people is sending a message and they are using forms of killing which they believe have been sanctioned by Sharia law,” says Patrick Sookhdeo, Director of the Institute for the Study of Islam and Christianity.

Crucifixion is certainly a favorite method of execution by the Islamic State, being used frequently since March 2014 according to CNN. In Syria, two children were crucified for not fasting during the Islamic holy month of Ramadan. A 12-year old Christian boy was crucified, after his fingertips were chopped off by ISIS militants. In January 2015, 17 Syrian men were crucified in what the International Business Times called a “crucifixion frenzy.” The crucifixions continue to this day, with ISIS-aligned militants threatening to crucify Rev. Tom Uzhunnalil.

ISIS does not simply want to wipe out Christians from the Middle East, but also to purge any historical evidence that Assyrians or other pre-Islamic civilizations existed. In March 2015, ISIS destroyed the 3,000 year-old Assyrian city of Nimrud. The tombs of the biblical prophets Jonah and Daniel have also been destroyed, with ISIS announcing that it will transform the former site of Jonah’s resting place into an amusement park.

The genocide against Assyrians by ISIS is the latest in a string of Islamic attempts to erase them from existence. From 1914 to 1924, the Ottoman Empire carried out a program of extermination against the Chaldean, Syriac and Assyrian populations. Taking place alongside the Armenian Genocide, Turkey’s rulers continued killing long after the empire had been dismantled. Dr. Israel W. Charny, Executive Director of the Institute on the Holocaust and Genocide, estimates the toll at 750,000 dead.

In March of 2015, the U.S. House of Representatives voted unanimously to characterize the Islamic State’s atrocities in Iraq and Syria as “genocide.” Several days after this Resolution 75 was passed, Secretary of State John Kerry grudgingly acknowledged that the actions taken by ISIS did in fact constitute genocide. President Obama has yet to decide whether genocide is occurring against the Assyrian Christians and an official policy by the White House has not been formulated.

One thing is certain; time is running out for the Assyrian Christians in the region. Not only are Christians literally being crucified, but the root of Christianity itself is coming dangerously close to being annihilated forever. It is up to Americans of all faiths to put pressure on the Obama Administration to call the Assyrian Genocide by name—and stop it. 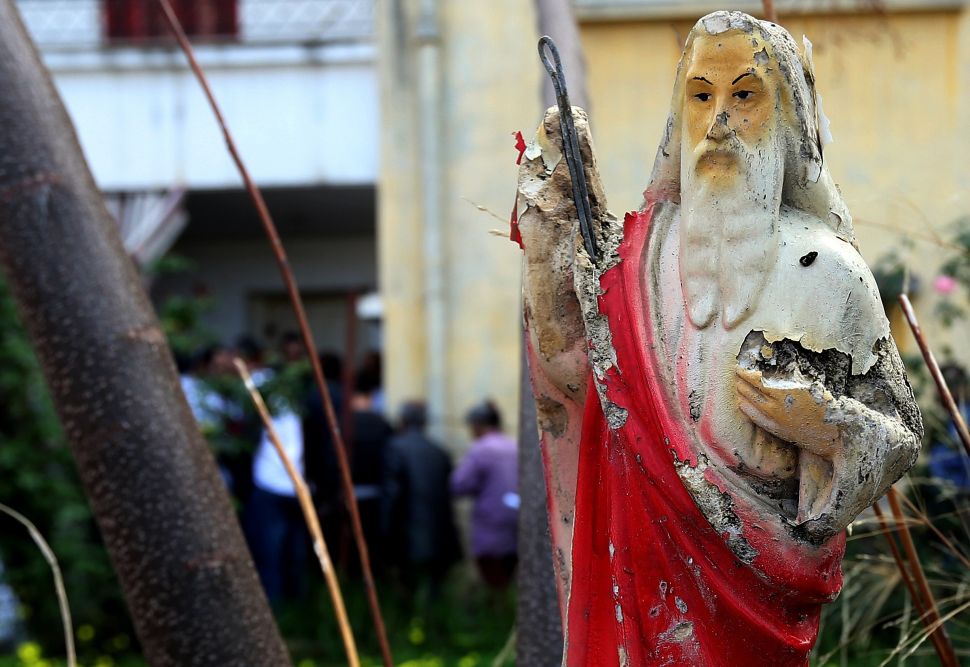