Over shots of Jameson in her Greenpoint loft, Sonia Agostino, designer of Tableaux Vivants, showed me her latest collection of high-end latex fashion pieces. “Go ahead, touch it,” she said, handing me an almost transparent ocher raincoat with large pointed lapels. “I use Vivishine, which is a really moist lubricant,” she explained and we both chuckled. “That keeps the latex supple.” Indeed the material felt sexy, glossy and slick in my hands. The raincoat itself was fabulous, cut in the classic noir style of Humphrey Bogart, but suited more to a modern-day fashion flasher.

Influenced both by tutoring from the Baroness and by taking a fashion eye to lingerie, she created a black “Bunny Bodysuit” worn by Kylie Jenner on Interview Magazine’s December 2015 cover. But she also creates pieces such as a bright yellow Happy Face Josh Top featuring an emoji smiley face surrounded by metallic gold and a glorious bright red trench, which her boyfriend has been gallivanting around town in. “He gets his picture taken in it all the time,” she grinned with pride.

Tableaux Vivants pieces are full of camp, pop, whimsy, bold colors and sexy silhouettes, yet there is also something luxurious and timeless there, too. This is more than mere trashy, lightweight one-wear club wear or Halloween garb. “I evolved as I grew up,” Ms. Agostino confessed. “Tableaux Vivants is more polished and more aligned with who I am today. I love the clean and shiny aesthetic. But these clothes are also intended to be conversation pieces and are meant to be seen.”

The latex itself is an instant conversation starter and Ms. Agostino is dedicated to her material muse. “I insist that everything head to toe even is latex,” she said. “There’s something about it that feels amazing and there are always challenges working with it that I like to discover. I feel like it allows me to achieve newness in design, bringing latex into structures you would see in high fashion.”

“Tableaux Vivants is all about fulfilling fantasies for people,” said Ms. Agostino. “Me as a designer, artist and person, I want to make it happen for people. I treat it like art and it allows me to have creative freedom.”

Ms. Agostino’s creative drive started when she was growing up in New Jersey in the ’80s, dancing to Madonna. “I was a little Jersey girl. Madonna was everything, and Dolly Parton and Barbie, I think that’s who I envisioned dressing,” said the designer, laughing. “I would play in the dirt in plastic high heels, which I loved. I remember being 6 years old, telling my mom I wanted to be a fashion designer and she thought that was really funny. But I always knew.”

Immersing herself in the wacky, vibrant world of downtown Manhattan in the late-’90s, the designer enjoyed soaking in the larger-than-life personas that populated a still seedy New York, where artists could afford to live in sparkling squalor. Then fresh out of college, Ms. Agostino’s time working with Garrow Sparrow, an avant-garde designer, was formative. There she began learning about corset making and working with chiffons while cutting fabrics at midnight with Todd Oldham and eating candy corn.

“I remember going out on Avenue A to a basement with drag queens who were so tall they had to lean down to dance,” she reminisced. “Everything was so wild, colorful and fun. It was very influential. Garrow Sparrow and I did a lot of custom work for Amanda Lepore. We’d do things like make a dress for a man who wanted to look like a glamorous woman but in flames. So we’d cover spandex in red and gold Swarovski crystals and just make insane shit that made people so happy.”

Since beginning to build Tableaux Vivants as a brand, Ms. Agostino’s clients have changed, but her passion for realizing other people’s visions and bringing them to life in her own unique way is as prevalent as ever. She was recently asked to move her studio intoBeyoncé’s practice space and sit down with the singer to design custom latex pieces. “It was really cool,” she explained. “The girl knows what she wants. She’s a performance artist so it has to move and look good on stage. Side note: I did not make that VMA Miley Cyrus outfit. She should have come to me.”

Like her fashion, Ms. Agostino is sassy and real and shows no sign of stopping. Tableaux Vivants puts out a collection every season of at least 15 to 20 pieces. The designer has also collaborated with Chromat, VPL, designed a clutch for a Creatures of the Wind runway show, and a hat for The Blondes. Her latex leg body bands could be seen on all of Beyoncé’s back up dancers in her epic, fiery Super Bowl performance.

On Tableaux Vivant’s success, Ms. Agostino is matter of fact. “I don’t ever feel like I’m being overwhelming. It has just enough balls.” 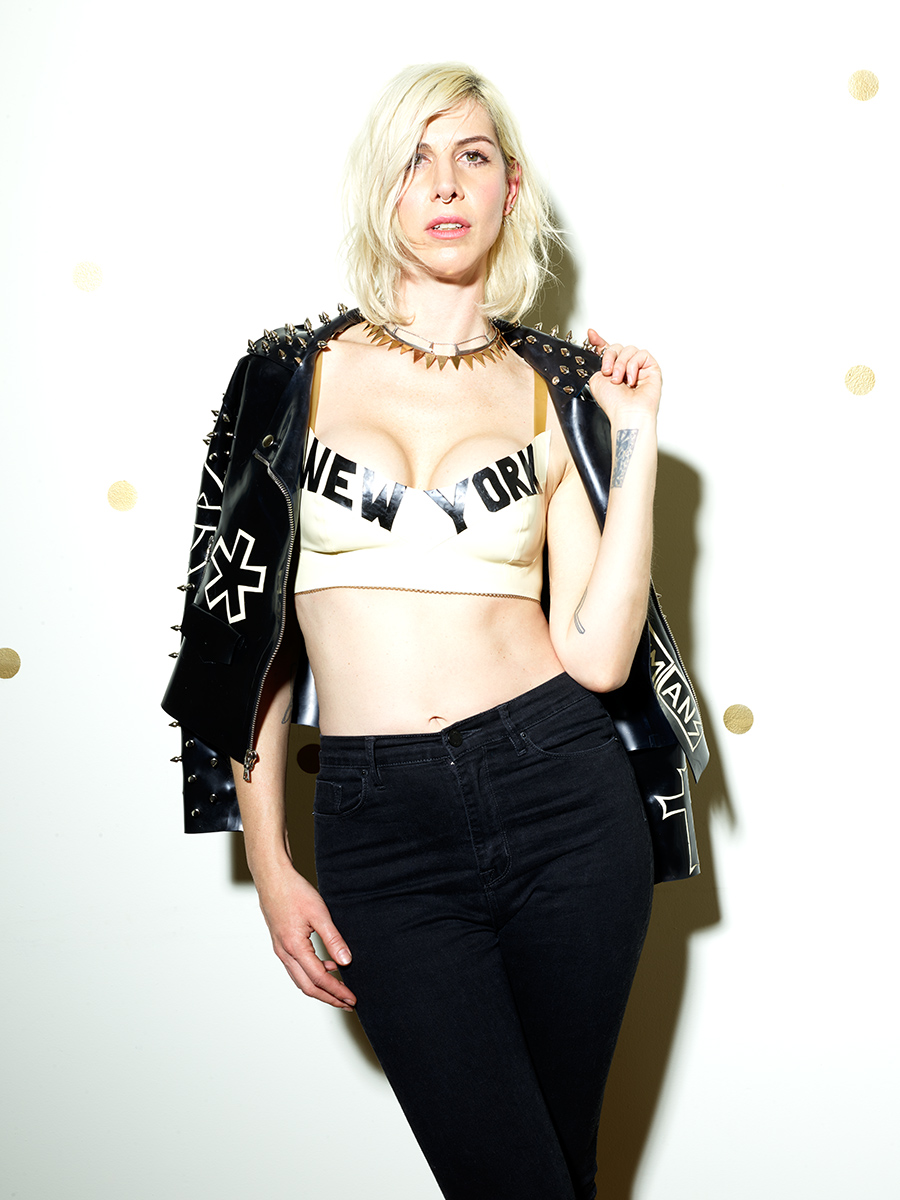