Remember how shocking it was when Mike Huckabee invoked the Holocaust last year?

Here’s what happened: Questions surrounded President Obama’s security deal with Iran, which was one of the biggest stories of the summer of 2015—if you forget Kim Davis or the donut that Ariana Grande licked. Would lifting sanctions actually lead to dismantling of the rogue state’s atomic agenda? Despite some healthy skepticism early on—which was based, as it should be, on actual security concerns—discussion mainly hinged on whether or not the deal was safe and if it was a positive step for global preservation. The actual provisions in the deal were analyzed. Inspections. Centrifuges. All of which is to say, it was actually encouraging to see a political culture with the attention span of  an episode of Dance Moms really tune in on an important issue and think it over on its merits.

Except that: During the conversation, former Governor Huckabee took a break from pandering to Evangelical voters by defending Josh Duggar and attempted to frighten Jewish voters by saying that the nuclear deal would lead to nothing short of “marching Israelis to the door of the oven.” This was one of those things where you get a shock wave that’s actually physical. See, despite a right-wing tradition going all the way back to early 2009 that loves to invoke the Second World War at the drop of a hat (“The Obamas getting a second dog is like Germany in the thirties!” heaved Fox & Friends), this comparison of a policy deal to death’s actual threshold was scandalous. I don’t necessarily peg Mr. Huckabee’s wane as candidate to that one moment: but it sure didn’t help. It might even have ushered him a little faster to exit, unnoticed, stage right.

What a difference six months makes.

In the intervening toboggan run downwards, we’ve actually debated the Ku Klux Klan. And who knew there was a pro and a con there? The Klan always seemed to me above point/counterpoint, and an exemplar of a moral absolute truth that I thought to be incontrovertible, but, then, I’ve never thought about booking Jeffrey Lord on television. I thought that as an American there was no need to be fair or balanced about the Klan, and that the Klan was one story where there weren’t two sides. Thank you 2016: I stand disgusted, yet corrected.

It’s obvious that this dark mood is most exemplified by activity at the campaign rallies of Donald Trump. That’s not breaking news at this point and is a story that will continue to unfold in real time, and be examined. But there’s something else that goes way beyond that campaign or its events: it’s reflected by what I can only describe as fury that’s almost bloodlust on the right. And it’s not just in the margins. This is in the mainstream Republican side of a Presidential race.

In 2010, I was horrified when sitting members of Congress held up signs from a balustrade on The Mall exhorting Tea Party protestors below to “Kill The Bill” during the churning final days of frantic Affordable Care Act voting. And sweaty gasbags screamed, “You lie!” and, “Baby killer!” at the President on the Floor of the House. I remember being flabbergasted that people whose station would suggest control, or at the very least not chaos, would use terms that push at pressure points until they threaten to break. Then it was Sharron Angle and her “Second Amendment solutions.”

Fast forward. At televised Republican debates the crowd gleefully roars approval when they hear words like “death penalty” or “gun” or “rape, incest and the life of the mother.” Scary words. Violent words. They seem to want to tear something apart and rip its limbs off. And not just the individual mandate, EPA regulations, or the Common Core.

I guess my point goes back to the lesson our mothers told us, or hopefully told us, as small children. Words matter. And yes, I see a movement that started with “Kill The Bill” and paused at “leading to the door of the ovens” and now has deposited us in this current radioactive wasteland.

Images at those rallies resemble the twisted faces behind Elizabeth Eckford as she walked into Central High. White, but out of control and red with rage. Now people have progressed from getting shoved to getting punched in the face—and, post-punch, as if the puncher somehow left the job unfinished, he was quoted as saying that, next time, they “may have to kill him.” Last weekend some weird old lady did a ‘Heil-Hitler’ in a widely distributed image. Not to be outdone, a guy with a mustache did his own reciprocal sig-heil and screamed that people should “go back to Auschwitz.” And now, this week, there’s word of militias forming. Dude, let me be the not-first-one to say that any sentence that starts with “militias,” unless it accompanies a retelling of the Battle of Lexington and Concord, does not end well.

Over the past several years—and coming into sharp focus during the course of the campaign—it’s gone from bad to worse. And please bore somebody else with platitudes about “the public doesn’t want politically correct career politicians!” or, my least favorite and the most meaningless, “it’s not an establishment year!” Bull. It’s something else. The establishment has been mean and cruel before, and said—and legislated—terrible, heartless things entirely bereft of humanity. After all, look at the history of the United States for the first three hundred plus years—or at Simon Cowell or that odd little lady with the glasses who said that you were the weakest link. But until this sustained, white-hot period, I rested assured that the arc really did bend toward a more perfect union and that, despite fits and starts in social justice, and the fact that we are very imperfect, different people all jumbled together, there was a broad agreement and a basic understanding that bound us together. That seems to be hanging by a thread.

And it’s only March.

Jon Reinish is a native New Yorker who works in political communications, strategy and media. 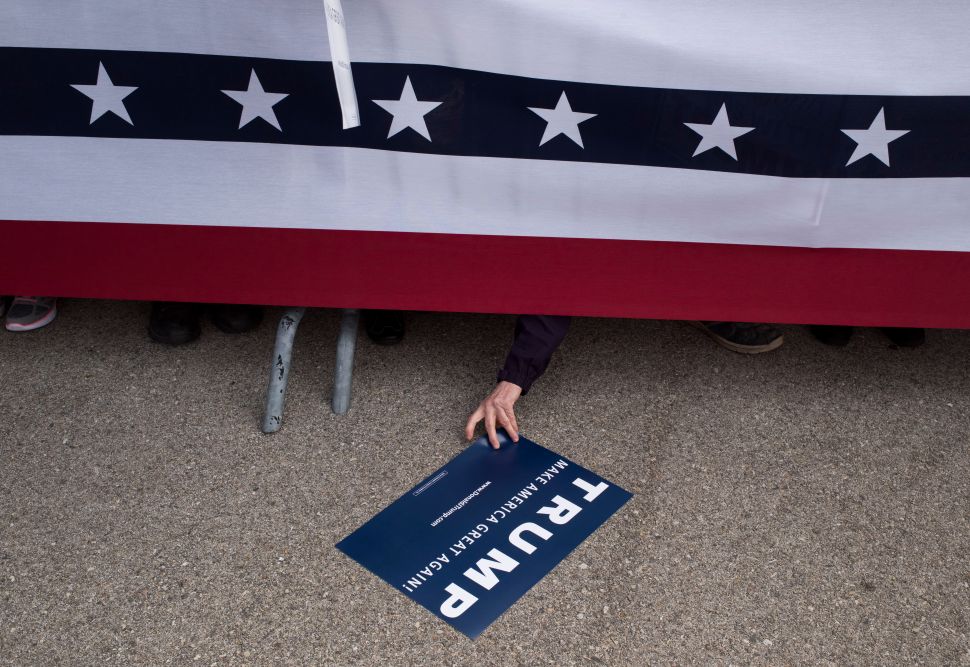