Except for her famous, funny, spot-on sendup of the ridiculous Sarah Palin, Tina Fey’s comedy talents have always eluded me. But in an effort to become a bona fide movie star so steeped in desperation that it has left her with a sweaty brow, she has finally hit pay dirt with something called Whiskey Tango Foxtrot. The absurd title, which misleads you into thinking it’s a frivolous comedy, has nothing to do with the film, which is a fearsomely vivid depiction of the life and career of investigative reporter and war correspondent Kim Barker, who left a lucrative job as a New York writer in 2003 to cover the war in Afghanistan. The movie doesn’t know if it wants to be a hard-hitting drama about the pitfalls facing the media that tried to sell an unpopular war to the weary, grieving public following 9/11, or a romantic movie about a disillusioned lady journalist in harm’s way who found empowerment on the front lines, surrounded by the Taliban. The choice it makes, with mixed (but mostly strong and positive) results, is to be a little of both. I found it flawed but fascinating, and a no-fail showcase for Tina Fey’s real talents as a serious actress. Best of all, this movie is never boring for a single minute.

Based on the real Kim Barker’s memoir The Taliban Shuffle, the screenplay by Robert Carlock, for some mysterious reason, changes her name to a fictitious Kim Baker. In the film, she’s an unhappy, unfulfilled woman who volunteers for a dangerous assignment in Kabul to escape from a wimpy, ineffectual boyfriend. A poor reason to risk your life and look death and destruction in the eye, if you ask me, but once she arrives in the dirt and danger, she hits the ground running, under the guidance of the slick directing duo Glenn Ficarra and John Requa, who turned I Love You, Philip Morris and Crazy, Stupid, Love into cinematic keepers. The collision between a privileged white Western female with balls and the oppressed, tortured and second-class Afghan women furnishes Kim with human-interest features, but the new producer back home (Cherry Jones) cuts back her air time to favor her best friend, rival reporter Tanya (Margot Robbie), who betrays her to get a grittier story. In the course of making her mark, she interviews warlords, the first woman bus driver in Kabul, and fights off seduction by the Afghan attorney general (a miscast Alfred Molina).

Breaking rules, defying orders and watching her colleagues die, she also loses her boyfriend (Josh Charles), dodges bullets, narrowly escapes death in a disco bombing, befriends a tough Marine colonel (a silver-haired Billy Bob Thornton, living up to his vow to look different in every film), and sleeps with and reluctantly falls for a crude, charming and roguish Scottish war photographer, played by Martin Freeman, a dashing actor from the U.K. who steals the movie.

We get a close look at the sordid living conditions and personal relationships of journalists who will do anything to crack a story, while learning a whole new terminology about war at the front (a “wet hooch” is a coveted tent with a shower). They lie, cheat, sabotage and betray each other to get a scoop home to American viewers who have already lost interest in Afghanistan, which by 2006 was labeled “the forgotten war.” The rewards are small, but the personal and political lessons Kim learns are life changing, while Tina Fey’s growth as an actress is even greater. 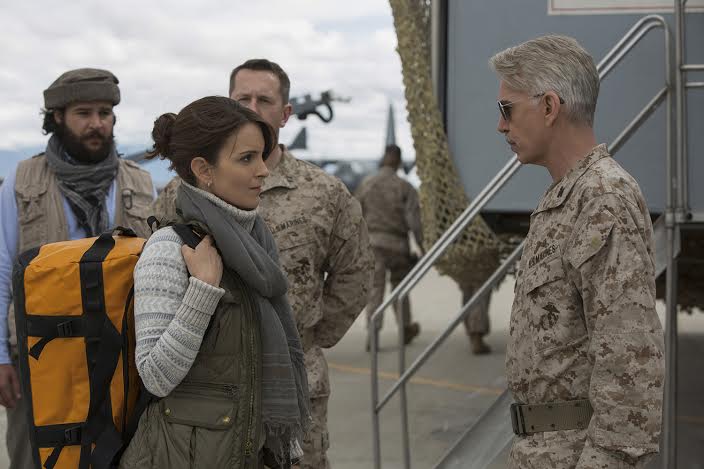