When this show closes a Gillian Flynn Cool Girl door, it opens a Gillian Flynn Cool Girl window. Case in point, Chrystie, and her vocal fry blow out of the Pierson/Pappas Dune man-cave by leaving behind a Dear Alex note delineating her jealousy over their bromance. Truth be told, Brett was prancing around Alex in a beige bodystocking, so it’s not like her suspicions of a gay affair are entirely unfounded. Anyway, I guess she didn’t win the coveted role of Princess Irulan or Lady Jessica in their low rent avant-garde Frank Herbert production. However, before Chrystie’s corpse even gets cold, we’re introduced to hipster beer-swilling Natalie, she of the pierced nose stuff and extensive vinyl collection. Her meet cute with Brett takes place in his Uber with a sauced Natalie laughing a little too hard at Brett’s Bruce Hornsby jokes before inviting him in after his electric car conveniently runs out of power in her driveway. Anyway, both Chrystie and Natalie serve a purpose. They are both soothing distractions from Michelle and Tina, the complicated women who challenge two men who’d rather regress into their glorified shanty of a living situation and reimagine old sci-fi novels.

If you think Alex is bothered by Chrystie’s abrupt departure, think again. He’s too busy saving the new director Dudley from his own substance abuse demons, You might recall Dudley from last season when he basically ruined Brett’s professional life by being impossible to work with on that Into the Canyon movie. If you’re a Duplass completist, then you know actor Joshua Leonard from when he and Mark Duplass tried and failed to make a gay porn film together in the 2009 Lynn Shelton movie Humpday. Despite some awkward making out and pawing at each other, their pesky heterosexuality got in the way. Ain’t it always the way? Anyway, Dudley is also a big Dune fan, so as far as Alex is concerned, all past grievances are forgiven.

In this incarnation, Leonard plays a guy bottoming out on coke and booze so hard that he doesn’t even pay attention to the scenes in front of him, let alone call cut when they are really over. And the fact that he’s so checked out is really saying something given that Alex is now styled like he’s Bronson Pinchot making a cameo in a Hellraiser movie. Is he an Eastern European pimp? Is he a vampire? Is he a Cenobite that’s really into Dead Can Dance? Is he all of these? Sometimes the show within the show feels more compelling than the show. This fictional sex trafficker vampire show at least as compelling as the Dune musical within the show, which currently exists as an explosion of fabric swatches, notes blanketing the walls, and haphazardly constructed costumes covering every inch of Brett and Alex’s bachelor pad.

Outside of the bachelor pad, the bloom has started coming off the rose of Brett’s Uber job given that he was a casualty in a brawl between what looked like two female marketing executives after a two-for-one happy hour special. Of course, sex with hipster Natalie is a definite perk to participating in the otherwise volatile sharing economy,

Sex with Natalie is also a welcome distraction from the fact that Brett is probably at the frostiest point in his marital limbo with Michelle given that he rages out at her after she tries to assure him that David left the charter school project. The mere mention of David’s name causes Brett to erupt into an impotent fury and it’s pretty clear that if there’s any progress to be made, it’s happening at a glacial pace as Brett is essentially checked out of either making a decision on how to move forward or addressing the topic of Michelle’s infidelity (and remorse) in a productive way. Before this hurdle, Brett was essentially checked out of their marriage before he suddenly decided to be present and emotionally available. Things happen on Brett’s timetable, and he’s not above taking the marriage hostage until he’s good and ready to address his issues. Classic Brett.

As for long-suffering Michelle, well, she’s still suffering. Sure, she fucked up by having that tryst with David, but Brett is making sure to put her through the ringer for as long as possible. There’s almost a subconscious sadism in how he’s stringing Michelle along while he makes up his mind. Plus, it seemed especially infuriating that Michelle acted like he was doing her the biggest favor by watching his own kids for ten minutes before Tina came over to play perma-nanny.

If Michelle can’t get any support from Brett, at least she’s getting it from the meticulously manicured Anna. The housebound former attorney is always quick with a compliment, a pot lollipop, and a flattering lip gloss in a neutral shade. She’s also adept at manipulating a construction worker trying to run a game on Michelle at the expense of the school. Anna fires the grifter and brings her own vetted construction team with the greatest of ease, It’s almost as if she’s been waiting to pull the trigger on this power move.

As for Tina, she’s still completely in love with her nephew, even when she’s literally covered in his shit when he lets a wet one fly during a shopping trip.  In an emergency scramble, she brings little Frankie back to Larry’s house to clean up and literally hose the baby down. Tina understandably panics when Larry comes home, given that she thinks he despises children and Frankie is screaming his head off. Truth be told, Frankie is probably crying at the sight of Larry’s mustache. That thing becomes skeevier with each passing episode.

Surprisingly, Larry manages to subdue Frankie with his gentle nature and some Cheerios. Hey, Larry is remarkably good with children. It turns out that he loves kids. He just loves the fun of playing with other people’s kids and then giving them back. He’s only interested in a kids with benefits program, but actual parenthood. However, Tina comes to the realization that she might want kids and Larry encourages her to pursue her ambitions towards motherhood, just not with him.

You can love someone, but it still might not work because, at the end of the day, the two of you just want vastly different things out of life. Having kids isn’t something that’s really negotiable. You’re either buying a ticket for that boat ride or you aren’t. It’s not like bargaining down to adopting a dog is going to satisfy someone with a strong yearning for motherhood. I guess Larry didn’t think through what demanding Tina let him take care of her might entail.

As she’s fleeing the comfort of Larry’s home and hot tub, she makes a desperate call to Alex, but thinks better of it and hangs up after he answers. Sure, Tina is “frighteningly tenacious,” but sometimes she actually resists following through on an impulse. Especially when in a vulnerable state. Some might call that growth.

Thanks to Amanda Peet’s sparkling and nuanced performance, Tina’s complicated trainwreck shenanigans are often the most entertaining parts of the show. She’s funny, vulnerable, raw, and endearingly damaged. Tina is wonderful and complex. It would be a shame if she became just another middle-aged woman on TV with a single-minded drive to reproduce.

Tina is at her best when she’s mildly crazy, just not baby crazy. 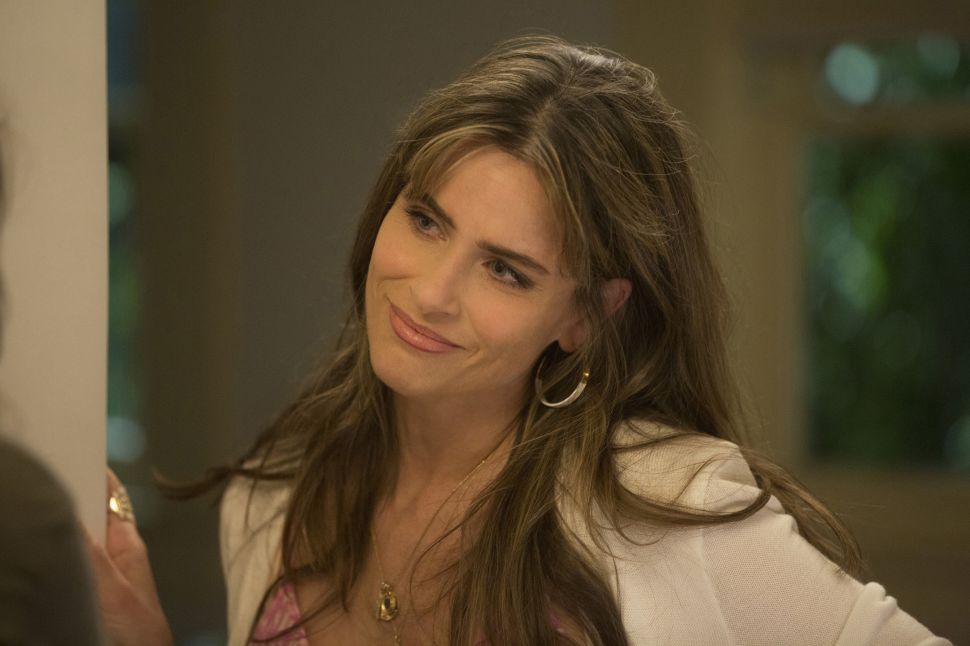