Time to pour out a little craft beer for our fallen comrade Togetherness. HBO officially gave the series the axe five episodes into the second season. One good thing is that the series gave Steve Zissis an avenue for wish fulfillment given that he was a once struggling actor who finally got to quit his job waiting tables once he got cast in the series. His character’s rapid upward trajectory in show business during the second season does seem like a good avenue through which someone who was very recently working in a restaurant can fulfill his fantasies. However, there’s a certain ease and natural presence with which Zissis portrays Alex. He is quite likable.  Hopefully the exposure provided by the show nabs Zissis some roles meatier than playing a Duplass character’s lifelong friend given that he’s actual lifelong friends with the Duplass brothers.

Moving on, given that Brett hooked up with the Cool Girl nose ring vinyl collector, we can all agree that he no longer has the moral upper hand when it comes to his marital detente, right? Sure, Michelle fucked another guy while married, but Brett slept with someone and then came back for seconds with cute little homemade t-shirts commemorating their Bruce Hornsby meet cute, all the while not being exactly forthcoming about the fact that he’s married. Showing up to someone’s house with presents after sleeping with someone? That’s dating, and it’s something that Michelle has no idea he’s doing.

As for Brett’s regression back to high school, Tina astutely plays Greek chorus and tells Michelle that Brett has no real incentive to stop freezing Michelle out given that it affords him more free time to live like he’s in college with Alex and fuck around with his Dune puppet musical. Unbeknownst to the sisters, it’s also affording Brett time to get some strange. Hall pass, indeed.

Tina is still on her baby craze and she’s on a quest to meet someone and get knocked up despite the fact that she doesn’t seem to either have a job or a place to live that isn’t Michelle and Brett’s couch. Although her spontaneous obsession with motherhood is a bit of a downer, Tina is still wonderfully charming with her horrified reaction to the concept of a geriatric pregnancy. In her search to find a mate, Tina learns a hard lesson with which everyone who has used an online dating site is painfully familiar. Most of the time, people on the sites use misleading pictures of themselves. While on a date with Paul Lieberstein, aka Toby from The Office, Tina found out that some dudes even Photoshop their Tinder pictures. I’ve been out with a million dudes who looked way better in their OkCupid pictures than in real life. Unlike Tina, I’ve never explicitly called a guy out on the fact that his photos were deceptively lit, but damn if she doesn’t read her date for filth. Unfortunately, Toby from The Office undermines her by claiming that she isn’t as hot as the 15-year-old picture she used and is therefore not hot enough to be “such a bitch.” That doesn’t negate the fact that he’s a beta dick, though.

Michelle and Tina show up to the party thrown at Evil Gwyneth’s large Mid-Century Modern cube of a fortress in order to find the email and call out Evil Gwyneth for her subterfuge. Although an easy way to verify that Evil Goop intentionally left Michelle off the meeting email would just be to have another attendee forward her the email, Michelle decides to go the high risk route, and break into Evil Goop’s laptop. Of course, the latter scenario calls for Tina to embarrass herself by creating a distraction, and Tina is always happy to embarrass herself, to the audience’s benefit.

Once Michelle is armed with the knowledge that Evil Goop is trying to edge her out of the charter school, she approaches EG guns blazing. Evil Gwyneth finally drops the gregarious facade and calls Michelle out for being incompetent. According to EG, her husband’s rich friends could have the school funded by the time the party breaks up.

Over at Alex’s and Brett’s shanty, Alex brokers an unlikely peace with newly sober director Dudley, who seems to be all in on their weirdo Dune musical. We also, once again, see Mark Duplass’s flaccid dick as he seduces an imaginary Cool Girl nose ring hipster in the mirror, only to leap under some furniture when he’s caught by Alex. Brett has a heart to heart with a concerned Alex over the excitement he’s feeling in regards to hooking up with a new person. Brett also throws a tantrum when Alex get offered a lucrative TV deal because it will take him away from their Dune project. Given that there are two episodes left in the rest of the series, that means there’s an opportunity for Brett to redeem himself right? There’s gotta be something appealing about this guy, because right now he’s a self-absorbed glorified teenager. 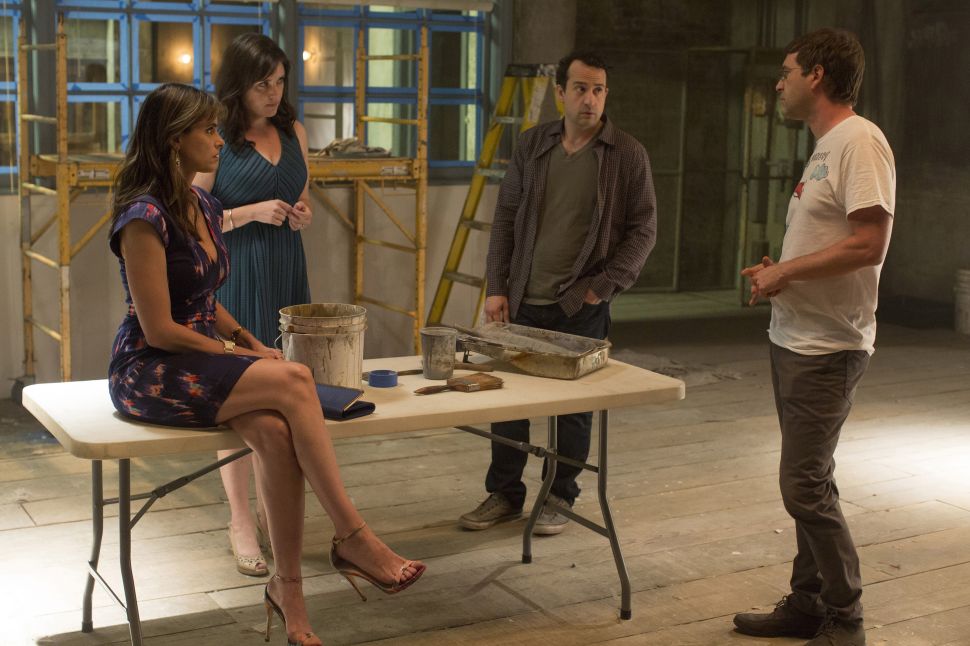