An affiliate of the Armory Show, the more adventurous Volta art fair offers curated solo presentations by emerging and under-the-radar artists from around the world. Presenting a hundred art galleries, not-for-profits and artist-run spaces from fifty cities across four continents, the ninth edition of Volta NY returns to Pier 90 for a second consecutive year with a fresh look and revitalized programming from March 2 through 6.

Upon entering Pier 90, visitors are welcomed by a 30-foot media wall with a rotating program of single-channel videos by artists represented by the fair exhibitors. Once past the reception area, the layout of the fair is much more dynamic this year—with the usual sightlines of an endless corridor broken up by a new arrangement of the exhibitors’ booths and cafés and a lighter rug and fewer covered windows to make the fair appear less cavernous.

The focus at Volta has always been more on the art and less about the dealers, as witnessed by the signage for the booths, which lists the artist’s name first and the gallery second. And, in regard to the artists, one of the most important features of the fair is the ethnic diversity of the art makers and the variety of styles of the artwork on view.

“We’ve been working on the diversity of the fair for at least four years, which is when I moved to the Caribbean,” said Amanda Coulson, Volta artistic director and director of the National Art Gallery of the Bahamas. “What we consider the center for art making has shifted. We’ve been pushing that a lot, but every year it’s getting more diverse and more interesting. We’re in this city, which is supposedly the melting pot, but actually most of the fairs are mono-cultured. We want to create something that reflects the city. A number of exhibitors that were at Volta last year are showing work in the ‘African Perspectives’ section of the Armory Show this year, which means we’re spotting things and they’re moving along.”

The most significant trend that we spotted at the 2016 edition of the fair was realism, with Israeli artist Yigal Ozeri on the top of our diverse list.

Mr. Ozeri is exhibiting a series of new hyper-realistic oil paintings titled Monochrome, which offers varied views of actress and filmmaker Olya Zueva alone in a landscape, at Munich’ s Galerie Andreas Binder. Rendered in shades of gray, the paintings are inspired by Ms. Zueva’s own black-and-white silent films. Admired for his exquisite portraits of young women in idyllic settings, Mr. Ozeri captures an enigmatic vision of the Russian actress, one in which she looks as though she just stepped out of a French film noir classic.

At Barcelona’s Galeria Senda, the Cuban-American artist Anthony Goicolea realistically draws and paints the male figure on two sides of Mylar in black and white and then obliterates key areas of the subject with white paint to suggest architectural forms that interact with the body. Also exploring a palette of gray tones at New York’s Y Gallery, Peruvian conceptual artist Miguel Aguirre reproduces small life-like portraits of members of the American Abstract Expressionist movement—including Jackson Pollock, Mark Rothko and Joan Mitchell—on zinc plates, and has the famous Life magazine photograph of the group rendered as a woven rug to reference the little-discussed influence of Latin American culture on the movement.

Highlighting social concerns in America, the fair’s first curated exhibition—Something I Can Feel, which was organized by artist Derrick Adams—brings together a diverse group of eight artists that deal with the body and urban environment as sites of tension and provocation. Presented in the center of the fair (the belly of the beast) in a space that’s carpeted bright pink, the works in the show range from Shaun Leonardo’s realistic renderings of wrestlers and boxers in the ring and Kate Clark’s surreal sculptures of animals with human faces to Brandon Coley Cox’s abstract accumulations of detritus from city streets.

“I wanted to create a conversation about contemporary culture and what’s going on socially and politically and how that gets mingled with art,” Derrick Adams told us at the opening. “I wanted the exhibition to have a certain existential feel to it, where visitors could feel the materiality of the work or get a sense of material as a cultural metaphor, but I was also thinking about a non-linear representation of issues of the body, race and class and ways that people could have a relationship with the work on various levels. Because it is a commercial structure, I also wanted artists to be able to benefit from what happens at an art fair.” 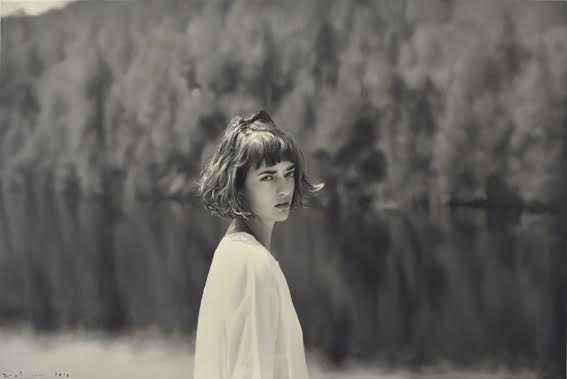