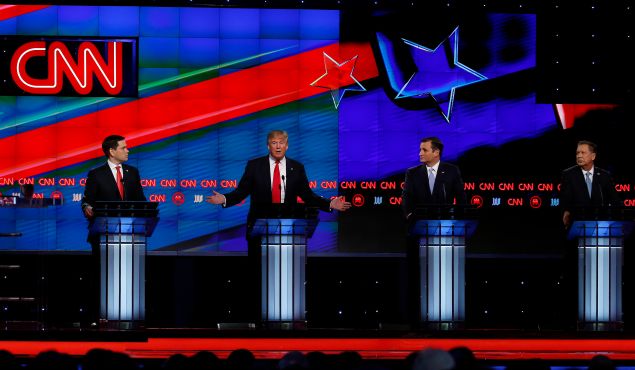 Remember, not too long ago, when I was saying we were one-third of the way through the debates, or half-way through or three-quarters o the way through? If nothing had changed, that mean this would have been the last GOP debate, and we could have all gone back to our regularly scheduled lives.

But no, the Republican National Committee added more debates, so things are not over. One of these days I might get a full night’s sleep, but the RNC thus far has said: “No, Ashe, a few hours of sleep a night is fine for you. What? You’re getting tired? GET BACK TO WORK THERE’S ANOTHER DEBATE.”

So here we are, so let’s at least see where each candidate did well and where they did poorly.

Where he floundered: He sort of tripped over himself when defending his past positive statements about world dictators.

But it’s hard to imagine anyone saying the Chinese government showed tremendous “strength” during the Tiananmen Square protests without speaking positively of the government. And calling the peaceful, iconic protests a “riot,” further harms his case that he was not endorsing the government’s actions.

He also failed to effectively condemn the recent spate of violence at some of his rallies, claiming the protesters have been violent, despite no evidence of this.

“People come with tremendous passion and love for the country, and when they see protest—in some cases—you know, you’re mentioning one case, which I haven’t seen, I heard about it, which I don’t like,” Mr. Trump said. “But when they see what’s going on in this country, they have anger that’s unbelievable. They have anger.”

Where he excelled: Mr. Trump appeared calm in this debate, a trait lacking in the past few. Granted, a lot of his bombastic comebacks were the result of attacks from Florida Sen. Marco Rubio and Texas Sen. Ted Cruz, but since the attacks weren’t as sharp as in previous debates, Mr. Trump was able to show that he is not always so caustic.

Where he floundered: Mr. Cruz is starting to sound like a broken record when he keeps pointing out that Mr. Trump donated to former Secretary of State Hillary Clinton (who is also running for president) and current SoS John Kerry. I get that most people haven’t been watching every debate (you lucky bastards), but at this point, the attack hasn’t worked to bring Mr. Trump down, so it’s clear it isn’t going to work.

Where he excelled: His common core/school choice answer will really resonate with Republicans.

“Now, let me tell you why you can do that, because it’s easy to talk about the problem, but you have to understand the solutions,” Mr. Cruz said. “The Obama administration has abused executive power in forcing common core on the states. It has used race-to-the-top funds to effectively blackmail and force the states to adopt common core.”

He also had a great answer about standing up to the “Washington Establishment,” compared to Mr. Trump funding the “Establishment.”

“It’s easy to have language: ‘I’m fed up with the corruption in Washington,’” Mr. Cruz said. “But if you have a candidate who has been funding liberal Democrats and funding the Washington establishment, it’s very hard to imagine how suddenly this candidate is going to take on Washington.”

Mr. Cruz also gave an effective answer to a question about Mr. Trump asking his supporters to raise their right hands and pledge their support to him.

“This is a job interview. We are here pledging our support to you, not the other way around,” Mr. Cruz said.

Where he floundered: Has he figured out his campaign is fruitless at this point? Because his opening statement wasn’t bold, it wasn’t new, it was the same thing he’s said in every debate and every stump speech. Definitely not going to win him any points.

Questions about the Veteran’s Affairs scandal have been sadly missing from this election, so it was good to see multiple questions about the issue Thursday night, and Mr. Rubio had one of the best answers on the situation facing veteran’s in America.
“When I’m president of the United States, if you work at the V.A. and you are not doing a good job, you will be fired from your job at the V.A.,” Mr. Rubio said.

No one on the stage had a better answer about Cuba than Mr. Rubio.

“There has not been a single democratic opening; not a single change on the island in human rights. In fact, things are worse than they were before this opening,” Mr. Rubio said. “The only thing that’s changed as a result of this opening is that now the Cuban government has more sources of money from which to build out their repressive apparatus and maintain themselves there permanently.”

“There’s never been a time when the climate has not changed. I think the fundamental question for a policy maker is, is the climate changing because of something we are doing and if so, is there a law you can pass to fix it?” Mr. Rubio said, before adding that none of the proposals floating around Congress would fix the problem, but they would destroy the U.S. economy.

Where he floundered: Mr. Kasich needs at least 85 percent of the remaining delegates in order to secure the nomination. Nothing he says tonight is going to fix that. To the 12 Kasich fans out there, I’m sorry, but he’s just not the nominee.

Where he excelled: His only usefulness for staying in at this point is may be to take Ohio away from Mr. Trump. He can’t win the nomination, and even in a contested convention, he has no chance of being the alternative nominee. I’ve said it before and I’ll say it yet again, regardless of how many Kasich fans get upset—he won’t be president. Therefore it doesn’t matter where he does well, he’s just taking up space. 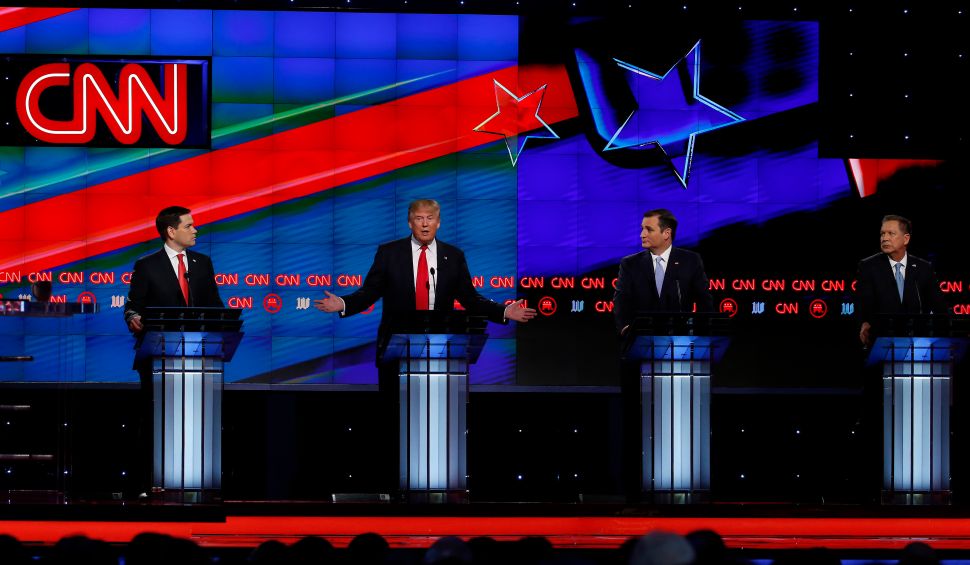