Model, actress and beautiful blonde Margot Robbie recently made a rather disastrous faux pas, which she admitted under great duress from Jimmy Fallon. While attending a holiday party hosted by her friend Suki Waterhouse, she couldn’t quite figure out who the familiar-looking redheaded gentleman she spotted was. When Mr. Fallon (rightly) suggested she should recognize Prince Harry, her response was, “He’s not wearing a crown, I don’t know he’s a Prince,” proving she’s the one woman in the world who isn’t hoping to be chosen as his future princess.

After Prince Harry donned joke glasses reminiscent of Kanye’s shutter shades from before he was fashion famous, Ms. Robbie joked, “Ohmigod, I didn’t know Ed Sheeran was at the party!” and “he got really offended.” For others who might have trouble differentiating between the two famous ginger Brits, here’s a helpful guide. (And, for the record, neither man is Rupert Grint).

Mr. Sheeran is the one with the tattoo(s).

While both men have glorious red hair, Mr. Sheeran is the only one with a red-headed creature permanently tattooed on his chest (and no, he assured everyone, it is not an elaborate prank). While there are unsubstantiated rumors Prince Harry has a tattoo, the world can rest assured knowing it is not an enormous circus animal.

Both men are currently traveling for spring break.

Prince Harry is heading to Nepal this spring to aid earthquake victims, while Mr. Sheeran is taking a social media hiatus to “travel the world.”

Only one is perennially friend zoned.

While Prince Harry is rumored to be dating a wide variety of women, Mr. Sheeran tends to be spotted with his best buds, including Taylor Swift, who was elated when he won a Grammy. (In fact, she was so excited that some people thought she won.)

The other one is a prince.

Even if he’s not wearing a crown to prove it. 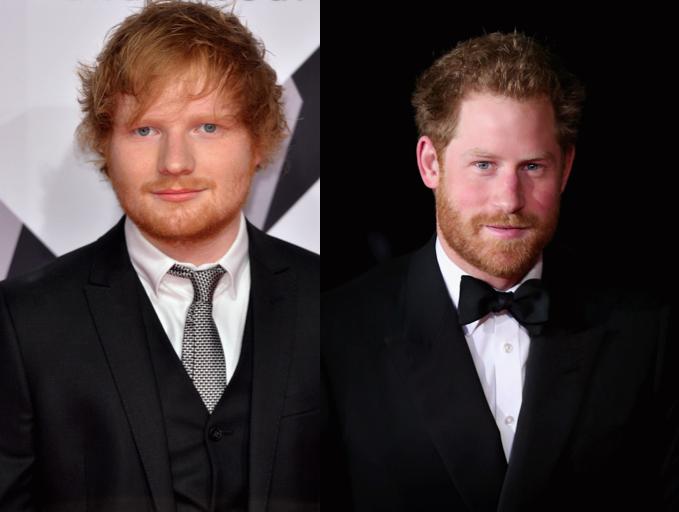