Once again, Russia is upping the ante in the power game they are playing in the Middle East.

Russians have deployed a fleet of submarines off the coast of Syria. And not just any subs. These are the quietest subs in the world. NATO has termed these Russian subs “Black Hole.” They are diesel electric powered and fire Tomahawk-style rockets from the sea.

The subs are also known as Rostov -on- Don and the Russians have already used them against ISIS and al Qaeda. Russian Defense Minister Sergei Shoigu with Russia President Vladimir Putin recently held a televised meeting and broadcast footage of the submarines striking at ISIS targets.

One of the secret weapons of great powers is their submarine fleet. Very little time is spent analyzing the power and strength of these underwater vessels, but conventional wisdom has it that the greater the submarines fleet the more powerful the navy. This explains why the actual size of almost every nation’s submarine fleets is a top secret, and the best analysts can do is speculate as to the numbers involved. An advanced sub fleet can and will be much more powerful than any aircraft carrier.

In other words—the greater the sub fleet, the more powerful the military. And if a set of subs can go undetected for weeks at a time, the weapon becomes enormously effective both as a defensive and offensive weapon.

This Russian sub can remain submerged for 45 days. Weighing in at 4,000 tons, it is very small and very fast and can cruise at an underwater speed of 20 knots. Because of its small size, it is able to get into shallow . Because it is so quiet, it leaves no sound signature. It becomes invisible.

“Black Hole” is one of Russia’s secret weapons, and it is now taking up residence just off the coast of Syria, Lebanon, Turkey and Israel.

How many are there? Best intel guesses say that Russia has 20 “Black Holes.” There are probably six of seven of these subs now submerged in the Mediterranean Sea.

They are not alone. Other subs in the area are there courtesy of the United States, England, Germany and France. Israel has submarines in the Mediterranean too. The others come and go at will. But for Israel this area is home.

Last year Iran brought one of its subs through the Suez Canal and up the Mediterranean Coastline to Syria. The sub was escorted by a naval vessel, and they cruised right by Israel to Syria. Once it reached its destination, the ship spun around and returned to Iran. To this day analysts have been searching for that Iranian sub. It is assumed that the Iranian sub returned to port, but no one knows for sure. We do know that it was the first time in decades that Iran had a naval presence in the Mediterranean Sea.

They are not as highly developed as the “Black Hole,” but Israel does have five or six (again, it’s top secret and classified and no one knows for sure) dolphin class, diesel-powered, subs that have been specially redesigned and outfitted with the ability to fire Tomahawks as well as “other weapons.”

Each of those subs, it is believed, is equipped with a 200 kilo nuclear missile containing six kilos of plutonium. This is known as a second strike weapon. In the event that Iran or some other country was to strike Israel, the nukes would be unleashed against the attacker.

It is safe to assume that, because of the threats facing Israel from her many enemies, all of her subs are not onshore, but rather, they are moving in and around the waters of potential attackers. Given the new tensions in the region and the presence of Russian subs in the region, Israel has probably relocated several subs closer to home. The Israeli subs are likely tracking the Russian subs in a dangerous game of underwater cat and mouse.

The airspace above Syria is also very crowded. There are air forces from 14 countries bumping shoulders in the sky. Russia has exercised control over the airspace with its anti-air missile program, and it controls the sky patrols thru an AWACS type plane. At this point, any country that wants to fly above Syria—and they all do—must get clearance from Russia.

Russia wants to do in the sea what they are doing in the air. And they want to do it through intimidation.

With their submarine presence now powerfully established off the coast of Syria, Russia has created what has been termed an Arc of Steel. The arc goes from the Arctic Circle through the Baltic Sea to Crimea to the Mediterranean Sea. The game plan is to challenge and confront NATO and the West. In this game, the Middle East is just one connecting link in a chain of naval influence, power and intimidation. 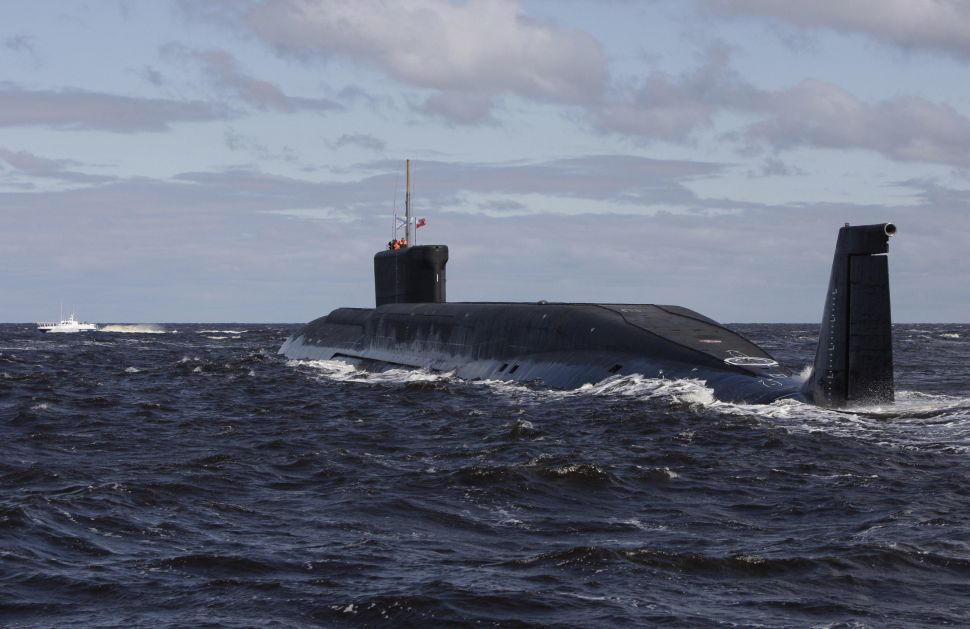