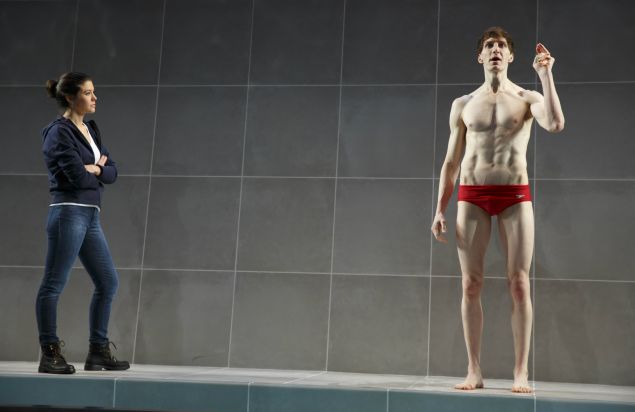 Plays about sports are rare (and rarely successful). But this week there are two new ones, both worth investigating. Red Speedo, the more exciting and riveting of the pair, holds a magnifying glass to the use of performance-enhancing hormone drugs in Olympic swimming competitions, at the prolific New York Theatre Workshop. The Royale, at the Mitzi Newhouse Theater in Lincoln Center, is a sparse but elegantly staged fictionalization of the events leading up to and including the infamous night of Dec. 26, 1908, in Sydney, Australia, when boxer Jack Johnson defeated white opponent Tommy Burns to become the first black heavyweight champion of the world—a title that made him famous and ruined his life at the same time.

In Red Speedo, an imaginative set by Riccardo Hernandez depicts an antiseptic gymnasium replete with locker room and what looks like an Olympic-sized pool, in which tall, lanky, scarecrow-skinny actor Alex Breaux swims the length throughout the evening, clad only in a red Speedo. With thrilling shifts of sweetness, affection, desperation and violence brimming just below the surface, he plays Ray, a poor boy who has spent his life dreaming of joining the U.S. Olympic swimming team. The play, which runs 80 minutes with no intermission, shows what swimmers go through to survive: the same kind of intense physical and emotional dedication to the sport of swimming that ballet dancers devote to the art of dance. He’s a swimming machine. Unfortunately, without the awareness of either his greedy, self-serving older brother Peter (Lucas Caleb Rooney), a lawyer who has become his manager or his hard-driving coach (the excellent Peter Jay Fernandez), Ray has been taking strength-enhancing illegal drugs that fuel his power in the pool and his dwindling self-confidence on dry land.

Ray can’t function in the real world because he’s dumb as a fence post and can’t do anything but swim. He’s never held down a job, he has no education, nowhere to live and no future. Sometimes he sleeps in his car. All he’s got is the hope of becoming a champion swimmer. If he can just make it to the Olympics, he’ll get a promised Speedo contract and finally be somebody. He’s also anguished over the loss of his girlfriend Lydia (Zoe Winters), a massage therapist who was arrested for providing a sick friend with life-saving drugs, thanks to the jealous interference of brother Peter. With the Speedo endorsement, Ray thinks he can get her back, save enough money to get out of sports and settle down into a “normal” married life. His brother’s reputation, his career, self-respect, his future with his girl—everything depends on Speedo! The play, economically written by Lucas Heath and soundly directed by Lileana Blain-Cruz, evenly chronicles the ups and downs, triumph and pain, growth and sacrifice a boy like Ray goes through to survive.

Munching carrot sticks, his body shaved for faster movement in the water and his back totally covered with the tattoo of a grotesque, ink-black symbol of a coiled serpent designed to wow the press, Alex Breaux literally becomes immersed in the role of Ray. He proves an athlete is like a film star—everyone wants a piece. Ray also needs to borrow $5,000 to buy enough drugs to get him through the Olympic swimming finals without getting caught. When his brother Peter, panicked that he’s losing control over his meal ticket, offers the coach a bribe to keep his dependence a secret and Ray’s fate is torn between them, an integrity he never knew he had surfaces, and Red Speedo escalates into a finale furioso so shocking and unpredictable that it leaves the audience audibly shaken.

Less emotionally compelling, Marco Ramirez’s The Royale is all about the staging. The sordid, tragic life of fighter Jack Johnson, changed to Jay Jackson for this occasion, has been better told in the acclaimed stage and film versions of The Great White Hope, which catapulted the career of James Earl Jones to full-fledged stardom. You won’t learn anything new from The Royale, including the dark facts that made up the most interesting parts of his life (the race riots and lynchings that followed his championship bout in 1908, the suicide of the white woman he served prison time for carrying across state lines in defiance of the Mann Act, the successful efforts of the press and the boxing commission to ban him from the ring and discover a new “great white hope” to defeat his championship title). But you do see a fascinating example of how to turn stale, familiar material into fresh dramaturgy.

The pace is timed by the actors clapping hands in staccato rhythms. Frozen in mid-round, the actual fight scenes are discussed, not shown. We are told 70,000 people listened to the radio broadcast of the “fight of the century” in 39 states, but his opponent, Tommy Burns, who is called Bernard Bixby in the play, makes no appearance. The racist threats of the day are described in the anxiety and fear of his sister Nina (a lovely Montego Glover), who visits Jay backstage before the championship bout to warn him of the repercussions if he wins. The Royale of the title is an old fight his trainer once entered blindfolded in the days before high-stakes purses and the existence rules. If you won, the blindfold was removed, and you only had a few minutes to gather up as many coins as you could fit in your pockets—including the broken teeth of your opponents. The description has nothing to do with the rest of the play except to show, in the trainer’s own words, that in the fight racket there are a “lotta ways to bring a man down—and they ain’t all in the ring.”

Ponderous and talky, The Royale is not unforgettable like The Great White Hope, but John Lavelle makes a terrifically bombastic contribution as Jay’s manager and fight promoter, Khris Davis is a human juggernaut in the leading role, and you can’t fault the stomping, hand-clapping direction by Rachel Chavkin. 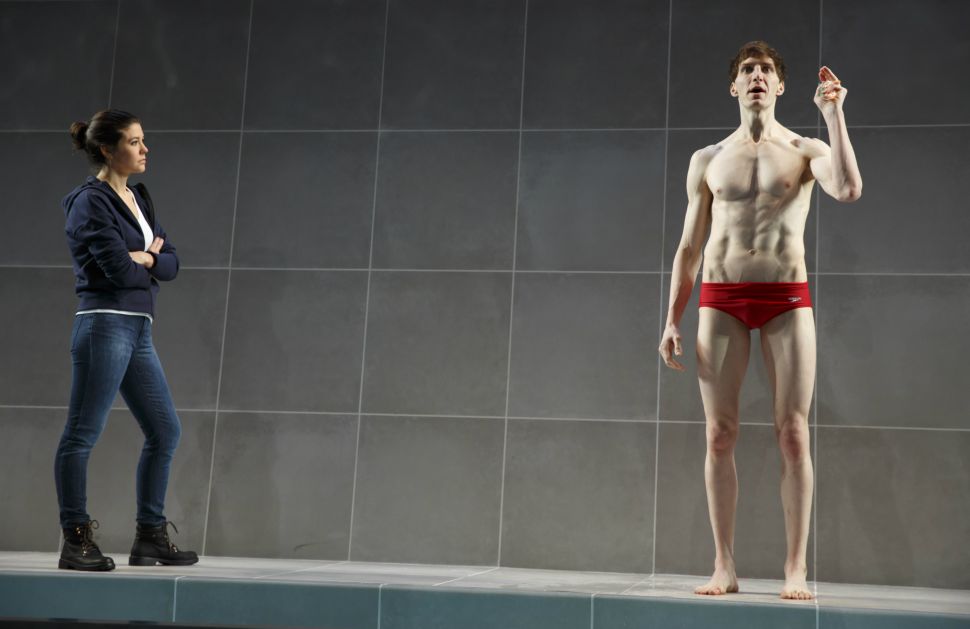