Let me start off this Vinyl review with a question I don’t think I’ve ever asked before: Am I taking it up the ass every Sunday?

Wait, I should probably back up.

I struggle, week to week, to put into words a reason why I enjoy Vinyl, mostly because I really don’t think there is a tangible reason–almost like the way everyone on this show keeps insisting the Nasty Bits are a serviceable band, even though the auditory evidence proves otherwise. There’s just something there. That’s not an easy position to defend when the week one reviews added up to a resounding “meh” so loud it could drown out a basement show cranked up to 11. It got harder when the texts came in week two, and week three, “I think Vinyl just lost me?” Was it the strange Alice Cooper subplot? Was it the fact James Jagger’s Kip Stevens is every punk legend rolled into a sentient leather jacket? WAS IT DONNY OSMOND? Didn’t matter. I was still on board…

…until this week. Until “The Racket,” which didn’t sparkle, didn’t pop, which had as much substance as funk-star Hannibal (played by an admittedly high-energy Daniel J. Watts) thrusting out his red-leather clad crotch on stage and belting “Lady, let’s make a baby.” And I know exactly why, too. The high this show brought was pure rock-and-roll, that mixture of life-envy and escapism you get from a grainy Youtube video of Robert Plant slithering across the MSG in a belly shirt. That’s fun. That’s sex. That is something you never want to see the business side of.

“Racket” showed us exactly that side–the contracts behind the car wrecks. Hannibal, the Nasty Bits, and Lester Grimes came together in the chaotic American Century offices, where Richie Finestra planned to schmooze, booze, and ultimately sign all of them. Lester, at least, sees straight through the smiles and drinks offered. He tells the Nasty Bits as much: “You know the difference between mechanical royalties, performance royalties, artist royalties, songwriting royalties…Richie Finestra is going to hand you a drink and a pen, and he knows that every single one of those things is negotiable down to a hundredth of a percent.”

Those of us still on board with Vinyl could use a Lester Grimes, because we fell for the booze and the lifestyle and the promises of something great, ignoring the fine print (the fine print being here a general lack of substance to the story, or for Devon Finestra to do with her screen-time). Vinyl beamed, put its arm around us, and told us to ignore the garbage fire happening behind the desk.

Or, as Ato Essandoh puts it so eloquently in the gruff, ruined voice of Lester: “Welcome to American Century. Get ready to take it up the ass.”

Money, get back
I’m all right, Jack, keep your hands off of my stack.
Money, it’s a hit
Don’t give me that do goody good bullshit
-Pink Floyd, “Money“

What I did love about “The Racket” is how well it illustrated how much of a shitshow American Century is, and how terrible a decision it was by Richie to cancel the deal with Polygram. I mean, how long can a company rest on the back of a surplus of Donny Osmond albums and the wonderfully-mustachioed sounds of Robert Goulet Christmas albums before it collapses for good?

Adding weight to that uneven balance is Hannibal, an undeniably cool possible client for Richie that is being tugged away by Ken Marino’s Jackie Jarvis. I say undeniably cool because episode director S.J. Clarkson shoots Hannibal’s concert like a goddamn event, all glitter, gold, and ecstasy. But even off the wagon again, Richie seems lost in that world, or maybe just exhausted. It remains to be seen how long cocaine can fuel a captain when he’s steering a sinking ship by himself.

It does, however, look like Richie re-hired an old first mate. Lester is back in American Century, not as an artist–his old demo tapes went down in flames faster than a led zeppelin–but as the Nasty Bits’ manager. He gets Kip Stevens and…the others(?)…$20,000 up front and some of Richie’s trust, a deal that heals exactly zero percent of the shit Richie put Lester through in the past. But it’s a start, at least, something a fresh-voiced Lester never got himself. But maybe now the Nasty Bits will make a little money as they single-handedly pioneer punk rock through shitty guitar work and a vague grudge against some sort of authority (at least according to Vinyl. I’ll leave that to Mr. Sommer). And hey, DJ Kool Herc is still hanging in Lester’s neighborhood, waiting to invent hip-hop.

“You never stop hustling, do you?” Richie asks Lester at the end of their meeting, probably too high and beat to realize he could be talking to himself.

You got a woman waiting for you there,
All you ever gotta do is be a good man one time to one woman
And that’ll be the end of the road, babe
-Janis Joplin, “Cry Baby“

Before Vinyl premiered, Olivia Wilde told The Guardian:  “I was like, ‘Well, if you want me to play the long-suffering housewife, then you need to go to someone else.’ They laughed and went, ‘No, no, just you wait. [Devon is] really fascinating.’”

Okay, fair. But I am still waiting. Four episodes–which to be fair do include a super-sized two-hour pilot–isn’t a whole ton to judge a character by. But Devon Finestra so far has existed to serve as the proverbial pillow being beaten repeatedly with a tennis racket without fighting back. Richie didn’t tell her about canceling the Polygram merger. He took for granted the fact she accepted him again after relapsing into drugs and alcohol. Even the damn divorce lawyer dismisses her with one of the coldest fuck-offs in recent memory: “You just wasted an hour of my time generating a new card to play in the next fight with your husband.”

But how right is she, and how genuine is Devon’s attempts at separation? Richie barely hears her when she brings it up on the phone, and her steel resolve lasts just long enough to look forlorn when she hands up herself. But her final moments, those desperate, cathartic wacks at the window with a frying pan, are–I hope–a sharp left turn for Devon.

You would think that this week’s entry into Vinyl‘s always beautifully done musical interludes–a faux-Janis-Joplin belting “Cry Baby”–would have its finger pointed directly at Devon. But, hopefully, Devon’s crying is over. She was a fucking Warhol muse. Leave the crying for the cameras.

Wine is red
Poison is blue
Strychnine is good
For what’s ailin’ you, wow
-The Sonics, “Strychnine“

And you know what the bullshit is? I didn’t love “The Racket,” wasn’t enthralled or even intrigued, for the most part. Then Richie walked down a flight of stairs into a dive-y jazz bar, fresh off a visit from two homicide detectives looking for answers, to watch an older man play the hell out of a horn. That man turns out to be Sal Finestra, Richie’s father, and their reunion is anything but warm. “I’ve come home, papa,” Sal mocks. “Hold me, papa.”

“I need an alibi,” Richie answers, blunt as a bass note.

And fuck me if I won’t be there next week, pen in hand, ready to sign on Vinyl‘s dotted line. Because maybe the fine print isn’t the point. HBO is filled with shows that are all fine print; say, Togetherness, or Girls. Vinyl offers something else–a bottle of champagne, a friendly smile, and a brilliant but fleeting notion that you’re on top of the world, no matter how false that notion may be. 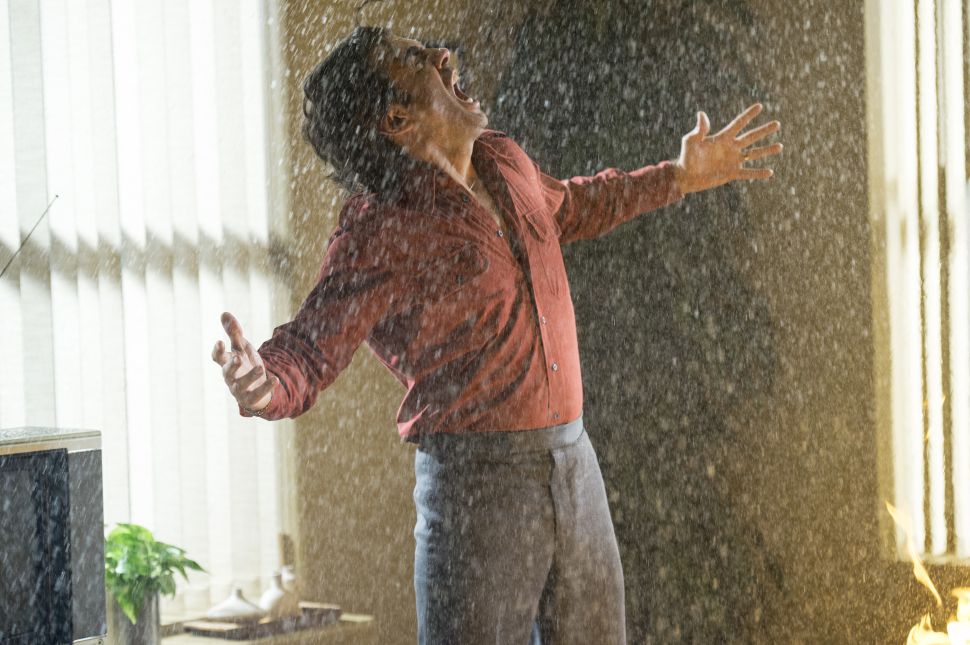