My name is Sanni Oluwatoyin Yetunde and I am a software developer at Andela.

My journey into the programming world was inspired by a deep interest and thirst to solve the traffic problems in my country, precisely Lagos, Nigeria. In my career as a developer, I’ve worked with great minds to solve many problems, spoken at a tech conference, acted as a Code instructor at different code camps which include partnering with Africa Code Week, Rails Girls and mostly I’ve participated at Hackathons all within a year since I started writing code.

This last fact shouldn’t be unique or surprising, but more often than not, it is. Back in the university where I studied Computer Science, I was one of the few girls in a very large class. That’s when I first felt that I was indeed one of a few in a predominantly male environment.

As far as being a woman in a male environment is concerned, I personally don’t think about it much. I like talking about the Internet, technology and programming languages. I live and breathe code. Ultimately, it doesn’t matter to me if the ratio of men to women at my workplace is low. What I care about is working with nice people who are passionate about their work, and getting equal respect and consideration, just as any other person on the team.

It saddens me to think that some women in tech have felt discriminated against or witnessed sexual harassment in the workplace. But if you’re a woman and you want to work in tech, I wouldn’t let stories about a “brogrammer” culture deter you. Instead, focus on your craft, because your skills will speak louder than your gender.

I do believe that events and organizations focused on “women in tech” can be valuable in bringing more women into our industry. For starters, there’s a special way of networking since women can help individuals face challenges and share common experiences. Meet-ups for women in tech help broadcast empowering messages and views of women in the tech world. However, I feel that pushing the concept of “women in tech” too hard can be detrimental, as doing so, we are highlighting the possibility that this industry is really tough for women. It’s a fine balance.

Overall, to become a female developer, you only have to do what any other smart dev would do. Spend weekends and late nights in front of your computer, laying down lines of code, debugging and developing your personal projects. Follow tutorials, read articles, and learn on the fly. Master the lingo. And, if you are curious enough to go deep down to the core of what you are trying to build, you will need to acquire a large and useful understanding of computer science. In a nutshell, spend time to learn all you can.

One of the things I love most about programming is that it allows you to build things on your own. They can be rather ambitious tasks, or simple and amusing ones. The job itself requires a lot of dedication and precision, and you need to be highly motivated. But it’s incredibly rewarding.

Yes, I forgot to mention the journey hasn’t been smooth. Determination, hard work and a resilient spirit among other things are key factors. Just like a good friend of mine says, “I see my life right now as a cup of from a big ocean.” I’m just starting. I can take on any challenge I want, and my gender does not define me. I respect my coworkers — and they respect me in return.

Referring back to what caught my interest in programming, my first approach at solving the traffic problem was building an application where users post updates of their current position in traffic and other users can get to see it ahead of time to avoid the traffic. In the nearest future, I plan to bring in Artificial Intelligence to make the system more effective and efficient.

To every aspiring female developer out there, I leave you with this: You can be whoever you want to be. Do not let the world define you. If you really have the passion, are true to yourself and remain committed to your beliefs, it will turn out that even in the most difficult situations, you’ll discover within you a capacity to create a solution.

Yetunde Sanni joined Andela, a company that pairs top developers in Africa with tech companies worldwide, in February of 2015. She currently works as a full-stack developer at a fast-growing startup and blogs about tech, programming, and artificial intelligence at techinpink.com with fellow Andela developer Gertrude Nyenyeshi 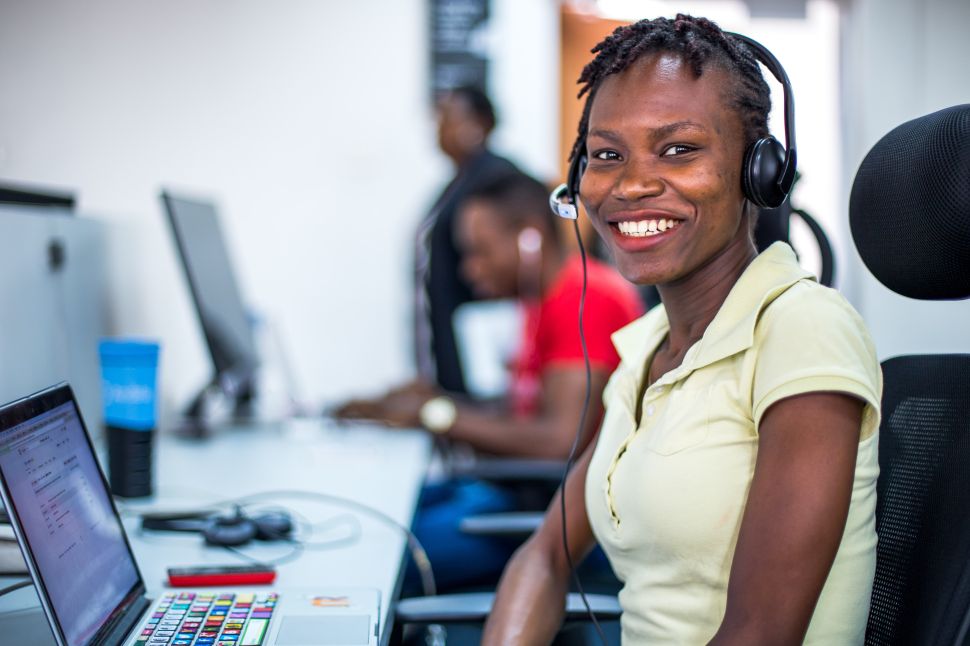