Five days ago I started watching Amazon’s Mad Dogs, because my editor told me it is a show I’d “be into.” I’m still processing what exactly this means about my boss’ opinions of me both professionally and personally, but that’s not what we’re here to discuss.

Last Sunday, Deadline reported Mad Dogs had been cancelled by Amazon, and the series’ creator Shawn Ryan took to Twitter to say “Mad Dogs was originally intended to be a closed 10 episode limited series…Amazon didn’t want to make that story and we didn’t want to make the kind of story they wanted us to make.” Yikes-a-doodles. But still, I finished the 10-episode season because I was halfway through at that point and you don’t just stop watching a show that starts with a cat murdering Billy Zane (wait, what??). Just, hold on. I’ll explain. Or, I’ll try to explain. I’ll honestly try. Because now that I’ve finished the first and only season of Mad Dogs, I kind of only have one question.

What the fuck was Mad Dogs?

Hold on! Don’t take that as a condemnation of Mad Dogs. It’s not the kind of “wtf?” I’d give to something like, say, The Big Bang Theory, where I genuinely can’t figure out what sadomasochistic monster would subject themselves to an entire half hour of that show, much less why there’s so many of them. No, this is like a Wayward Pines-level “wtf?” where I (think) I enjoyed a large part of it, but simultaneously–and super genuinely–wasn’t really sure what was happening in front of me. I can’t 100 percent nail what genre Mad Dogs is. I can’t define its tone. I can’t confirm Mad Dogs is even a TV show. Dude, I can in no way verify that from Monday to today I wasn’t experiencing a hallucinatory fever dream in which Amazon original series Mad Dogs existed, and I watched it.

But I can try. I present to you a conversation, with myself, in which I attempt to solve the brief, perplexing enigma that was Amazon’s Mad Dogs.

Sooo there is a story, right?

There’s a long, long set-up where all five friends looking for 40-something guy fun (see: awkward dancing, cargo shorts) hit the Belize nightlife, and in their revelry, we get hints that these men have secrets. Joel used to date Cobi’s wife and is probably still in love with her. Gus was dis-barred months ago. Lex turned to drugs because his life spiraled downward after Gus wrote him a shitty letter of recommendation.

Also, Milo is only massively successful because he’s deeply involved with the Belize drug trade, but in Belize that’s just called “doing business.”

Ehh, not really. It’s definitely super-serious at times, and there’s a lot of scenes where one man-bro screams at another man-bro “We were supposed to be friends!” But, I mean, Steve Zahn is there and that dude was in Saving Silverman. And there’s this constant sense of absurdism, where even when the show gets violent (and it DOES get violent), it’s like Tarantino-violence that is so extreme it’s actually pretty funny.

So it’s a comedy?

Ehhhhh, not really. Because, like I said, there’s a lot of serious stuff in here. Murder, drug cartels, corruption, the fact that you probably hate everyone from your high school that for some reason you still hang out with.

Ehhhhhhhhhhhh, not really. Because dark comedy is like the melding together of comedy and drama, right? But Mad Dogs doesn’t really ever meld the two together, it just puts them side-by-side over and over again. Like, the four main characters will have a 15-minute long conversation about the time five years ago Gus drove Lex into a world of addiction and self-hatred, and then the next scene is Cobi drinking too many Cokes. Comedy and drama for Mad Dogs are like oil and , not mixing but awkwardly floating on top of each other in a container.

Jeez, okay, sorry. So, what happens in the rest of the series?

Milo, thinking he’s tough just because he’s rich and played by Billy Zane, “shows some muscle” by stealing a man named Jesus’ boat and leaving it in a random lagoon. Unfortunately, Jesus is like king-shit of Belize and sends a tiny man to shoot Milo in the head in front of all his friends. The tiny man gives the remaining four men 24 hours to return the boat, and off we go into crazy-country.

Also, the tiny man is wearing this terrifying cat mask.

Holy shit, that is horrifying. So we’re dealing with some surreal Lynchian horror here?

Like, sometimes? Yeah, definitely the scene up there, but the cat-guy comes back to the house later, long after the 24-hour deadline is over, and has a pretty slapstick-y fight with the guys very reminiscent of the Mini Me scenes from Austin Powers. It ends with them tying the cat to a chair and dropping him down a well.

We actually do come across a young conjoined twin with two heads at one point. They’re pretty cute, though.

…Jesus. So what happens after Milo gets shot in the head?

Evvvverything? No, yeah, every bad thing possible happens. The quartet becomes embroiled in this huge thing involving Belize’s drug enterprise, but it also involves a deeply corrupt police force that is separate from the drug enterprise. Basically, according to Mad Dogs the only thing not corrupt in Belize is the iguana, and even them I’m like “Ehhhh I don’t know.” In the course of trying to get out of the country, the group is mistakenly given $15 million in drug money. Passports are lost. Trees are driven into. Allison Tolman from Fargo shows up as an American embassy employee capable of saving them, but then she falls off a cliff trying to pee in the jungle.

She comes back though. She landed on sand.

It settles into a groove eventually, right?

Um, around episode 7, aka 70 percent of the way through the season, that is when Mad Dogs introduces the idea of a mutated version of smallpox, and the Lex, Gus, Joel and Cobi are thrown into quarantine. So, no, it never stops being disorienting.

Eventually my version of watching Mad Dogs devolved into looking at something else and switching back to the screen anytime something batshit crazy happened. Oh, look, a man in a tracksuit just slit a chihuahua’s throat. Oh, my, the cat dwarf was just shot in the face with an arrow. Wait, is that the guy from Monk?

So, basically, you’re telling me not to watch Mad Dogs?

What baffled me about Mad Dogs is also the reason I kind of….no, I really, really liked it. Besides some awkward moments in the pilot, it never has that feeling that many streaming originals have, where the creators see the part in the contract where it says they’re allowed to say “fuck” and take full advantage of it like a college freshman living away from home for the first time (looking at you, 11.22.63).

Mad Dogs takes the creator-driven model of streaming in the right direction because it truly feels like a creator set loose. It’s madness not just for madness’ sake. In a world where both critics and viewers alike practically stampede over each other to declare a show “art” and “genius” or whatever, sometimes it’s easy to forget that first and foremost, a show should entertain. For all intents and purposes, Mad Dogs is a bit of a wreck. But hey, half the time you’re stuck in traffic it’s because we all can’t help but slow down and look at the wreck.

What should I take away from all this?

1) Go take a bunch of Belizean drugs and watch Mad Dogs 2) Don’t ever actually go to Belize 3) Don’t be friends with Billy Zane. 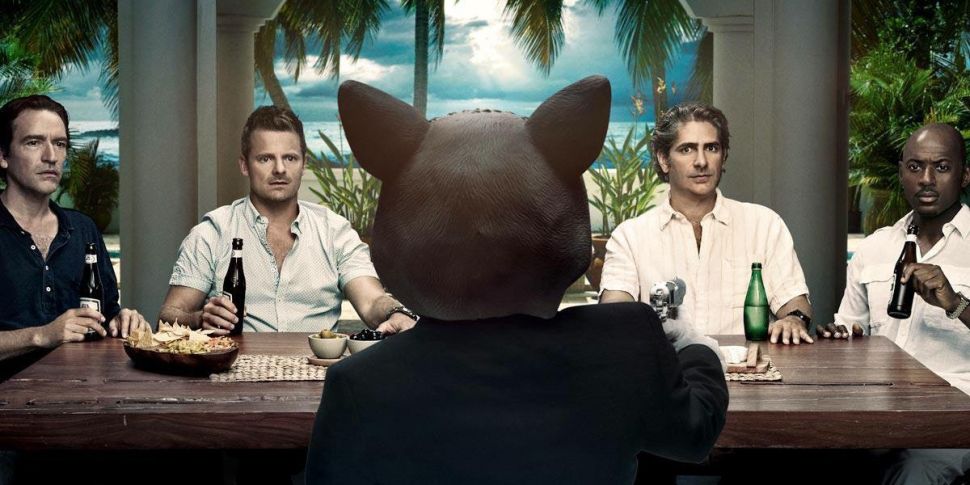