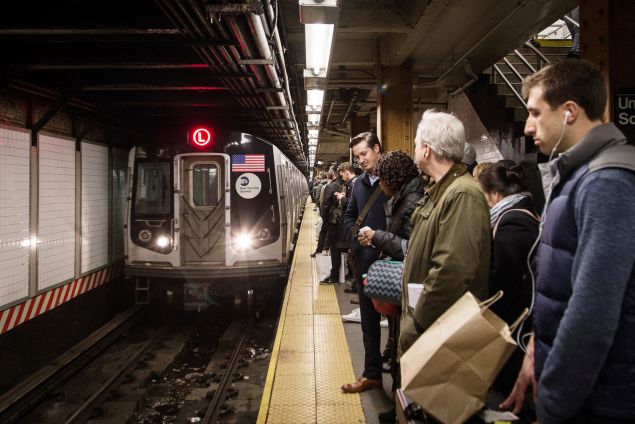 The panic begins somewhere around Bushwick. A hirsute horde pours out of shambolic loft shares to mount long boards and tall bikes and razor scooters, tearing off toward the city. It rolls west, gathering momentum as it goes, past the Grand stop, then Graham, Lorimer and Bedford, sweeping up in its wake a handsomely bespectacled throng of art directors, magazine editors, UX designers and the odd junior finance type—a desperate mob descending on the East River in a maelstrom of flannel and messenger bags and single-origin coffees, fighting it out fall-of-Saigon-style for Ubers and shuttle busses and Citi Bikes and water taxis. Their destination—Manhattan!—is just across the way and yet, still, so far off…

The L train is closing, people! Let’s all freak out.

In January the Metropolitan Transit Authority let slip that it plans sometime in the next several years to disrupt L line subway service, ostensibly to repair damage from Hurricane Sandy. The exact details have yet to be determined (the MTA pointed the Observer to a February 6 press release that notes the agency does not yet have a set plan or timeline for the work), but potential options include both a full and partial shutdown of the Canarsie tube that carries the L under the East River. In the former case, the project could be finished in around 18 months. In the latter case, the work would go on for several years.

Either way, it’s bad news for Brooklynites living along the L and, by extension, for real estate markets in those areas. What impact will the shutdown have on housing in neighborhoods like Williamsburg and Bushwick? Impossible to say, but the answer isn’t “none.” 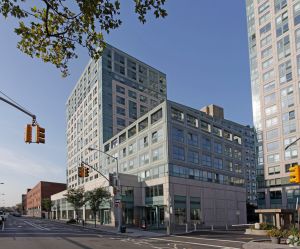 South Williamsburg and developments like Schaefer Landing stand to benefit from proximity to the JMZ train line. (Photo: Courtesy CoStar)

Bond New York agent David Kazemi said he’s had two clients shy away from apartments along the L in recent weeks. One, he noted, had specifically asked to look at places near the line prior to the news of the disruption.

“I had a listing right off the Graham Avenue stop, but when I told him about it [after the MTA announcement] he sort of pulled back, tapped the brakes,” Mr. Kazemi said. “So to think that no one is worried about this and that no one is talking about it, that is definitely not the case.”

“Williamsburg was definitely an option in terms of where we wanted to live,” one of the clients, Jennifer Wang, told the Observer. “But [the prospect of L train work] was a big turnoff.” Instead, Ms. Wang opted for Park Slope, where, she noted, “There are various subway stops.”

The MTA’s plans are still “up in the air,” Ms. Tickner said. “But they are already affecting the way people are deciding to rent.”

“We have spoken to our developers [to tell them] that they should have a reasonable expectation that when this occurs rental prices are going to be impacted,” Miron Properties CEO Jeff Schleider said, adding that his company represents hundreds of units either existing or under construction along the L line.

The sales side will likely be less affected, he said. “We don’t see it having a long-term impact on residential sale values simply because of the amount of infrastructure that has gone up and the amount of activity that is already built into these neighborhoods. The sentiment we are hearing in the market is that [in terms of] the purchase price of for-sale properties, the value seems to be holding steadily.”

“We’re about to list an apartment right next to the L on North 11th Street, and we are listing it at the same market price as before we found out about the L,” he said. “And I don’t think we’re going to have a big issue with it.” 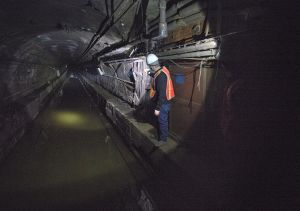 That said, Mr. Cox has seen increased inquiries from Williamsburg homeowners interested in taking their properties to market before work begins. “We had some people who were thinking about listing in the spring, and now one is going [to market] next week just to beat whatever rush there might be,” he said.

RealDirect CEO Doug Perlson said that he had observed a similar phenomenon.

“If you are thinking of selling in Williamsburg in the next year or two, you are probably thinking about putting your place on the market sooner rather than later,” he said. “So we have a few things brewing right now where the owners are looking to sell now rather than wait until there is some major disruption that could have an impact on the price they get.”

While sale prices will be less impacted than rents, a drop in rents could affect the investor sales market, Mr. Perlson predicted.

The news isn’t all bad. After all, people have to live somewhere, which means nearby neighborhoods on lines other than the L could see a bump. For instance, Mr. Perlson partially attributed recent price gains at South Williamsburg condo development Schaefer Landing (which is close to the JMZ lines) to the MTA’s L train plans. He cited a two-bedroom unit there that recently went into contract at $1,279 per square foot.

“North of $1,200 a foot was unheard of in this building a year ago,” he said. “I wouldn’t be surprised if this was in part a result of the conversations around the L train.”

In addition to South Williamsburg, Bed-Stuy stands to benefit from any L train outage, Mr. Schleider suggested, noting, particularly for Bushwick residents, the neighborhood offers a similar atmosphere and amenities and is comparably priced.

Halstead broker Hakim Edwards said he expected parts of Bushwick, Bed-Stuy and Ridgewood served by the JMZ to see an uptick in interest.

Siderow Residential president Joshua Arcus was less enthusiastic. “I don’t think places along the JMZ are incredibly desirable no matter what the situation is,” he said.

And might it at long last be Queens’ time to shine?

“I think Queens is going to be positively affected by this,” Mr. Kazemi said. “Because right now—it’s a relative term—but Queens is cheap. I was looking at an investment in Woodside, and it’s $600 a square foot. Where do you find anything at $600 a foot? You go to Bed-Stuy, people are buying for $900 a foot.”

Karla Saladino, a managing partner at Mirador Real Estate, told the Observer that in the last month she has seen a pickup in Brooklynites looking to relocate to Astoria. Long Island City could also see an influx of L train refugees, said Sha Dinour, the president of Triumph Property Group, which handles properties in that neighborhood and Williamsburg.

An L train outage could also benefit apartment hunters willing to deal with a few years of inconvenience in exchange for a bargain, suggested Argo Real Estate agent Alan Hedrick.

“There are several new developments going up in Williamsburg and depending on when they finish, buyers may actually be able to find a good deal, because people aren’t really going to be looking in Williamsburg,” he said.

‘If the MTA is smart and finally wakes up and puts money and thought into the G train, that will lead to another wave of [growth].’—David Maundrell of CitiHabitats

There’s a good chance, too, that L-dependent neighborhoods will come out the other side of the ordeal more desirable than ever. The MTA plan calls for improvements such as new stairs and elevators at the Bedford Avenue stop as well as additional electric substations that will allow for additional trains during rush hours.

Beyond that, there’s the possibility that workarounds put in place during the repair process will become permanent fixtures, adding to the area’s transit options.  For instance, an increase in G train service could greatly benefit Williamsburg and other neighborhoods along that line, said David Maundrell, the EVP of new development marketing for Brooklyn and Queens for Citi Habitats

“If the MTA is smart and finally wakes up and puts money and thought into the G train, that will lead to another wave of [growth],” he said.

“There is a broader issue that needs to be addressed beyond just repairing the L train,” said Mr. Schleider. “There is a tremendous [L] ridership, and this could lead to a better system of alternative transportation, whether it is the light rail that was proposed recently, express bus lanes on the Williamsburg Bridge, express ferries. A lot more needs to happen, and it needs to stay in place after the subway work is completed.”

“I think they’re scaring the hell out of everybody first,” Mr. Dinour said. “I think that’s [the MTA’s] strategy: ‘Let’s create some real panic, and then we’ll scale it down a bit.’ They’re managing people’s expectations.” 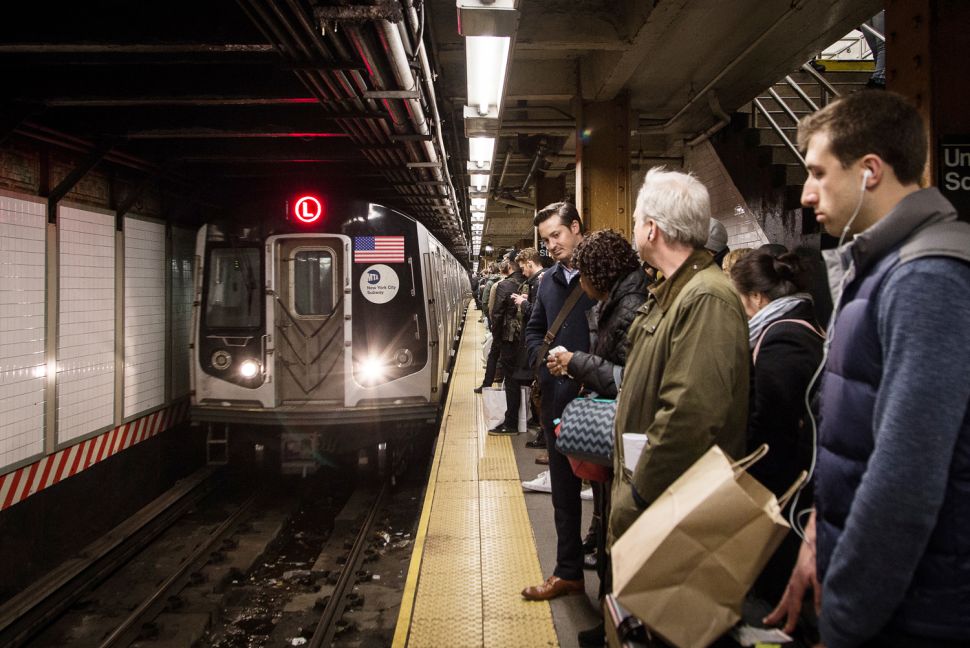