Let’s get this straight: I like HBO’s Vinyl a lot, and the show’s depth and intelligence consistently transcends its sometimes-glaring musical anachronisms. Since I am a former record exec, a punk rock didact, and someone who remembers the 1970s, I could easily go all comic-book guy and point out everything the show gets wrong; but I’d far prefer to note that Vinyl captures a moment in time better than most anything else I’ve seen, and it’s full of characters who are honest, well-drawn, and familiar.

I can overlook the more conspicuous errors in Vinyl (first and foremost being the fact that in 1972/73 there was no band in the U.S. or the U.K. remotely like the Nasty Bits; but I take this in stride as a cog in the narrative machine, like the way we accept that according to the movies everyone in Imperial Rome spoke with an English accent).

No one who knows a damn thing about the era would have characterized Slade as offensive to any would-be Bowery rebel.

However, I find that a few tiny inaccuracies are really pissing me off. I’d like to address two of these, both so specific and demonstrably incorrect that I have to believe they were inserted deliberately, as an intentional insult or to address some long-ago personal slight.

In other words, someone in the Vinyl operation clearly hates Slade and Status Quo.

In the first episode of Vinyl, office assistant/would be A&R star Jamie Vine (Juno Temple) and improbable Johnny Rotten/Billie Joe Armstrong hybrid Kip Stevens (James Jagger) both snort derisively when they hear Slade being played over the American Century office sound system. The implication is that Slade are the kind of boring, old-school ’70s music that the Nasty Bits and bright young insurgents like Vine are rebelling against.

They got this one very goddamn wrong. Slade, masters of the ultra-unsubtle riff’n’rumble, were fairly heartily embraced by the pre-punks; alongside the Stooges, Velvets, the Dolls, Mott and Bowie, Slade fans comprised the earliest punk fans and seeded the first punk bands. Very few would-be young punks would have found Slade distasteful; in fact, it’s far more likely the real-life Jamie and Kip would have gone, “Fuck yeah, Slade!”

Slade were a core influence on everyone from AC/DC to Sham 69, and their churning, chunky, monkey-simple three-chord splatter also inspired the Ramones, Slaughter and the Dogs, the Cockney Rejects, and a pile of other low-art, high-volume first-gen punk acts (not to mention the glam metal bands of the 1980s, who grasped Slade’s anthemic qualities but not their utter simplicity). No one who knows a damn thing about the era would have characterized Slade as offensive to any would-be Bowery rebel. So the reference was inserted either by someone who was ignorant of the glorious Slade sound (which bridges Little Richard and the Sex Pistols better than any other act, bar none), or someone who wanted to take a dig at the monstrously brilliant Slade.

Next: In episode 3, during the “roster trimming” scene, Richie Finestra (Bobby Cannavale) and the assembled A&R staff come across Status Quo on the list. They make a crack about “Pictures of Matchstick Men” and quickly drop them from their roster (by the way, when is someone going to note Max Casella’s extraordinary physical resemblance to Jim Rockford sidekick Stuart Margolin?). While it is possible that some American rock fans of the time might only know Quo from that one song, virtually any A&R exec would have known that by 1973, a re-stylized, resurgent Quo were having gigantic hits in the U.K. and Europe.

In fact, in the U.K. the name Status Quo is synonymous with boogie in much the same way the Grateful Dead or Phish are synonymous with jam band (seriously: mention the word “boogie” to any Brit over 40, and they’ll say “Status Quo”). In 1972, Quo had a top 10 LP all through Europe with the aptly named Piledriver, and in ’73 they hit No. 1 in the U.K. album charts with Hello!. Any American A&R person would have known of Quo’s overseas success, and they most certainly wouldn’t have dropped them lightly; they would have paused, done a line or three, and taken into consideration how releasing such a giant international act would have impacted overseas markets and Canada.

By the way, the success of Piledriver and Hello! was just the start for Status Quo. They went on to become one of the biggest British rock acts of the post-Beatles era, right alongside Queen and the Stones. Check this out: Status Quo had 22 top-10 singles in the U.K. (!), 57 top-40 singles (!!), four No. 1 albums (!!!), and 23 albums in the top 10 (!!!!). Let’s repeat that, just to piss off whomever in Vinyl HQ decided to have a chuckle at Quo’s expense: 57 top-40 singles and 23 top-10 albums (oh, and Status Quo appeared in the British album charts for more than 500 straight weeks, a stat that puts them alongside the Beatles and the Stones). Yet we are supposed to believe that some idiot A&R person at American Century dismissed them as if they were Zager and Evans.

Listen, there’s a reason Quo were chosen to be the band to kick off the 1985 Live Aid event—and they fucking scored.

I was fortunate enough to be at the Live Aid concert in Philadelphia; I was working for MTV News, scribbling copy to hand to VJ’s, ferrying three-quarter-inch video cassettes back to the production truck, and speed-cutting pieces to insert into the broadcast. I also found myself on the field at JFK Stadium at 7 a.m., when the live feed from Wembley Stadium in London crackled to life over the PA system and video screens, and I say this without hesitation: the most ecstatic, goose-bump-inducing moment of the entire 17-hour event was the very beginning, when Quo were introduced and they pounced, like a titanic cat with whiskers on fire and the entire earth in its claws, into “Rockin’ All Over the World,” the John Fogerty song Quo had a hit with in the U.K. in 1977.

For all the sweat, passion, obligatory superstar turns, pale reunions and occasionally mega-effective pomp and preening that followed on that long day and night, the most transcendent musical moment of the whole show, the moment that defined the power of the occasion, came in that first minute, thanks to Status Quo…


***
What ‘Vinyl’ Got Wrong This Week: The New Testament of Rock ‘n Roll 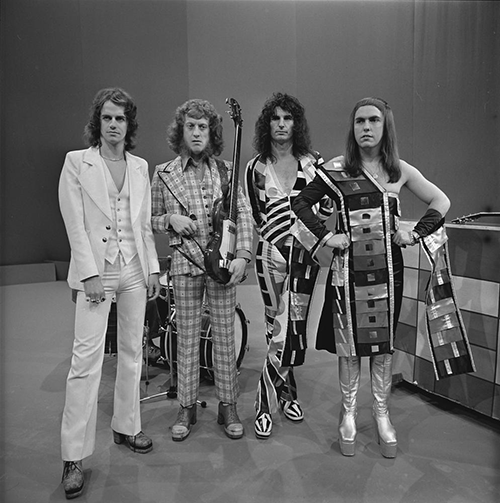