Six months had passed since actor Noah Bean wrapped a single scene in HBO’s Vinyl when he heard the news that David Bowie was dead at 69. In that moment, the 37-year-old’s single scene took on an extraordinary amount of extra weight and expectation. The role? The Thin White Duke himself, fresh off the Ziggy Stardust tour of 1972.

One almost has to expect, though,  a certain pressure to come with stepping into the (usually high-heeled) shoes of a musician-turned-icon, ascending for a while to the smoke-and-booze stained Mt. Olympus where rock gods dwell. Ask Mr. Bean. Ask Australian actor Zebedee Row, who in Vinyl‘s pilot played Led Zeppelin frontman Robert Plant moments before taking the Madison Square Garden stage. Or ask Dustin Ingram, who donned a face full of makeup and threw a python around his shoulders to portray Alice Cooper.

Over the course of four weeks, I spoke intermittently with Mr. Bean, Mr. Ingram, and Mr. Row about the pressure, the performance, and the high that comes with playing a legend, a star…a hero, even just for one day.

“I would drink some Budweisers or some Seagram’s and record myself reading the lines borderline inebriated, then I’d try and copy it sober.”

All three actors echoed the fact that once they landed their Vinyl roles, preparation for the part quickly delved into near infatuation, each man pouring over very Youtube clip, Spotify playlist, and long-ago recorded soundbite they could get their hands on. Research turned into practicality–Mr. Row’s band,the Harmonica Lewinskies,learned every Led Zeppelin tune they could. Mr. Ingram stuck cotton in his mouth, Brando-style, to simulate Alice Cooper’s larger teeth.

As for Mr. Bean: “I had to try and lose as much weight as possible in ten days. Bowie wasn’t a very big guy, but he looks so long because he was so skinny in 1973,” he tells me. “And it’s a tricky voice, Bowie’s, because he was always changing. I think vocally back then it was a slightly higher register than the Bowie we think of in the last ten, twenty years. All the years of cigarettes and everything probably dropped the octave a little bit.”

To physically become Alice Cooper, Mr. Ingram had to worry about more than losing weight; the opposite, actually. “Back then, Alice always had some sort of alcohol running through his body,” he said. “When I was in New York, I had plenty of time before we started shooting. I would drink some Budweisers or some Seagram’s and record myself reading the lines borderline inebriated, then I’d try and copy it sober.

“And [Cooper] says ‘You know?’ all the time. ‘You know? You know?’ after almost every sentence,” Mr. Ingram continued. “So I asked the writers if I could add a ‘You know?’ here or there.”

Some intricacies, however, didn’t come from video or vinyl. “In interviews Robert Plant is like stoned, and cool, and relaxed. That’s not the stage for my scene,” Mr. Zebedee said. “I read the scene and thought there was this little bit of sexual innuendo happening between Robert and Richie [Finestra, played by Bobby Canavale]. I mean coming from a time where gay and straight wasn’t really an issue, I just saw that little bit of flirtation between Robert and Richie, and I think [the casting directors] liked that.”

“You’re god-like. On set, there were hundreds of extras all staring at me. You’re like an alien. And I have to wonder: Is that what these rock stars feel like all the time?”

“There was a weird power that came with being in costume,” Mr. Ingram said, a sentiment echoed by all three actors. Vinyl is nothing if not detailed, from every gaudy inch of wallpaper on set to every pin and lapel of the 70s-era costumes, down to period-specific cans of beer.


“There was a moment on my first day of shooting where I had on some tight white jeans that were very revealing, carrying around this period Budweiser can,” Mr. Ingram remembered. “We’re shooting in Manhattan, crossing this incredibly busy New York street. I’m walking like Alice, trying to be like him as much as possible, and suddenly a group of people yell “HEY ALICE, WE LOVE YOU.” And that was it. I was him. I hope that somebody paid them to do that because nothing could’ve gotten me more into character than that moment.”

Portraying Robert Plant moments before arguably Led Zeppelin’s most iconic performance, Mr. Row agrees: “You’re god-like. On set, there were hundreds of extras all looking at me, but you’re in your own world. You’re like an alien.”

Mr Row paused, and then: “I have to wonder, is that what these rock stars feel like all the time?”

“I didn’t even know [David Bowie] was sick…So definitely, this performance took on so much more weight after he passed.”

The aftermath of appearing on Vinyl has been unique to each actor, but perhaps none weighed heavier than Mr. Bean’s experience. Not counting a Grammy tribute from Lady Gaga, he will be the first to portray David Bowie onstage since the musician and artist died on January 10.

“We shot my scene in [mid-August], before David passed. At the time, I didn’t even know he was sick. I don’t even think there was much in the press about him being ill,” Mr. Bean said. “So definitely, this moment took on so much more weight after he passed. My hope is that this moment–even though it wasn’t made with the intention of being an in-memoriam–hopefully it’s a truthful little complimentary glimpse of David.”

The pressure weighing on Mr. Ingram were less tragic, but came with the knowledge that a very real, very alive man would be watching the performance, and that man used to casually decapitate himself on stage five nights a week.


“I took some golf lessons beforehand, and that was actually the most nerve-wracking part of the whole thing,” Mr. Ingram said. “Because I knew if [Alice Cooper] scrutinized any part of my performance, it was going to be the golf swing. He is so passionate about it. He talks about it saving his life, about becoming addicted to golfing so he wouldn’t be addicted to alcohol.

“His daughter reached out to me on Facebook,” Mr. Ingram continued. “She told me the family watched the episode. She said, ‘Alice thought you did a killer job.’ Which I thought was an oddly appropriate way to put it.”

And for Mr. Row, a musician himself, it was not only the sets, costumes, and cameras that stuck with him. It was, appropriately, the music that changed him the most.

“When we walked up to the stage and the lights were shining, the music came up, the sound effect of an audience blended into it, I really felt like that was what I was there to do. I wasn’t acting,” Mr. Row said. “I’m a guy that’s played many gigs in my life, and nothing compared to that moment.” 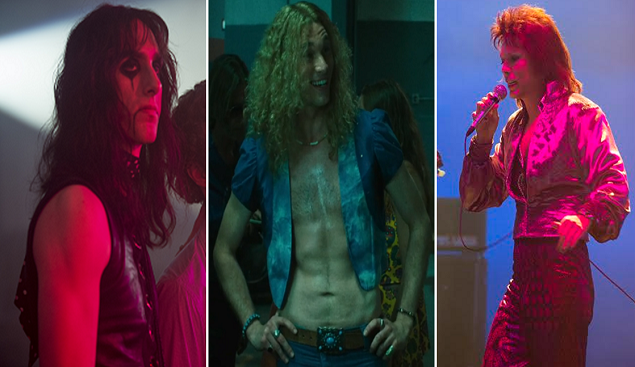