When real estate tycoon Donald Trump pulled out of next Monday’s scheduled Republican Presidential debate on Fox News Channel, he once again showed Fox who is boss in this primary season. Hint: It isn’t Roger Ailes, who runs Fox.

“I think we’ve had enough debates,” Mr. Trump said on Fox air. “ . . . How many times can the same people ask the same question? Nobody told me about it and I won’t be there, no.”

Perhaps he would be interested in a different sort of debate: Liberal against conservative, Democrat against Republican, even before the conventions. In honor of college basketball’s March Madness, one of the networks could sponsor a “final four” challenge among the top survivors thus far.

You can understand why Mr. Trump wouldn’t want to face his fellow Republicans again. He is leading the race for the nomination. Why risk making a mistake in a 13th. debate?

In the next round, perhaps a week later, switch partners, the way folks do at the square dance. That would pit Mr. Trump against Mr. Sanders followed by Mr. Cruz against Ms. Clinton. Nobody would be eliminated, the way they are in the real Final Four. But the viewing voters might be enlightened and entertained.

You can understand why Mr. Trump wouldn’t want to face his fellow Republicans again. He is leading the race for the nomination. Why risk making a mistake in a 13th. debate?

Why should he allow himself to again be grilled again by Megyn Kelly, the hot-shot Fox news actress who drew Mr. Trump’s ire way back in the first debate with a loaded question that alleged sexism and misogyny through Mr. Trump’s past statements.

It was the rhetorical equivalent of a protester getting sucker-punched at a Trump rally. This is the second time Mr. Trump has backed out of a debate. The other one was on Fox as well. It went on as planned, but played to lower ratings without the former reality TV star.  This time, the debate was canceled.

Mr. Trump rubbed it in by announcing it on “Fox and Friends” on Wednesday morning in a telephone interview with Steve Doocy, Ainsley Earhardt and Brian Kilmeade.

“And I might as well give it to you first, Steve, because you’ve always been so fair, the whole group,” Mr. Trump said. “This is my group. I love this show. What can I tell you? Do I have good taste or bad?”

When the three Fox hosts gently tried to change his mind, Mr. Trump stood firm. But might he be enticed along with the other candidates of both parties to try a new and different format that shuffles the deck and freshens the dialogue?

Of course, there will be objections, the first being that this has never been done before.

This is true. And there were no televised presidential debates before 1960, either, and not another one until 1976. The “debate” format is flexible; and there is nothing in the U.S. Constitution that says they couldn’t try another method. (The Founding Fathers had no televisions). Besides, there never has been a campaign quite like this.

After months of debates with both parties, the viewers can practically recite a candidate’s answer as soon as the question is asked. By having liberal Democrats and conservative Republicans confronting each other directly, new arguments – and new attacks – would change the dreary tone.

But what if Mr. Trump wouldn’t cooperate?

Sure, that’s his right. Simply replace him with Ohio Governor John Kasich, who won his own state over Mr. Trump on Tuesday and is the third-place survivor on the Republican side. By boycotting, Mr. Trump would risk ceding the spotlight to the two opponents who hope to upend him at a contested convention.

The idea might offer some appeal to all candidates. Ms. Clinton, the former Secretary of State, might appreciate the chance to inflict some early wounds on the two men who have the best chances of opposing her this year. Mr. Cruz, the Republican Texas senator, is a former debate champion who fears no man or woman in such combat.

Mr. Sanders, the avuncular Democratic socialist senator from Vermont, gives the impression that he would talk with anyone about anything anytime. He’s Uncle Bernie, the life of the party at Thanksgiving dinner.

Mr. Sanders, the avuncular Democratic socialist senator from Vermont, gives the impression that he would talk with anyone about anything anytime. He’s Uncle Bernie, the life of the party at Thanksgiving dinner. And Mr. Kasich, the Ohio governor, could shine again as the only Republican presidential candidate that some Democrats can stand.

BUCKLE UP, BRIAN: Maybe they should put a seat belt on the chair of Brian Williams, who anchors the big stories on MSNBC. For election coverage, Mr. Williams sometimes shares the studio set with at several panelists. He sits on the far left on your screen..

But when Mr. Williams tries to talk with them, he often leans so far to the right that it seems he is about to tip over. Maybe they should re-configure that set at 30 Rock before Mr. Williams has to take another leave of absence, this time on the disabled list.

SAY WHAT? Speaking of falling off the chair, CNN’s Brooke Baldwin on Tuesday interviewed Jerry Springer, the former mayor of Cincinnati who went on to host a violent and confrontational television show.

Ms. Baldwin asked Mr. Springer what he would ask Donald Trump if he could ask Mr. Trump one question.

Mr. Springer paused a beat and then said he would ask Mr. Trump: “Have you ever been a woman?” Ms. Baldwin burst out laughing and fell so far to the right on her chair that she was briefly out of the camera frame.

O’REILLY GETS KRAUTHAMMERED: On Monday night on Fox, The O’Reilly Factor included a chat with Charles Krauthammer that got a little testy.

Host Bill O’Reilly began his show with a sermon that created a false equivalence between Mr. Trump’s storm troopers and the supporters of Mr. Sanders, some of whom show up to protest at Trump rallies.

“The protesters at the Trump rallies are the real fascists,” O’Reilly concluded. He preceded Mr. Krauthammer with a video of Sarah Palin introducing Mr. Trump with a loud, scrambled screech.

“Well, it’s refreshing to hear Sarah Palin,” Mr. Krauthammer began, his voice dripping with sarcasm. “It’s that kind of reasoned, calm rhetoric – political rhetoric – that we really need in this country. And it’s so welcome when we can hear it from her.”

The conversation drifted into menacing statements made by Mr. Trump, who frequently denounces the commentary of Mr. Krauthammer.

“It’s a serious and worrying story,” Mr. Krauthammer said of Mr. Trump’s taunts. “This is a presidential candidate who addresses a crowd and says of a protester `In the old days, we’d be carrying him out on a stretcher,’ meaning he’d be so thoroughly beaten up he wouldn’t be able to walk.

“This is a guy who says of another protester, to a crowd, `I’d like to punch him in the face.’ This is a candidate who, after one protester is punched in the face – we’ve all seen the video — a sucker-punch to a guy who was not attacking anyone.”

Mr. Krauthammer was just getting warmed up. He criticized Mr. Trump for not condemning the attacker.

“Speaking of this man, he said `Well, he was at the end of his tether’ and then he said `He’s obviously a man who loves his country,.’” Mr. Krauthammer said, in reference to Mr. Trump’s defense of the sucker-puncher. “What is obvious about the love of country of a guy who hits a protester in the face with a sucker-punch?’”

The man who threw the punch later said he might have to kill that protester next time, Krauthammer said, before turning his wrath on Mr. O’Reilly.

“Are you letting Trump off the hook on this?” he asked.

Mr. O’Reilly’s expression hardened and he licked his lips. With most guests, this would have provoked thunder and lightning. But Mr. Krauthammer seemed to intimidate the veteran host.

“All right, I’m trying to deal with this in a fair and balanced way, all right?” Mr. O’Reilly said. “So I think we’re going to remove the word `weasel-y’ from that.”

He went on to explain “Trump speaks in an emotional manner . . . He speaks like this: `Bang, bang, bang, bang!’” Mr. O’Reilly emphasized this by snapping his fingers four times.

“And he doesn’t have a filter,” Mr. O’Reilly continued. “He doesn’t censor himself. He doesn’t think sometimes before he speaks. That’s what a billionaire businessman has done his whole life . . . And I hope he does because if he doesn’t, he’s not gonna win the presidency . . . but I’m not gonna sit here and say that Donald Trump is responsible for what happened in Chicago.”

By this time, Mr. O’Reilly was pointing his right index finger at the camera. He was in New York. Mr. Krauthammer, on a split screen, was in Washington.

“That’s not what I said,” Mr. Krauthammer said.

KRAUTHAMMER: “But he is responsible for condemning it.’’

O’REILLY: “Yes. And I would have done that myself.”

O’REILLY: “I’m not saying why. I’m just giving you an explanation, not an excuse.”

KRAUTHAMMER: “How hard is it to make the transition, to be able to say, when you see that kind of assault, `I condemn it.’ And not to say `It’s obvious this man is a patriot?’” 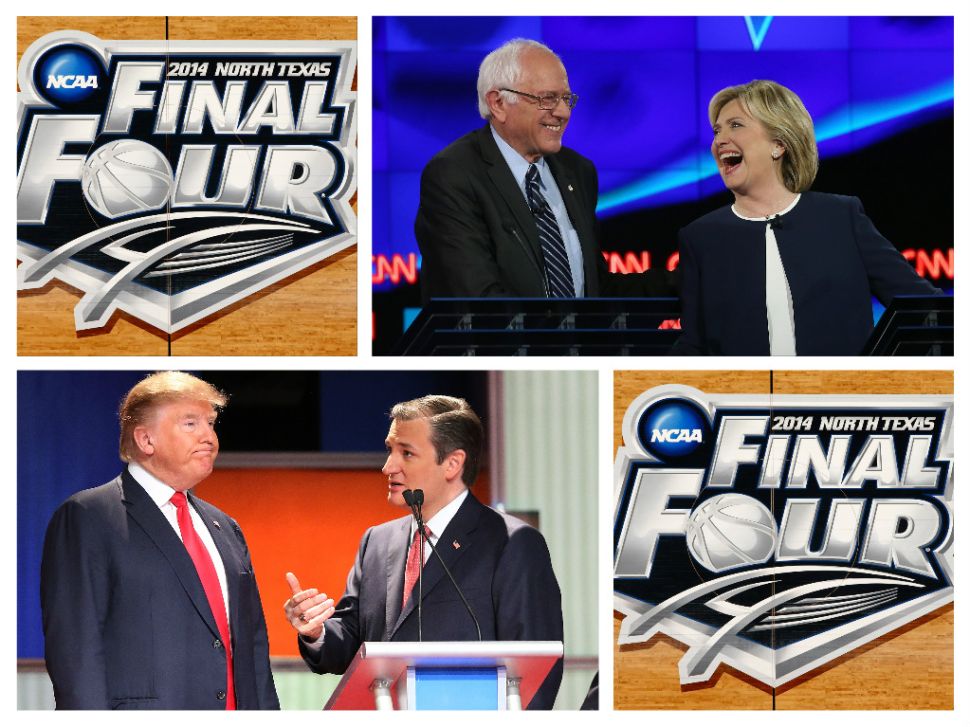