The fourth season of Netflix’s House of Cards was released for mass consumption a little over a week ago. By now you’ve certainly had a taste — or a utensil-free, napkin-less binge — and you too might have found yourself marveling at how good the show is again, especially in light of what came before. After two lackluster seasons, consensus was that the relatively young prestige show might have been a flash in the pan and many were ready to track House of Cards’ slow decline into tacky, high-production melodrama. Instead, we saw its glorious rise back into the high-production melodrama it was always meant to be.

With season 4, the show fully embraced the fact that its buzziest moments all fall into pure melodrama. Orchestrated suicides, train pushes, public shootings; Under that pristine, Netflix budgeted sheen, it’s all one rapid camera shutter away from ABC Scandal territory — and that space of stretched credulity is where the show best functions.

After being underwhelmed by Season 3, and supremely bored by Season 2’s Chinese bridge shenanigans, Season 4 succeeded largely by focusing on the show’s strongest asset: Robin Wright’s Claire Underwood and reminding us that she is not the wife of a power-hungry, sociopath, but a power-hungry sociopath in her own right. If we remember, the underlying thesis of Claire’s character has been explicitly laid out since Season 1: the want to be significant.

Wright, a director and as of this season Executive Producer for the show, has always been central to its success but Season 3 found Claire, and by extension the viewer, languishing in her dissatisfaction as Frank’s First Lady as she failed to gain any momentum against the likes of Viktor Petrov (Lars Mikkelsen) and lacking the anchors like Golden Retriever Meechum or Rottweiler Doug Stamper that tether Frank to the ground. Season 4 finally activated all of Claire’s underlying dissatisfaction and greed, funneling it into a thoroughly ridiculous gambit that even Frank could not help but scoff at: to not only be First Lady, but also Vice President to her husband. This season takes pleasure in separating and reuniting the Underwoods, underlining the notion that while they are both power-hungry and highly functioning sociopaths separately, they are stronger when together; something that, for all her marital dissatisfaction, Claire openly acknowledges.

There is no need for tacky flashback wigs in excavating Claire’s wealthy and dysfunctional past. A lizard-ridden Dallas, TX estate right out of a Faulkner short story, along with a few exchanges with her dying, domineering mother — brilliantly played by Ellen Burstyn– answers any lingering question viewers might have had about her upbringing and life before Frank Underwood. Claire is far from the severe ice queen, she often appears to be, but a thoroughly compartmentalized character that keeps the various facets of herself under control at all time, so much that she herself appears to lose sight of her core.

Be it for Frank, for Petrov, or for an audience of potential voters, or her own mother, Claire knows exactly which persona to adopt and each of them ultimately amounts to an affected show of strength. Be it the emotional strength that plays so well to the voter base when she tearfully pleads for gun control, or the ruthless equal she performs for Frank in the first arc of the season, showcasing herself as an equal, Claire is a performer who views power — true political power — as the ultimate freedom from these many roles she’s learned to play over the years.

With Russo and Zoe Barnes dead, the past few seasons of HoC have felt devoid of proper foils for the magnetic Underwoods. And despite their open marriage, the Underwoods likewise don’t have love interests — they have bedwarmers. Claire never had more than a passing attraction for photographer Adam Galloway who functioned more like an exhaust valve from DC than anything else. With Meechum having completed his fantasy of serving Frank to the fullest by taking a bullet for him, the role of marital guest fell to biographer Tom Yates, who return to become Claire’s companion in the later half of the new season. Yates may be as disposable as previous lovers, but he stands apart in that he seems to understand the Underwoods as a complementary pair rather than individuals, which is perhaps the best way to approach them.

Beyond Claire herself, Season 4 builds on everything that’s come before, reintroducing character after character and reminding us of the trail of dead bodies the Underwoods have left in their wake at every corner.. Even from the White House, they are not unassailable and the assaults are coming from all sides. Stray bullets, pieces, to allies turned enemies, dissatisfied staffers, and equally-greedy political opponents, the Underwood’s empire was irrigate to crumble from the very start. House of Cards is not a show that can live on forever and seemingly — hopefully — knows this.

Last season ended on the simple decision that Claire was leaving Frank. This one ends on a paradigm shift. With the wagons starting to circle around them, it’s interesting that the season ends on a note of strength and borderline mustache-twirling villainy for its two leads. The murderous Underwoods are done playing in ”the grey.” They’ve been on their best behavior within the halls of power keeping their scheming to backroom dealings and theatrics. By all but green-lighting the public and gory execution of an American on live television, they are choosing ‘fear’ as their primary weapon for Season 5. (We half expected Claire to speak that last line to the camera there, didn’t we?)

An ongoing tension remains the looming inevitability of the Underwoods’ downfall and the show’s obsession with seeing them in control and thriving in a sea of adversity. Eventually, a choice will have to be made. But for now, House of Cards has successfully been restored to its original glory and remains a thoroughly enjoyable respite from our own Trump-ridden, TLC-reality show-level politics looking ahead to November — albeit one that works best when aware of its finite lifespan.
Ben Philippe is a TV contributor for the Observer. His writing also appears on the A.V. Club, Gawker, Thrillist Entertainment, BuzzFeed, and others. His interests include and are limited to television, comedy, and dogs. Find him on Twitter at @GoHomeBen. 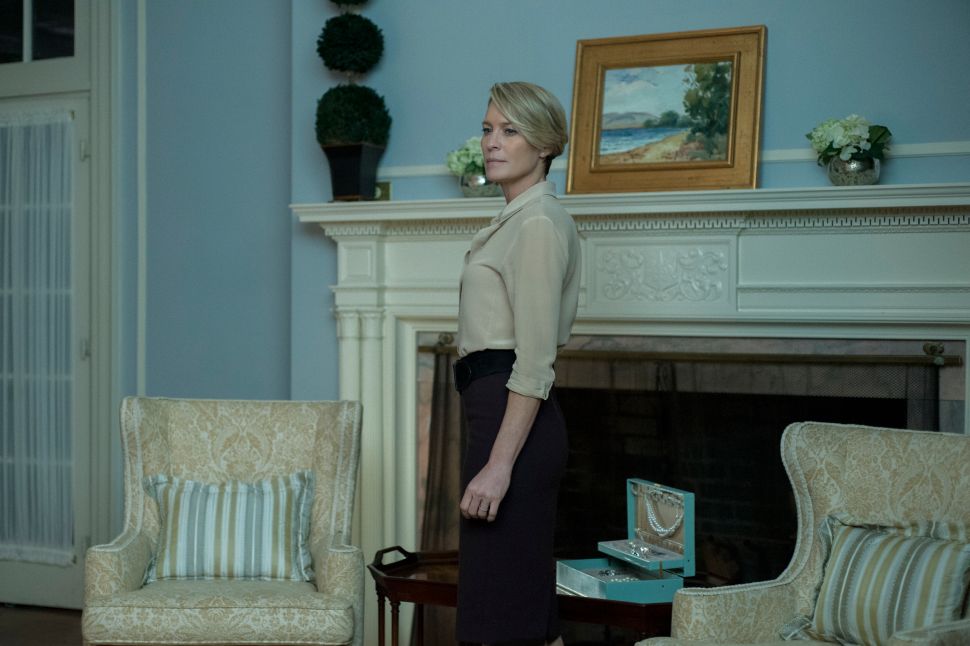