I’m sorry, that’s a crude question but it’s the ONLY ONE LEFT! There are no other things to discuss! Jake saving the Dunnings by murdering their father? Bill leaping to his death from a loony bin window? Jake stopping Lee Harvey Oswald from murdering John F Kennedy Jr, forever altering the universe as we know it? DIDN’T HAPPEN!

The amazing thing about the amazing finale of this amazing, dumb-as-balls beautiful show is that in the very last moments, the single solitary plot point we’re left with is whether or not James Franco has sex with a woman 40 years his senior.

Drew: I mean, to be fair, this is also how the book ends, so I give a lot of credit to sticking to the source material. Though the book ALSO made sure Jake went back one final time NOT just to hit on a young Sadie that he’s got to be a decade older than, at that point, but to put a phone call into the Bill-type character to make sure that Sadie doesn’t get that big face scar and the janitor doesn’t have his family murdered.

Because, great for old Sadie and all, but you’ve got to imagine that the old man she’s hugging at the end still smells like bleach and repressed grandma issues. 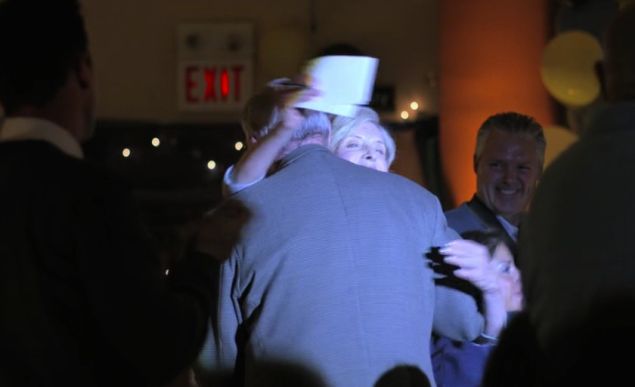 I guess it’s cool now that the kids just call what he’s got a “Prince Albert.”

Vinnie: Before we return to the future, let’s talk about that big climactic November 22 of 1963. Crank up the dramatic music! 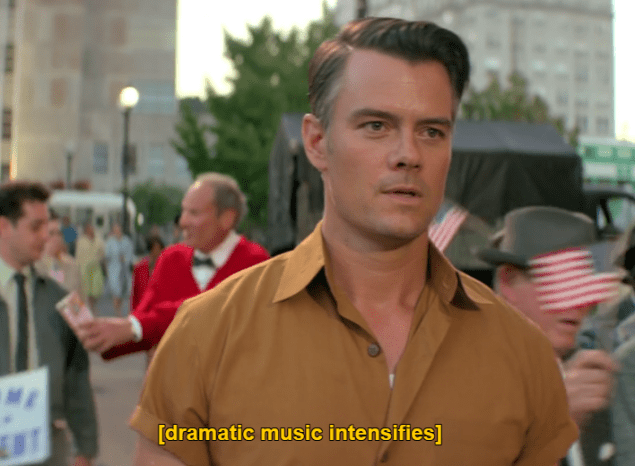 Vinnie: Two things I noticed.1) James Franco is terrible at fake running through a crowd. Go back and watch the first five minutes of the episode, and watch out for the moment Jake just blatantly wacks a dude on a bike in the face and is like “Oh sorry oh sorry oh.”

2) But even worse at its job is the past itself, which when it comes down to it is pretty terrible at keeping itself together. I know what you’re thinking. The past threw a fancy out of control convertible, actual ghosts, and some grammatically incorrect graffiti in Jake’s way which is all well and spooky. But you know what would work better? One locked door. Jake runs into a door that is locked–not “stuck,” not “slightly obscured,” just locked–and blam JFK is dead.

Drew: Not to harp on how pointless this all was, but could there be a better metaphor for both Jake’s quest and this show in general than the scene where Jake causes a Thunderbird to ram into a bus full of black people?

Haha, the past is going to be so embarrassed when it realizes how inadvertently racist it was! (As opposed to how overtly racist it was, which it totally stands by. Hashtag #PastSoWhite.)

THOUGH: this moment where civil rights activists are literally thrown under a bus (or I guess literally thrown IN a bus) isn’t quite what it seems! Did you catch the name on the side? “Faith Heritage Alliance;” i.e. the religious org that funds and endorses the Antichrist Greg Stillson’s run for Congress in The Dead Zone. (And this was all before super PACS were even a thing!)

So…yay? I mean, ultimately, just like everything else in this show, the effects are negated when Jake goes back to the future (YES! FINALLY! A CHANCE TO USE THAT PHRASE ORGANICALLY IN A SENTENCE!) (My work here is complete!) (*Goes back to the future*), leaving us with a sum zero balance of shruggy “who gives a shit” emoticons.

But still, what a horrible, unnecessary moment that was! If I was a different writer, I’d probably take this scene as an acknowledgement of Jake’s white time-travel privilege. But where I’m going, we don’t need 3,000 thought pieces. (The future is great, btw. It’s all parakeet videos, all the time.)

Vinnie: This week’s entrant into the Epping Hall of Lame comes courtesy of the look Jake gives Sadie when Lee shoots Jake’s gun out of his hand. It just screams “Yikes-a-doodles Sadie I am blowinggggg this.” 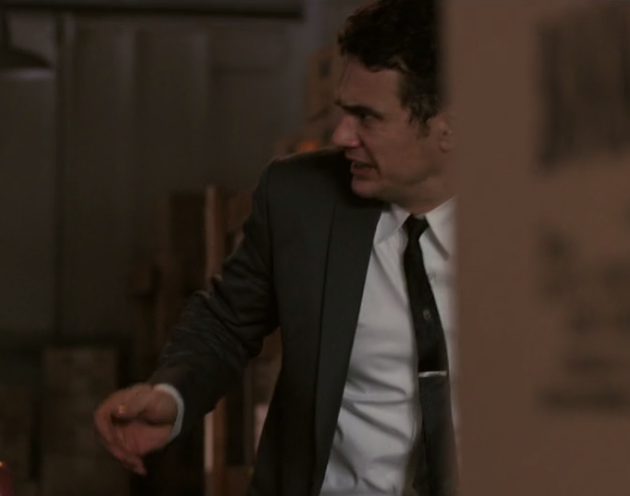 I am shocked, SHOCKED, he didn’t pull on his collar and make the nyeahnyeah awkward noise.

Drew: Jake is definitely a Charlie the Intern right now. But also, Jesus, what a shit-poor plan. After eight weeks, I still have to remind myself not to just complain about how stupid and ill-conceived Jake’s whole scheme was. Why didn’t he burn down the book depository? Why didn’t he kill Oswald earlier? Or lock Oswald in a basement? Or held Oswald’s mother hostage, like a horrible Theo Galavan type? What’s the point of knowing the outcome of future events–the where, the when, and the who–if you aren’t going to use ANY of that knowledge and instead have to rush around last minute like a procrastinating MFA student who forgot to turn in his dissertation and hopes that his performance as Ginsberg in Howl: The Movie counts for graduation credit.

Vinnie: It would have been nice for the show to throw Sadie a bone in that book depository scene. Like, even a nugget of an illusion of a reason for her to be there other than to get pulled up the stairs by Jake, hide behind a box, and (somehow) get shot. Like, I don’t know, have her kick Lee in the shin or something. You can’t have a character command a scene as the sole action hero if that character is also played by the third best on-screen Green Goblin.

Drew: Oh my god, I would have LOVED to see Dane DeHaan or Willem Dafoe take a crack at this. “SADIE, NOOOOO!”

Vinnie: I can’t believe after setting up so many batshit bananas crazy things in THE PAST–mostly referring to the clothespin here, but come on–when 11.22.63 finally returned to the present day to show the spooky aftermath of changing the past  it was so, so boring. It was never going to be a twist, per se. I mean, raise your hand if you said to yourself over the last 8 weeks “hey fucking around in the past might actually make things worse, no?”

But at least visually they had a chance to do something fun–think Back to the Future 2, or fucking Hunger Games I don’t know–but instead Jake came back to find the whole world had just turned into downtown Detroit. That’s…a bummer, yeah, super bummer, but it’s not interesting. Jake couldn’t even destroy the universe correctly! At worst, he mildly inconvenienced the universe.

Drew: DOWNTOWN DETROIT IS EXACTLY WHAT I THOUGHT! It’s like a post-Robocop scenario though, where there aren’t even any bad guys left. There are hardly even Cormac McCarthy’s The Road-style bands of roving marauders camping out by a fire. This is bullshit.

Also, wasn’t it kind of super-vague what actually HAPPENED? Like, in the book, it’s pretty clear that it’s Kennedy’s FAULT the world turned out this way: he never stops Vietnam, so everything escalates to World War III. But in this, we still need to keep the “Kennedy is the best!” vibe going, so instead the janitor dude is like “Kennedy refugee camps? THAT Kennedy?” But confusingly, doesn’t seem to know what Vietnam was. Did Jake somehow prevent a war that was already happening as well as Kennedy’s assassination? Or is this just the product of a brain mangled by the re-education of American history at the Kennedy Refugee Camps (™)?

Vinnie: The show immediately redeemed itself by having Jake go back BACK in time, stumble into a diner covered in mud and way too much of his own saliva, and lumber up to Sadie’s table like “HEY [deep, frightening gasp], we know each other.”

And then Sadie is just charmed, as if the deranged homeless man who knows her preference in books isn’t the most terrifying shit she’s ever seen.

Then, THEN, after a quick talk with the time-traveller from The Mummy, Jake, still soiled and I can only assume reeking of time-travel, is like “No, nevermind, forget all those intimate details I know about your life.” This is the reason so many young blonde women disappeared in the 1960s (I assume).

Drew: WAIT WAIT WAIT HOLD UP! Are you saying there is ANOTHER guy from The Mummy in this show? Besides Jonathan Hyde, who isn’t in the show, but who was in Jumanji, and who I discussed extensively in last week’s 11.22.63 conspiracy-laden plot? HOLY SHIT. Just because I’m paranoid, Vinnie, doesn’t mean “they” aren’t out to get me. And by “they,” I mean increasingly inept FBI agents who try to act badass for a whole two seconds before they confirm that they’re about ten paces behind Tommy Lee Jones’ character in No Country for Old Men.

Vinnie: So one time my high school teacher started crying during class and we all felt bad because we assumed it was because of the divorce but now I know it was probably because he was secretly a time-traveller that failed his mission and woo boy, let me tell you, that is a load off my mind.

Drew: Is it kind of cool that Kennedy–if he had lived–would have been able to tell before the FBI whether a guy was a terrorist or had saved his life? Because the FBI is going to book Jake on the assassination attempt but then the president calls and is like “Guys, clearly this is a time traveler. Let’s treat him with respect and one free voucher to our refugee camp(™).”

Vinnie: In the end, the only thing I’m upset over is that old-Sadie wasn’t just young-Sadie in elderly makeup, because after everything 11.22.63 has presented to me over 8 wonderful episodes–clothespins on dicks, James Franco’s acting, Bill pretending to be a real human boy and not a wooden puppet brought to life–THAT is where they draw the line?

Drew: I’m going to miss you, 11.22.63. Sure, you were stupid and arbitrary and full of gaping plot holes. But then again, so is real life. So is real life. 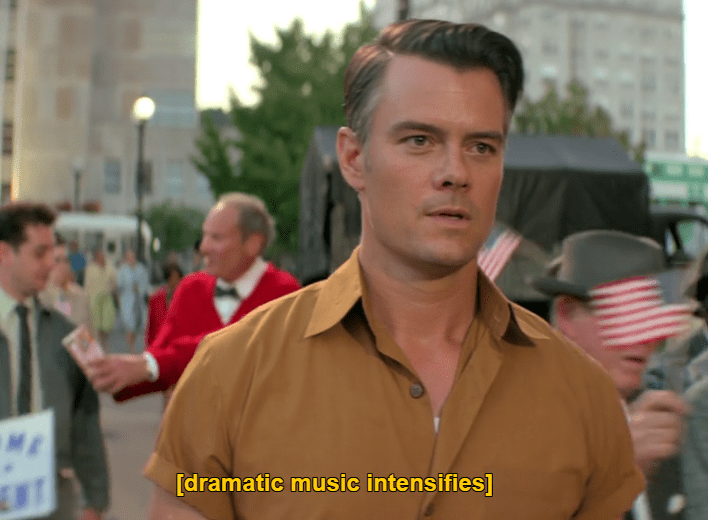